It’s about an hour before Kaitlyn Aurelia Smith will play in MoMa’s courtyard, and though museum staff has offered to escort her to her greenroom, she’s content just hanging out in the audience. “I prefer being outside,” she tells them with a smile. After listening to a fan tell her about his experience making music on his synthesizer (she’s a good listener) Smith becomes enamored with the pink/purple color palette and geometric patterns on the shirt of the man sitting in front of us. “I wish those were my colors,” she says in reverence. “But then I wouldn’t be able to look at them!”

Smith regularly experiences the phenomenon of Synesthesia, wherein the stimulation of one sense triggers another sense to respond accordingly. For her, the color palette of each thing she sees has its own distinct sound.

But this is no condition, nor anything she’s “suffering from.” To the contrary, Smith has fashioned her cross-sensory perception into gorgeous, spacey compositions for her Buchla modular synthesizers. The challenges and rewards of her current Buchla Music Easel poses lie in its unique design, a combination of touch-sensitive keys and modular jacks that requires time to learn but ultimately allows the composer to create new, unheard sounds of warmth and texture.

Designed by Don Buchla, a former NASA engineer and tripster who attended the storied Ken Kesey Acid Tests, Buchla synthesizers evoke a key focus of the hippie’s quest for utopia—the embrace of emerging technology as a means of awakening consciousness. The same trend of scientists making trippy things continues today in the work of Floating Points, neurologist Sam Shephard’s blissed-out, jazzy, ambient electronica. I’m not surprised to learn that Shephard and Smith are dear friends.

Suffice to say that when Don Buchla started making these things in ’63, they had no sonic precedent (the original Buchla used two different kinds of quartz and separated audio signals from control signals, producing a completely different range than Moogs), and even today Buchla synths remain associated with New-Age avant-garde.

Smith is truly part of that legacy; the signs that she’s on her path are everywhere.

Take Smith’s discovering that she was neighbors with famed New-Age Buchla player Suzanne Ciani as but one of the cosmic coincidences that follow her. The two have collaborated for Sunergy, the 13th release in a series of collaborations called FRKWYS on RVNG Intl., out September 16.

The Observer spoke with Smith ahead of her MoMa show, part of MoMa’s Summer Thursdays. That evening she blessed us with a stunningly transportive performance that weaved the lush and wonderfully hallucinogenic soundscapes of last April’s EARS into the new, tighter and more immediately hummable new tunes.

The fact that she’s just released a fantastic record, spent the spring with Animal Collective, and is already diving into recording her follow-up speaks to Smith’s tireless love of composition and performance (she also composes for film). But her constant state of creation speaks to this great spark inside of her, too, a sort of sonic shamanism, wherein the Buchla simply becomes a medium for translating her otherworldly message of warm serenity.

I’m really interested in the idea of you recording with visuals in your head, and recording inspired by colors, you’ve talked about that before. Is that synesthesia, and do you think you have it? Was it an innate thing or something you developed later based on your environment?

You’ve had these feelings before you knew they had a name?

I’ve had them my whole life, with textures, with visuals and sound. I also have ASMR (autonomous sensory meridian response), which a lot of people have. Do you know what that one is? It’s where you get very physical reactions to sounds.

People get that in certain states of mind, chemically or spiritually induced, right?

Yeah, but there’s very specific sounds that trigger it for people. The most common one is this whisper with an “s” or Sean Connery’s voice. But it’s a very distinct feeling that starts right here [she points to the middle center of her head] and goes down the spine. But I have it in all these different variations, and I get it in these combinations of visual and physical, where the way that someone talks could sound like a hollow balloon that someone is scraping on the inside. I’ll get these very physical and visual associations.

You said it starts right there?

Yeah, and then it tickles you.

Well the reason that’s the location of the seat of the soul for Descartes…when someone tells me a joke or something so profoundly funny that it’s almost funny it tickles me in the same spot. So it’s fascinating that our Pineal gland is located right there.

It’s endlessly fascinating to me that we secrete DMT, this natural psychedelic compound, organically from that part of our bodies. And then there’s this other idea that holy people in other countries just train themselves to do that on the regular. I mean, that’s kind of this weird place in the body to me because so many separate spiritual experiences are triggered from this single place, so many different religions thousands of miles away associate that place with a sacred reverberation throughout the body. So you’re saying that phenomenon happened even before you knew about any of this stuff, yeah?

Yeah, that in combination with visuals, it’s a threefold [textures, visuals, sound].

What colors illicit what feelings?

It’s not like that, it’s not like “this emotion is mustard yellow.” It’s usually full visuals or full textures.

Are they defined or quantifiable?

Yeah, and in the beginning it’ll just start with a color palette, a hue palette, where it’s in pastel category or something more vibrant. But it changes all the time.

Are you classically trained?

On classical guitar. But I also compose orchestral music. That’s what I studied at school, and film scoring is something that I pursue.

I guess I don’t understand how the crossover of those worlds works. You just played The Broad in L.A. last week and you’re at MoMa tonight. Is an art museum a more comfortable place than a festival or concert venue for what you do?

I feel fine playing festivals, and I really enjoyed touring with Animal Collective. It was all fun. They have an amazing, very receptive audience. After I would play I’d go out and watch every night.

How did your vocals develop? They sound almost medieval, Gregorian. Like I’m in a really important hall surrounded on marble.

Oh interesting, that’s definitely your experience [laughs]. That wasn’t my intention, but that’s cool to hear.

What was your intention?

Just to create a large vocal sound, kind of airy and grainy. It really happened organically over two years, just thinking about how I wanted to process my vocals. Because I knew that I didn’t wanna just sing over the synthesizers, I wanted it to have some sound that would fit in there, somehow. It really did just happen organically.

As did you switching over from the guitar to the Buchla, right? Tell me about that. Was it just a device to express that synesthesia? Love at first sight?

Yeah, there’s many Buchla instruments and right now I’m playing one that’s different than the one that I learned on, but discovering modular was definitely love at first sight. I was studying orchestral music and didn’t have an outlet for that, really. When I found modular synthesizers I experienced being able to create many lines and many different textures and sounds, like how I would for an orchestra. [I] didn’t really turn back.

These modular synths can be such a commitment, such a labor of love to haul around live. Is the Buchla the most portable, practical way of getting such warm, real synth sounds?

As far as Buchla goes, this is the most portable. A little suitcase you can fit under your seat on the plane.

You first started playing live with an indie-folk project. What did you learn or unlearn between that and the music you’re currently composing?

That project was just mine. For a few shows I had a few musicians playing with me, but I’ve always played by myself. When I toured by myself and opened for Iron and Wine it was still a solo thing. I guess that I still am taking influence from orchestral composition and songs, and now adding in synthesis. The three worlds are combined.

Cool! And you saw colors then, too, I imagine. What were they then as opposed to now?

It’s very specific to a sound, not “this is the era I’m seeing.” Someone’s voice does it, a fountain. Everything has something to it.

“The visual that I got when I was writing this new album was one giant, Frosted Shredded Wheat that someone’s breaking. So I kind of started going with that vibe for this album, and it’s evolving into many other things.”

How does this idea of how you compose and what comes to you play into this vision you had for EARS as a “future jungle”?

That was my intention when I started—I want to create the motion of running through a futuristic jungle. So that was the starting point, and then the sounds came from what the visual was that I wanted to create. So I actually did it the opposite ways of how I experienced sound when I was younger.

Rather than wait for visuals to come to you and then channel or interpret them, you thought about what you wanted beforehand and then made it manifest.

Yeah. And that kind of made it easy to figure out what the instrumentation was gonna be, what the sound palette was gonna be, and the feeling—do I want it to be airy, woody, metal. The album that I’m working on now is not that feeling at all. It has a lot more crunchy sounds and a lot more gear-oriented. Like watches, ticking.

The visual that I got when I was writing this new album was one giant, Frosted Shredded Wheat that someone’s breaking. So I kind of started going with that vibe for this album, and it’s evolving into many other things.

How do you stay open to an image evolving and trust that it’s going to coalesce into something cohesive, a singular work?

Well, I think it’s a collaboration of the subconscious, your intuition and guiding it with years of experience. Knowing that you can guide that creativity, and collaborate with it. 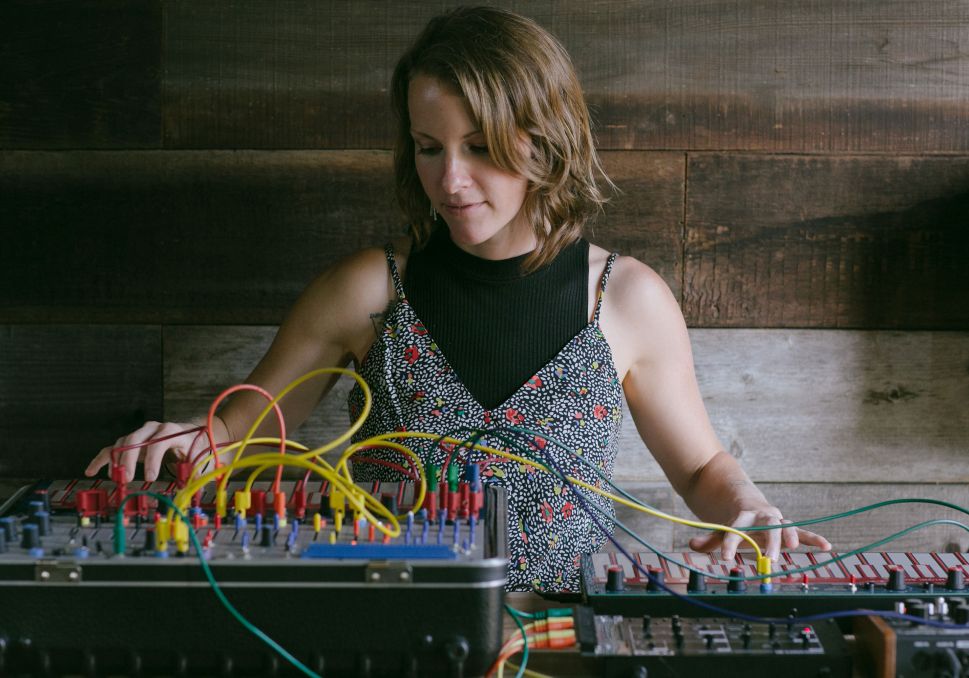