Welcome to our TV Fashion column, where TV Ate My Wardrobe‘s Emma Fraser discusses the trends in television apparel. This week: Halt and Catch Fire dresses up its gender politics.

Picking the right outfit for an important meeting whether over dinner or in an office is something that is easy to obsess over and it all gets even more complicated when factoring in the impression that certain garments or makeup choices might deliver; however wrong these assumptions are. This was something Donna and Cameron found out on Halt and Catch Fire last week as they began to navigate the San Francisco investment waters and come across numerous obstacles in expanding the Mutiny empire.

In an industry dominated by men having two women fronting a company does mean encountering some sexist douchebags who respond to great lipstick choices as a sign they are looking for a very specific kind of good time. Early on in this season’s second episode “One Way or Another” they discuss the lack of interest in their proposal; a proposal that “kicks ass” and doesn’t appear to have any obvious drawback, so they figure it must be their gender that is the issue. Boz is all glass half full suggesting it is a power thing while also conceding that them being women “probably doesn’t help matters.”

When they do get some interest from their original pitch and go to dinner things go in an unpleasant direction as these dudes just want to stiff them out of cash and get them plastered on champagne. Patronizing statements about how business is done out here and avoiding any kind of actual details about the investment figure is bad enough and yet what follows is even more rage inducing.

Cameron and Donna expect to be taken seriously (as they should), but Tim and Mac have read all the signs wrong. Signs that aren’t there and yet they choose to interpret as a come on. Apparently “Nobody wears that shade of lipstick unless they have come to play.” If by “play” Tim means feeling confident in a fantastic shade, then sure. But really these makeup opinions are not wanted and I kinda wish Cameron hadn’t dragged Donna off before she said something else. They are lucky not to be wearing their drinks to be honest. This dinner is an indecent proposal masquerading as an opportunity and you can guarantee these douche-bros think Donna and Cameron are overreacting.

The look of horror on their faces as the reality of this dinner dawns on them is heartbreaking, particularly when Tim lays out the reasons why the situation has been misread; their follow up calls and eagerness to go to dinner are seen in a whole different light by these guys because they are the worst. So now Donna and Cameron are hyper aware of their business attire and this is evident in the high neck collars and more natural lipstick choices for their next meeting.

After this disastrous dinner Donna has switched from a skirt suit to pants and Cameron has opted for a black ensemble that isn’t quite so oversized menswear; costume designer Kathryn Morrison does a fantastic job of indicating exactly how this incident has impacted Donna and Cameron through the clothes they wear. Their confidence has been hit and they are paranoid about giving the wrong impression and this is evident in their costuming.

People make snap judgments on how someone looks and a business meeting is no different; Donna wears the more traditional attire whereas Cameron has a whole androgynous style thing going on. At the proposition dinner, for example, Donna is wearing a variation of what she has worn to the pitch meeting – matching blazer/skirt and a nice blouse – whereas Cameron has switched out her patterned shirt and men’s suit for baggy pinafore dungarees and a black tee. If these guys were going to get an impression that they wanted to party then I wouldn’t say these outfits are screaming this notion. Not that wearing something low cut or tight would give Tim and Mac the right to place their pleasure ahead of business.

Gender politics of a different kind come into play in their next meeting as they are pitching not only to a woman, but someone Donna already knows. This doesn’t quite go as expected either, and Donna is quick to quip “So much for sisters doing it for themselves. She blames their rejection on recent personal dealings with Diane. Diane and Donna’s daughters got into a fight at school, but Halt and Catch Fire doesn’t go for the tired ‘parents who blame each other’ route making this rejection even more confusing.

Donna thinks it must either be because of their kids fighting or Diane’s partner Elias being a sexist jerk. Elias is a sexist jerk, but he cares more about making money than who is behind it and it has nothing to do with that fight. In fact it has everything to do with the proposal (unlike their first dinner meeting that had nothing to do with the proposal) and another company is working on a similar idea. Clothes and appearances don’t matter on this occasion so when Donna and Cameron go back with a solution they are both business casual; Cameron’s got her oversized jacket and Donna’s unbuttoned her blouse and they are confident as hell. And their new suggestion is a hit.

This isn’t to say there won’t be choppy sexist waters to navigate now they have their funding, but it does go to show that sometimes a good idea and hard work can lead to a success. Success that doesn’t require ambiguous and fear inducing marketing a la Joe MacMillan; he is now all about the villain status and the eyebrow raising white linen pants, which I’m kinda hoping will become his version of the Steve Jobs turtleneck. He certainly has the glasses and beard to match.

Assumptions fly all over the place when trying to second guess another person’s motivations and what we wear has an impact even when it has been misinterpreted like thinking a bold red lip means someone will sleep with you. What is interesting about how Halt and Catch Fire is exploring the tech industry and gender this season is that it isn’t just about sexist dudes like Tim, Mac and Elias. There is another woman in play who is already successful in this arena and who talks her mind. The Diane/Donna dynamic has already delivered from awkward (on Donna’s part) bathroom encounters and Donna seems both in awe and flustered by Diane’s confidence. How this will impact the overall setup as the season progresses is already filling me with much anticipation.

What is also clear is Halt and Catch Fire is another show currently set in the mid-1980s – see also The Americans and Stranger Things – that will be sure to influence what I am wearing in 2016. What I really want to know is the eternal question; What lipstick is she wearing? Because I would definitely wear that shade to an important meeting, for day drinks or a night of dancing. 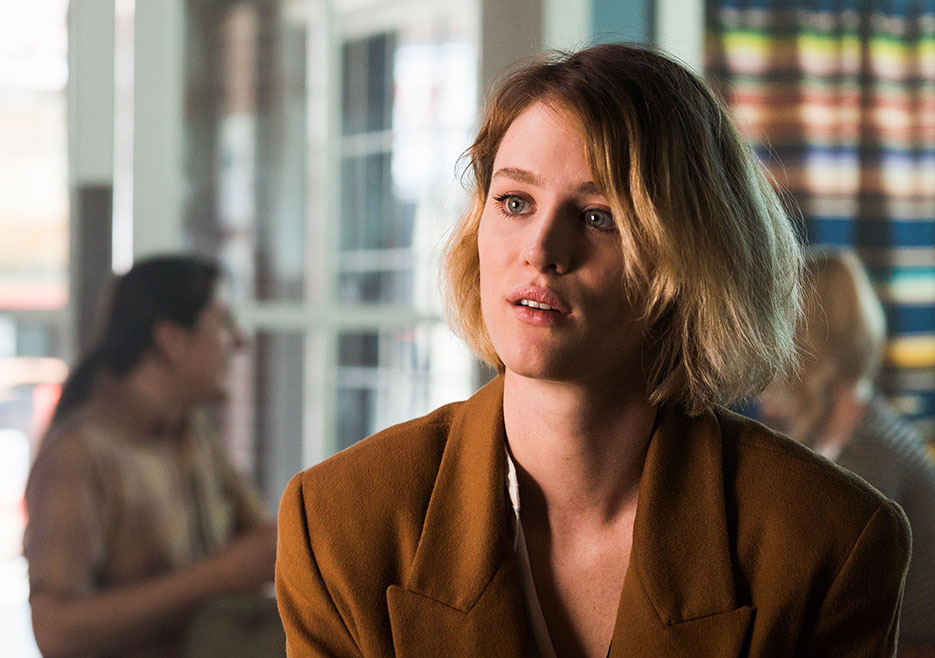