Liz Smith is calling. It’s mid-July, she’s supposed to be on vacation, she’s 93 years old and it’s 93 degrees outside.

Liz: “Honey, I can’t find Denis, and I’m trying to find out who the publicist is for The Front Page. It’s opening soon.”

Me: “Liz, I don’t think it’s opening until the fall. [The revival begins performances in September.]”

Liz: “That’s all right. Do you have the number?”

And that’s the way it is for Liz Smith, the Grande Dame of Gossip, the great powerhouse behind Literacy Partners and Living Landmarks, a fixture in New York society and the entertainment world since the ’70s when her daily column ran at different times in the Daily News, The New York Post and New York Newsday. She is planning her fall schedule.

The Denis she speaks of is Denis Ferrara, her trusty aide and specialist on topics like Madonna and Liza and Cher. Ferrara now—after a couple of decades—shares her byline on their daily column for NY Social Diary and the 20 or more newspapers across the country where they are still syndicated.

In early July, Liz, Denis and Mary Jo McDonough took a break from the daily grind so Liz could move for the first time in around 40 years—from her famous perch at a large apartment she called home East 38th Street and Third Avenue to a new, smaller one on Park Avenue and 63rd Street

This forced them also to leave Liz’s beloved watering hole and meeting place, El Rio Grande restaurant, which features a Tex side and a Mex side. Forever the longhorn, Liz’s table is on the Tex side, where she and often old pal Iris Love like the margaritas strong and tangy. I have regularly been drunk under the table by these ladies, only to see them stand without wobbling and scoot away in a matter of minutes.

I was summoned to El Rio Grande a few days before the move for one last rodeo. Liz swears she’ll return, but let’s face it—63rd Street is pretty far away even if you’re 63, forget about 93.

At 93, Liz, I am happy to report, is completely “all there.” People ask me, “How is she?” as if I will respond that she’s gone gaga. Far from it (although she gets a kick out of Lady Gaga). Being 93 and a grande dame is still hard work. Liz suffered a minor stroke last winter and recuperated at a friend’s apartment. She’s had falls, too, and uses an aluminum walker, reluctantly and only if admonished. She is truly unsinkable, though, a real combination of a sweet-as-pie, tough-talking Texan and an indefatigable New Yorker. Her honey blonde hair has finally gone to a soft gray, and her blue eyes are more incandescent than ever.

This summer has energized her as one of her favorite all time subjects has returned full force to the front burner: Donald Trump. Twenty-six years ago, Trump’s divorce from wife Ivana took Liz from Guilty Pleasure byline to Front Page Newsmaker. A photo of Liz and Ivana Trump at lunch in the middle of the storm over Marla Maples (mother of the lovely Wharton student Tiffany who spoke at the RNC two weeks ago) propelled them all into New York legend. It was bigger even than Liz’s long-time public feud with Frank Sinatra.

Looking around El Rio Grande, Liz lays out exactly where we are: “I think politics has become the new show business,” she says. She remembers when she called Donald in 1990 to inquire discreetly about rumors his marriage was falling apart. She wrote in her memoir Natural Blonde: “I liked the Trumps. They had three little kids, and I didn’t want to be the one to notify Ivana that her husband was playing around. It just wasn’t my style. I figured my warning shot would bring Donald to his senses. (Such fools we scriveners be.)”

The rest, as they say, is misery. Leaving the East 52nd eatery, Liz and Ivana were mobbed by paparazzi. They landed on the front page of the News. Stars were born.

Refilling her margarita, she reminisces: “Parker Ladd and Arnold Scaasi said, ‘You should go meet the Trumps.’ I said, ‘What are the Trumps?’ They said, ‘They’re very rich and aspiring to rise, and they will love you, and you will get a lot of money for charity.’ So he introduces me. Then I hang around with them for about a year. I liked her, but I couldn’t understand a word she ever said. I liked him because he reminded me of my brothers. I was amused by him. He would take me under the arm and introduce me to famous people. He’d say, ‘Isn’t she the greatest?’ He took me to prizefights and all this crap. I gave them their money’s worth, and I flew on their plane. I realized he thought he owned me. He didn’t own me. But everything for journalists is access.”

I ask, “Is this the Donald Trump we knew back then? What about when he calls Elizabeth Warren Pocahontas?”

Liz doesn’t miss a beat. “I would say yes. He [Trump] will do anything [to win]…He’s one of the great public actors of all time…He said he would buy the New York Daily News in order to fire me. It was the greatest thing. He made me world famous.” She is resolute that this is the man she knew all those years ago.

“I think we’re at fault in our innocence. We never saw anything like him. But he is exactly is like what he was. And his family was really nice. His mother, his father, his brother who vanished—Robert.” (Trump’s brother Robert, once married to Blaine and on the society pages every day, is AWOL from the campaign as is his sister, Judge Maryanne  Trump Barry.)
Denis: “You had no idea the day after Ivana’s lunch at Le Grenouille you’d be on the front page of the Daily News.”

Liz: “It was like The Day of the Locust.”

The Trumps are far behind in the window of Liz Smith’s long ride through celebrity. Over the years she “made” a number of people including 60 Minutes correspondent Mike Wallace (who she worked for in the 1950s), actresses Elaine Stritch and Holland Taylor, director Joel Schumacher and Barbara Walters. For a quarter century, everyone wanted “to be in Liz.” A mere mention traveled faster than anything on Twitter or Snapchat today. By the time you arrived for lunch at the Russian Tea Room, the Four Seasons or Trattoria dell’Arte, the buzz was loud. Liz Smith created celebrities.

For decades, Barbara Walters walked on in Liz Smith’s column. Then Liz lost her print outlet in The New York Post when Editor-in-Chief Col Allan (who inexplicably hated her) cut her from the paper in February 2009. Liz felt Barbara dropped her because her usefulness was over—even though Liz’s column was still online and still syndicated. Last spring Liz made some scathing remarks about Walters to a Hollywood trade writer.

“Barbara called me up after that, and she came over for dinner. That’s the last I’ve heard from her.”

With Liz out of the paper, it was lost on no one that Walters transferred her affections to the Post’s remaining gossip diva Cindy Adams, her new best friend. It may have been just as well. Adams is seen frequently assisting Walters at theater and other events since the 86-year-old former newscaster seems to have trouble walking.

So does Liz. But she says, “I feel great, I really do. I just can’t walk unassisted.”

Liz’s antipathy from Allan didn’t extend to other NewsCorp executives. Roger Ailes (now a pariah) was a steadfast friend who put Liz on his payroll and used her on TV as often as possible. Rupert Murdoch, though Allan’s boss, didn’t demand to keep her in the Post. But she ran into him last winter in Mustique when his romance with her old friend Jerry Hall was blossoming. They got along famously.

As for Cindy Adams, her forever rival, they are more frenemies than anything else. When Cindy’s late husband comic Joey Adams took a spill in public, Liz testified on his behalf. “I loved Joey,” she says, and she has deep admiration for Cindy’s perseverance.

But a lot of the Liz Smith world has changed. Stritch is gone; so is Arnold Scaasi who pushed her into Literacy Partners. “I raised $30 million for them over the years,” she says, which is true, and she poured herself into hosting and publicizing their events.

Her inner circle consists of Ferrara, as well as the irrepressible world-renowned archeologist Iris Love. To my observation, Smith—married twice to men, including one who just disappeared and had to be declared dead—and Love’s relationship transcends time and definition. They don’t live together. They squabble, purr and laugh. They are family.

“They asked me, ‘Where do you get your best tips?’ I said from other journalists, many from The New York Times. I said everyone who works there knows everything. They can’t print anything. Most of them are my friends. And Peter Jennings said, ‘We’re your friends!’ ”

The friendship with McFadden stuck and grew. How would she describe Cynthia? Liz says, “The most ethical person I know.”

Earlier in July, when the moving trucks were coming and the boxes were being assembled, the promise of a return to the daily grind seemed like it go either way. But on July 18, Liz and Denis roared back to life. The drum beats on with Ferrara working electronically from Hoboken and Smith operating her computer from uptown. Their sense of humor keeps them going. When the break was coming, Ferrara devised a snappy salutation in Liz’s name about leaving El Rio Grande: “No more of those delectable fresh tostadas or those gasoline-fueled margaritas. (If I were younger I might say that the latter deprivation is a good thing, but…I am NOT younger, and one only lives once, or so I am told. If this is not true, I’ll be sure to come back as—a margarita!)” 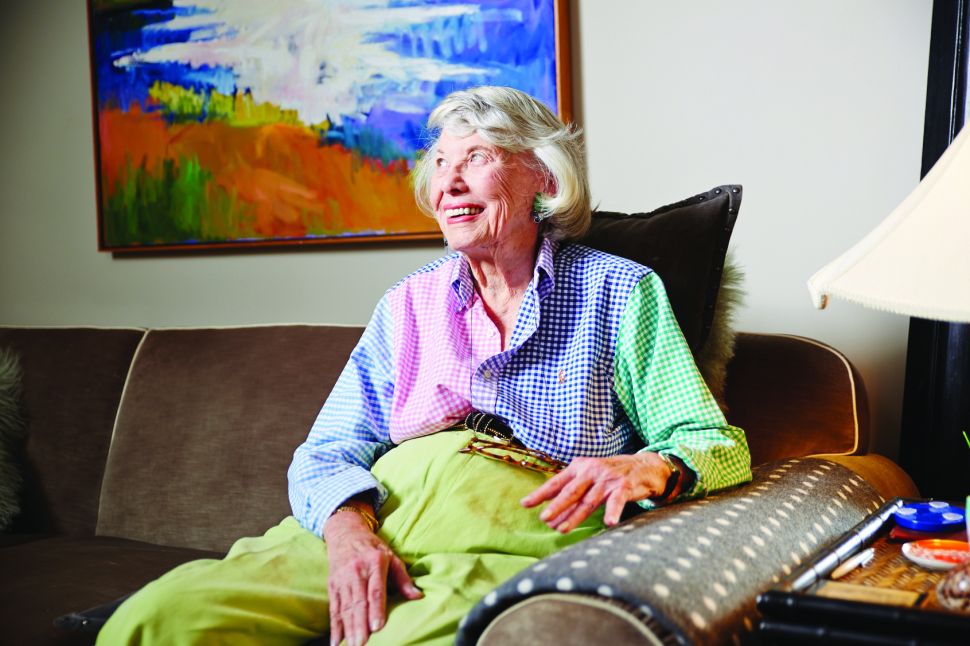