Mayor Bill de Blasio today called on Congress to authorize more than $100 million in anti-terrorism funding for the city through the Urban Areas Security Initiative—a plea that might make some New Yorkers feel a bit of deja vu.

De Blasio, along with Commissioner Bill Bratton, have been calling for the funding for months. There was a Feburary press conference with Senator Charles Schumer ripping the Obama Administration for proposing to slash the funding in half. There was de Blasio’s testimony on the funding to a Congressional subcommittee in Washington. There were countless other barbs tucked into press conferences about terror or federal funding along the way. The cuts seem to be averted—neither house of Congress is considering legislation that would actually enact those cuts, instead introducing bills that fully fund the program—but the money still has not been allocated.

“We constantly focus on this issue with a sense of urgency. What is missing at this time at the federal level is a reflection of that sense of urgency,” Bratton said today, noting that the bills are languishing while the presidential campaign is consumed by discussions of terror attacks. “How many conferences have I had with you, the media, talking about this issue? That we have to spend so much time asking that they do something, it’s frustrating. It’s frustrating.”

But while much of today’s press conference focused on Congress—just a day after de Blasio assailed Congress for failing to fund efforts to combat the Zika virus here—it was Obama, not Congress, that had considered cutting the funding. That discussion began in the Office of Management and Budget, which argued that New York had not been spending the anti-terror money it already had—which de Blasio today insisted was mere “spin” and Bratton called “smoke and mirrors.”

“They were cute,” Bratton said. “Very cute in terms of what they were alleging.”

Ironically, OMB is headed by a New Yorker: Shaun Donovan, who served in the Bloomberg administration before serving as head of Housing and Urban Development and then the budget office for Obama. Donovan’s named has been floated as a potential candidate to primary de Blasio in 2017. Asked whether the funding cuts ought to disqualify him, Bratton flipped the question back to the press.

“If I were you, that’s one of the first questions I’d ask him,” Bratton said.

While this fight began with the executive branch, Congress has historically not been exactly kind to New York City.

“This has been an ongoing problem now for years,” de Blasio said. “Remember the whole fight after Sandy to get the very same kind of aid that would be a no brainer in the past?”

Republican Congressman Daniel Donovan of Staten Island said he still encounters people in Washington DC who view the September 11 attacks on the World Trade Center as an attack on New York—and one they shouldn’t be footing the bill for. Congressman Steve Israel, a Democrat, agreed, saying these issues don’t always break down to a Republican versus Democratic divide.

“Very often it is New York versus much of the rest of the country,” Israel said. “I’ve heard on members-only elevators, ‘Why should we keep giving you guys money for homeland security?'” 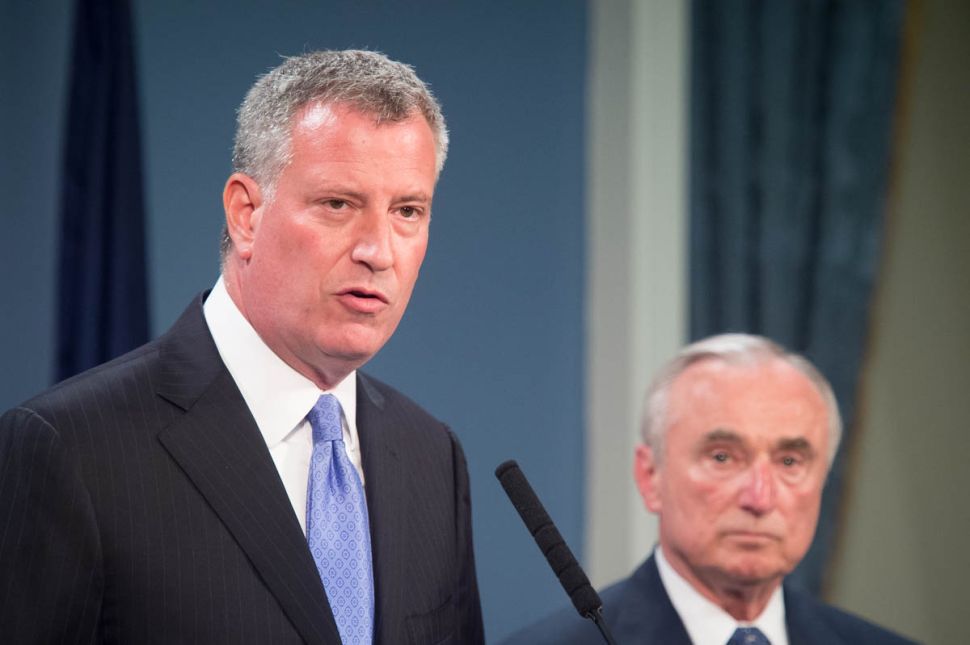