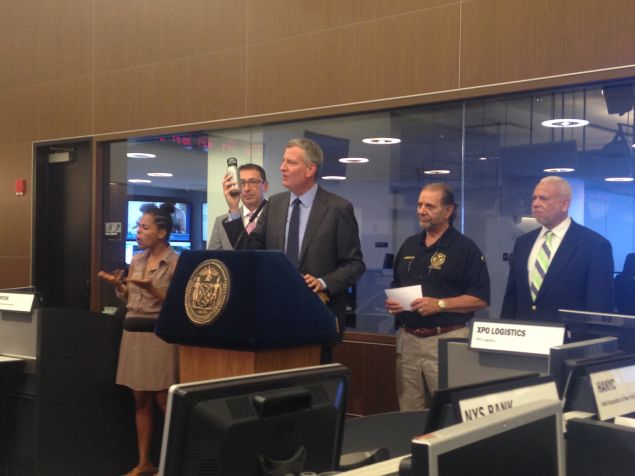 Mayor Bill de Blasio discusses the excessive heat that will hit the city this weekend. (Photo: Madina Toure for Observer)

As New Yorkers are bracing for a weekend heat wave with an expected heat index of 105 degrees, Mayor Bill de Blasio says the steamy weather isn’t “business as usual”—warning New Yorkers to avoid the heat as much as possible and to “drink lots of fluids.”

The National Weather Service issued a heat advisory through 8 a.m. Saturday. An excessive heat watch will go into effect from 8 a.m. Saturday through 10 p.m. Sunday. Heat index values on Saturday and Sunday will be about 105 degrees. So far, the city has not seen any heat-related deaths but has received around 59 heat-related calls.

The mayor is asking city residents to protect themselves and help others who may be at increased risk from the heat, liked seniors and those with chronic health issues.

“It’s been three years since we’ve had this kind of heat emergency. So again, we definitely had some hot weather earlier in the summer, but this one is different,” de Blasio said “This one is tougher, this one’s worse. So I want people to really take to heart, take precautions. This is not business as usual.”

He said the heat wave reminds him of Winter Storm Jonas in January. (The mayor’s warnings about a prior blizzard earned him his first write-up in the The Onion.)

The mayor himself said he is dealing with the heat in one simple way: staying hydrated.

“I’m going to give you my visual: drink lots of fluids. It is a typical problem of modern life: we just don’t hydrate ourselves enough,” he said, holding up his water bottle. “But then when you get into hot conditions, you’re losing water constantly and you don’t know it and then suddenly, you’re starting to feel dizzy or something like that. So this is the single smartest thing I think people can do and the one thing I try and focus on.”

City agencies have ramped up efforts to accommodate New Yorkers during the heat wave as well. The Department of Homeless Services has issued a code red alert and has enhanced outreach, the Fire Department has hydrant spray caps available for any adult 18 years or older at a firehouse upon request and the Department of Aging has opened senior centers as cooling centers.

Fire Commissioner Daniel Nigro and Emergency Management Commissioner Joseph Esposito were also in attendance, providing information about how their respective agencies were responding to the heat wave.

Esposito said that since the 2003 New York City blackout—the 13th anniversary of which is this Sunday—paralyzed residents and businesses, the city has stronger plans in place, noting that the emergency operation center “is a big part of how we would deal with something like that.” He also said ConEd has done “some tremendous work since then” and that “their system’s more reliable.”

Esposito also gave New Yorkers an excuse to skip the gym today—he urged against exercising in this weather. 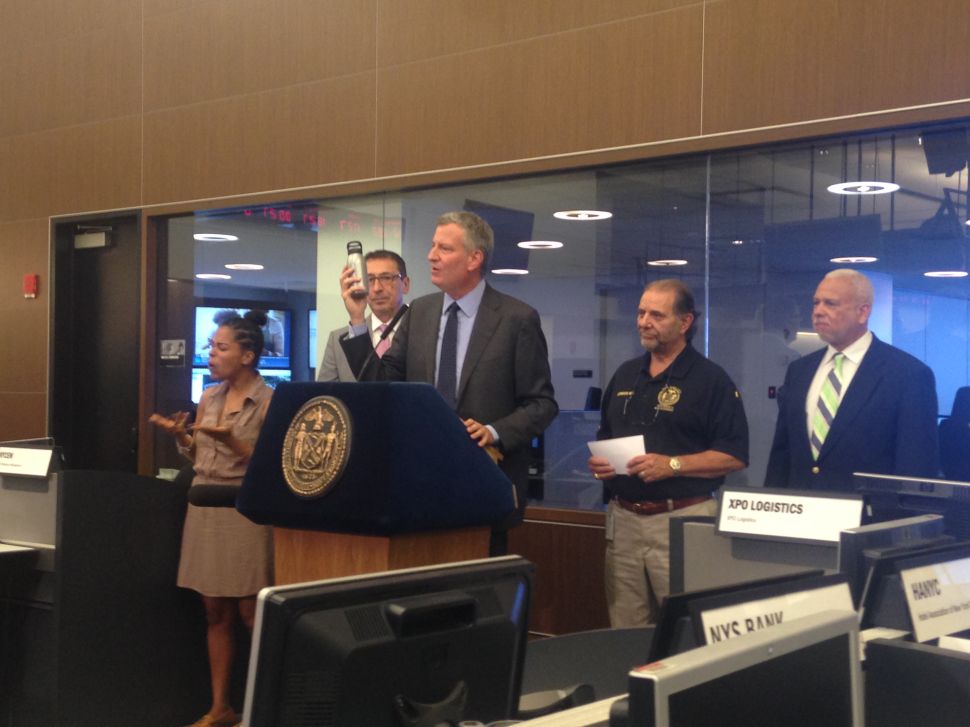