For 25 years, Arrow Films out of Hertfordshire in the United Kingdom has been one of the biggest and purest distributors of cult horror, sci-fi and exploitation films in the world.

And not only do they keep these lost treasures of Midnight Madness screenings and weird old video shops in circulation, they lovingly restore each film with the same sense of knowledge, care and attention to detail that Criterion does with their own collection.

Only instead of getting Jean Cocteau and Akria Kurosawa you’re seeing 2K restorations of seminal works from such original grindhouse icons as George A. Romero, Ray Harryhausen, Dario Argento and Roger Corman, loaded with extras and housed in beautiful, intricate packaging that pays keen attention to the amazing poster art gracing each cover.

In August of 2011, Arrow’s retail arm, Arrow Video, suffered a devastating losswhen much of its stock was destroyed in the Sony/PIAS warehouse fire during the England riots.

Five years later, however, they are back with a vengeance with a full harvest of new releases that really captures the full scope of this fantastic home video company and its resounding success in preserving the weird underbelly of cinema for a solid quarter century now.

Here are a few particularly essential titles to have come out on Arrow Video in 2016 thus far.

There are four versions of this flick that were shot between 1963 and 1966, which originally was financed by legendary filmmaker Roger Corman to be an Eastern European espionage thriller but somehow morphed into a horror movie about a vampire artist who hunts down models and creates sculptures with their dead bodies. Among the names attached to Blood Bath include Francis Ford Coppola, fresh off directing the Corman-produced thriller Dementia 13, and Jack Hill, a longtime Corman guy who would go on to helm such 70s exploitation classics as Coffy, Foxy Brown and The Switchblade Sisters, not to mention legendary television character actor Sid Haig, perhaps best known these days for his role as Captain Spaulding in Rob Zombie’s House of 1000 Corpses (though hardcore Star Wars heads might recognize him as Prisoner NCH from George Lucas’s directorial debut THX  1138.) This absolutely gorgeous box set dedicated to Blood Bath leaves no stone unturned in its intent to tell the entire tale of this most unusual evolution, including full versions of all four films that derived from the original Corman idea—Operation Titian, Portrait in Terror, Blood Bath and Track of the Vampire—reconstructed and restored for the very first time, along with a new documentary on the film’s legacy, the featurette Bathing In Blood With Sid Haig, and a beautifully put together book of liner notes that includes insight into the film, its convoluted history and its participants by such respected horror critics as Anthony Nield, Vic Pratt, Cullen Gallagher and Peter Beckman.

Pam Grier may have gotten her name starring in such racy Jack Hill flicks as Coffy and Foxy Brown, but in 1975 she came into her own as the true queen of black cinema in Sheba, Baby, the actresses’ sole collaboration with Blaxploitation director William Girdler. Though it was not the most popular Pam film because the PG rating prevented her from showing any skin, what Sheba lacked in nudity it more than made up for in total nonstop action buoyed by Grier’s whipsmart command of her character, a Chicago detective who returns to her hometown of Louisville, KY, to help her father and his partner (Assault On Precinct 13’s Austin Stoker) from losing their business to the local mob boss, brilliantly played by Dolemite director “D’Urville Martin. No involvement from Grier herself on Sheba’s Blu-ray debut, but amongst the scant bonus features here is an interesting documentary on her role as Blaxploitation’s leading lady called Pam Grier: The AIP Years. “The heat’s on in the street for that big bad mama, but she’s the one doing the cookin’,” boasts the voice in the film’s trailer, which is also included in this set. Man, that dude is not kidding.

“The father of all we do today in the business of science fiction, fantasy and adventure,” proclaims Steven Spielberg, just one of the many A-list auteurs who lent their time to be interviewed for this love letter to one of the true innovators of modern cinema. For children of the 60s, 70s and 80s, films like Jason and the Argonauts, Sinbad and The Eye of the Tiger and Clash of the Titans captured the imagination of children everywhere in ways only challenged by George Lucas and the Star Wars franchise. But even still, nobody was able to perfect the painstaking art of stop motion animation quite like Ray Harryhausen. His keen eye for detail helped bring such feared characters of Greek mythology like the Minotaur, Medusa, Pegasus, the Cyclops and, of course, the mighty Kraken to life with a sense of realism no computer animated graphic could ever properly replicate. And what filmmakers Gilles Penso and Alexadre Poncet may cut in terms of visual aesthetic during the filming of the interviews they more than make up for in the great insight they receive from Peter Jackson, Ray Bradbury, Terry Gilliam, Guillermo del Toro, James Cameron, Tim Burton, John Landis, John Lasseter and Joe Dante among many, many others who cite Harryhausen and his creature shop as the key ingredient to launching their own celluloid dreams.

I’ve been watching horror films since kindergarten, which has helped me build a pretty cast iron stomach for gore. But Larry Cohen’s The Stuff is definitely one of the few films in the genre that made me literally turn my head away in repulsion, even for a low-grade B flick. Let’s just say if you are planning to enjoy that jar of marshmallow Fluff you have tucked away in your pantry, I’d suggest not watching this movie beforehand. A funny factoid about this film, by the way: Much of it was shot up in Ulster County, NY, particularly my old college town of New Paltz. Actually, if you pause the movie at 1:26:31, you can catch a glimpse of the beginning of Main St., particularly Chez Joey, the pizza parlor on the corner where we used to go get slices drunk at 3 AM on a Thursday night.  Then the next scene takes place at the old Mohonk gatehouse known as the Smiley Testimonial Gateway, punctuated by Paul Sorvino’s Colonel Malcolm Grommett Spears perched atop its watchtower—an awesome sight for any local to behold. Among the extra stuff in this Arrow edition of The Stuff includes a new 52-minute-long documentary on the making of the film, as well as a really cool booklet containing expert liner notes written by Joel Harley.

Back in 1978, “Mankind was threatened by the greatest Red Menace of all: angry, merciless killer tomatoes!” So goes the plot of one of the weirdest and most beloved cult movies to ever play at a midnight screening. Return of the Killer Tomatoes is set approximately ten years later, as John Astin’s Professor Gangreen has figured out a way to transform the killer tomatoes into a human form, including clones of such era-appropriate personalities as Don Johnson and Michael Jackson. To be honest, it’s a really, really stupid movie. That is, however, until you get to the “Product Placement” scene of the film, perhaps the most ingenious breaking of the fourth wall Hollywood had experienced since Blazing Saddles, as if the reality of the cast and crew’s surroundings hit them like a ton of bricks in midshoot. But the one thing to consider with this film and its inclusion in this collection is that it features George Clooney, and not even in a starring role. He’s like second banana to the film’s leading man Anthony Starke. However, it’s pretty funny to go back and see him in this movie, and then challenge yourself to try and un-see his part in Return the next time you want to watch Syriana or Up In The Air. However, I will bet the farm that his role in From Dusk Till Dawn happened specifically because he was in Return of the Killer Tomatoes!, especially knowing Quentin Tarantino like we all have these last 25 years. I’m sure George has some pretty fun stories from the set of this most forgotten gem in his filmography. 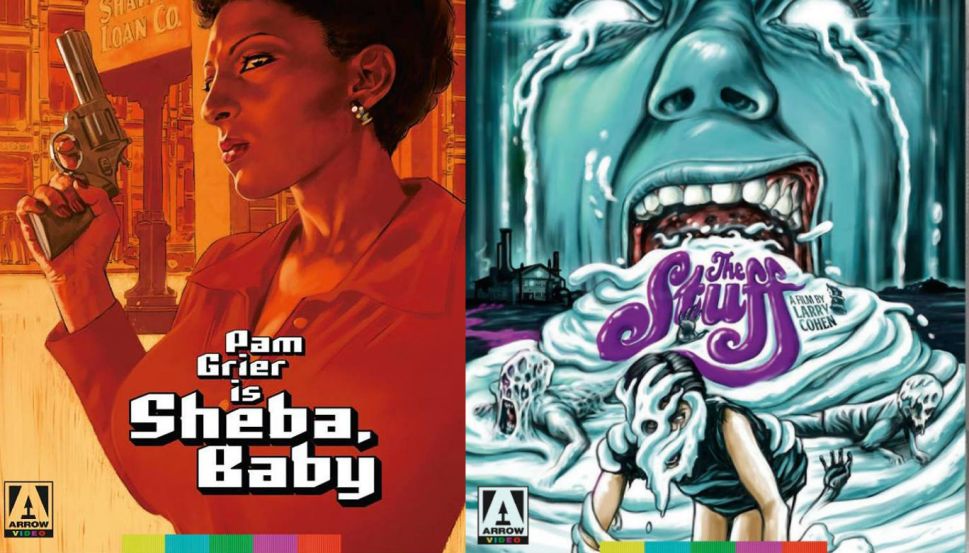