Critics are tasked with giving a deep and thoughtful listen to the music they review, but it doesn’t always happen. An album that wears its influences proudly often proves an easy place to stop for the writer who needs a terse, direct one-sentence subheading summation of what makes that recording special. That’s where the so-and-so meets so-and-so lines come from—Nelly meets Neu! or Miley Cyrus meets Klaus Nomi, et-cetera, et-cetera.

That’s what’s so refreshing about Alex Brettin’s Mild High Club and their new album, Skiptracing—labelers and experience tourists can stop at the easy descriptors, but delve deeper and you’ll be richly rewarded.

Brettin’s made no secret of his Steely Dan affectations on the record, nor his time spent touring with the hopeless romantic schmaltzmeister general, Mac Demarco, or good friendship with bedroom-pop oddity Ariel Pink. And all of these names are valid entry points into Skiptracing, with its woozy ’70s L.A. waltzes and smooth, groovy loungey moments. But digest the whole thing at once and subtleties start to emerge. “Head Out”and “Kokopeli”, in particular, elevate the vibe into a comely bossanova, as Brettin croons over the latter, “Welcome to my twisted gallery, where music touches me, choosing to keep shuffling because tuneage beats suffering.”

“I’m not about making music that you can do your hair to.”

Skiptracing makes sense when understood as a gallery, a room where Brettin’s jazz education and love of different West Coast sounds mingle while on display and eventually coalesce into a loose narrative.

That narrative finds Brettin as a sonic detective in his own noir, rooting through sounds and homages to ask himself how he got to L.A. and how his musical history informs his present work. It’s a move where the detective’s greatest investigation involves a long, hard look at himself. (The press release reads, “Skiptracing is Philip Marlowe driving around L.A. listening to Caetano Veloso or that deleted scene in John Cassavetes’s The Killing of a Chinese Bookie where Cosmo Vitelli reads Cosmic Trigger.”)

So while the shadow of those archetypal venetian blinds that frame the detective’s office in any classic noir are visible on Skiptracing‘s cover, they’re purple and disproportionately large, the shadow that they cast cutting through the whole room. My chat with Brettin revealed him to see value in such abstractions, and to feel comfortable asking questions with a detective’s restlessness—why doesn’t today’s pop music ever seem to warrant a deeper listen, why don’t albums explore themes and narrative anymore, and if these characteristics have, in fact, disappeared, then whodunnit?

I’ve been listening to Stone’s Throw Records since I was a kid so I thought maybe we could start with them, and their imprint Circle Star, whom you linked up with when you first tripped out to LA. Was it by chance that you ran into those dudes or was it planned?

Um, it was somewhat by chance. I had some friends that were doing another record there and I came out. So yeah, it just took off from there. I met everybody at that office.

Were they already planning this non-hip-hop imprint (Circle Star) and it was just kind of serendipitous, or were you the spark?

Well they started up years ago with a Dam-Funk record, and I guess I kinda pressured them into starting it up for the sake of my own sort of hang-ups with, I guess, joining the main label’s catalog. I sort of wanted something else.

But you obviously knew they had a lot of clout for wanting to be in that canon at all, right? And your new record’s not on the imprint, it’s just on Stone’s Throw.

Yeah, it’s on the proper label.

Was that a decision based on the fuller production, or you evolving as an artist? Was it a business decision?

I just felt it was more worthy of standing on the same bookcase as Donuts and shit like that, you know. Maybe not the same shelf.

And also as an L.A. album, I mean, Stone’s Throw is synonymous with L.A., and L.A. has so many different scenes and sounds and neighborhoods. When I was reading about this record and you said that the narrative in this story is akin to a detective investigating or tracing American sounds, it all fit. The songs bleed together, which always implies that there’s an arc or a trajectory. Is that where the love of AM radio pop comes in?

Yeah, I think the AM radio pop thing is a pretty…it’s a good way to describe some of it, but for me a lot of it just comes down to being obsessed with finding new music that excited me and keeps me coming back because I can’t immediately figure it out.

So you’re the investigator really, working through it all?

Basically, yeah. A joke of an investigator, though. I’m not crazy academic, you know, the equivalent of an officer of the law. If anything, I’m looking to bend it and trying to work around it. But yeah, it’s a little bit of an L.A. journey into where I’ve come from musically and what I’ve come to enjoy and what I care to learn and decipher.

Your jazz upbringing is very interesting to me, I mean, a lot of jazz players kind of go out and make music that’s studied. But you don’t wave it around on your record, your training—it’s more of a compositional tool for transitioning between themes quickly, maybe? Do you think this record is an extension of that more than the first one?

Yeah, definitely. I think the first one I wasn’t quite ready to use the concepts that I had picked up in school. Even at this point I’m still trying to wrap my head around some of the moves I made. With the first record I was still leaning left of the jazz thing, more on The Beatles and emotive sort of feelings, in retrospect I was a bit blind to the tropes and musical idioms, so to speak. Doing this record was sort of a commentary of sorts on that, what it even means to make a song or recording in 2015-2016.

This is still for you at the end of the day, though.

Yeah, and when it comes down to it, when I’m making this stuff there’s never a moment where I’m like, “O.K., this is the hook that everybody likes.” For me this record was sort of just like going into the weird zones and fantasy realms of the music and films and books I was consuming at the time.

It’s like a fever dream. I thought of Season 2 of True Detective, not the quality of the story telling per se, but more the noir vibe set against California now, with the investigator descending on the scene of commune culture and the high vibe people. Even Inherent Vice.

Noir is such a stigmatized genre, and it wants to be—that’s where it gets all of its daring and sexiness. But then you have these Beach Boys vibes, I hear some Olivia Tremor Control in there. They’re interesting to me because psych-pop is such a simple label but there’s so much more random shit going on in there.

Yeah, it’s the same principle as having to label anything in general. At a certain point there’s only so many things you can say to describe it. Hopefully people don’t just put an umbrella over what I’ve made. I tried to go everywhere from bossanova to baroque to Beach Boys to blue-eyed soul to jazz.

I hear it all. It’s almost counterintuitive to how the music business works, which is funny.

I’m here to stick it to the man! Hehe.

We want to encourage everyone to get creatively heady, but then the gears turn off of a system that thrives on press releases and codifying everything. I hear this as a statement about that, too.

I’m just trying to get people to pick up on some themes and pull something out of the music that’s not just, “you didn’t call me on my cell phone” or something. Not to diss Drake.

Oh don’t get me started. I wrote a piece about how there’s no substantive journalistic work or heady reads on him last week and I’m already getting hate mail.

Well, not to diss Drake, I like his music. But in general, there seems to be a cloud over pop music. It’s very cloudy, and ironically it’s being shrouded in these minimalist productions that sound really huge. I guess it’s radio.

It’s trying to sound more avant-garde and underground by pulling back and sounding more sparse, but you can still hear the money on it.

I guess a lot of the themes are just not so fantastical or something. Maybe they are deep in the relationship sense, or how they comment on real world problems people have? But to be honest, I don’t need to write a song about that anymore. I guess I tried on the first record by writing about Facebook and all that shit, but that didn’t actually get through to a lot of people.

That’s whats funny about the title track, I mean here’s a record that’s not easy listening but—

Oh, it’s a difficult listen for sure.

Yeah, your lyrics aren’t as easy as your music in a lot of ways.

I agree, and I hope it’s a challenge for people to listen to, not just something you put on in the background. I’m not about making music that you can do your hair to.

Yeah! I just want you to sit alone and listen to it.

[Laughs] I’m not trying to solicit anything, but I’ll just say that it’s cheeky. It’s a little wittier than the previous thing. It’s my second record, I’m coming back around. I’m following what seems to be footsteps of the past [that] are also my own. Just the good stuff from a timeless sort of fantasy. 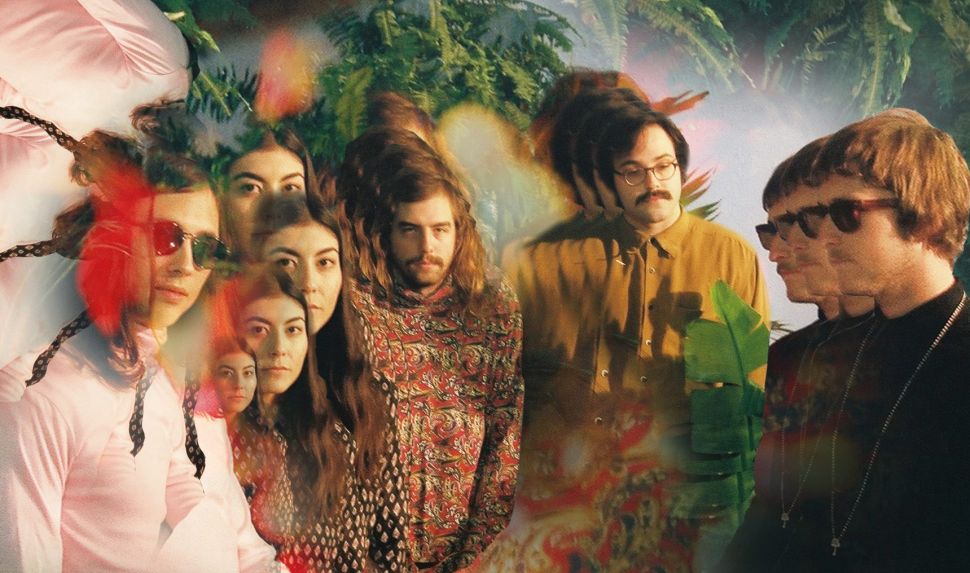