Benjamin Millepied, back from his unhappy stint at the Paris Opéra Ballet (some of us gave it three years; it lasted less than two), recently brought his L.A. Dance Project to the Joyce, nine dancers strong. A small company is appropriate for Millepied’s own choreography, since large group work is not his strong point, and his On the Other Side, which closed the program, was a favorable omen for his future. Not that it had much to tell us, except that communities are good things, but it does make group sense.

We’ve already seen his rip-off of Jerome Robbins’s Dances at a Gathering—five couples, Chopin piano music, etc.—in something called Without that the Mariinsky brought us a year or so ago. On the Other Side, his new version of the dancer-community ballet, is far more pleasing—all nine of the Joyce company are seen in flowing movement that features individual dancers as they emerge from and recede back into the gang. They’re concerned with each other, they support each other, they’re connected. Robbins, of course, was doing this kind of thing as far back as Interplay (1945).

Among the pluses: loose, pretty costumes by Alessandro Sartori and a thrilling solo by Laura Bachman of the Paris Opéra that’s open and cheerful and goes all-out. Among the minuses: a piano suite by Philip Glass that thumps on and on and doesn’t get anywhere. All in all, though, this was the first of the dozen or more Millepied ballets I’ve seen that I can imagine seeing a second time.

The opening piece was called Harbor Me (where do they come up with these names?) by Sidi Larbi Cherkaoui, who’s a big deal on the European dance scene at Sadler’s Wells in London and as the artistic director of the Royal Ballet of Flanders—in other words, he’s Euro-trendy. Here, to the throbbing and derivative music of Park Woojae Geomungo, three men (or rather three torsos) convolute in a way that’s interesting at first but ceases to be interesting when it, too, goes on and on…and on.

The obligatory Justin Peck contribution was Helix, new to New York though choreographed a couple of years ago. Three couples—male/female, so old-fashioned—get it on as Esa-Pekka Salonen’s score swells and swells, the way movie scores used to swell in the old days. Peck is always both inventive and scrupulous, and he makes all dancers look good (although the L.A. dancers look good for everybody). There are some witty freeze frames, lots of soaring lifts through horizontal space, and the piece grows more excitable, if not more exciting, as the music does. Helix is a respectable addition to the Peck oeuvre, but not central to it.

The most unlikely event on the program was a group of three Martha Graham duets, originally assembled for her 1957 film documentary, A Dancer’s World. If you know her famous work Diversion of Angels—the most balletic of her major pieces—you recognize the “White” duet, but only by the steps themselves. The gallant L.A. Dance Project dancers performed Graham clearly, cleanly, but somewhat antiseptically: They look more like Cunningham dancers than Graham ones. This was a splendid idea and a welcome tribute, but it’s not what Graham looked like back in the late fifties and early sixties.

It would be hard to come upon a project more different from the L.A. Dance one than the National Ballet of Canada’s The Winter’s Tale, Christopher Wheeldon’s latest entry in the full-evening narrative spectacle sweepstakes. Poor Wheeldon, stuck with dreary old Shakespeare! He tells us in the program that he’d seen the play once and been “bored out of his mind” before his pal Nick Hytner (ex-head of Britain’s National Theatre) suggested it might work as a ballet. After encountering several other productions, he thought, “Why not?,”even though, according to Nick, the play wasn’t really well-constructed and the writing was “fairly jumbled.” Why is it that choreographers can’t open their mouths without putting their feet in them?

Wheeldon tells the tale in three acts. Or, rather, in one—the first. Here he’s at his best, getting briskly through the horrible story of King Leontes’ insane and baseless jealousy of his childhood friend and fellow monarch, Polixenes, whom he’s convinced has cuckolded him with his loyal and noble wife, Hermione. His new-born daughter is sent off to her presumed death, his son Mamilius dies of chagrin and grief, and Hermione is found guilty of adultery and dies as well, leaving Leontes in his kingdom of Sicilia, alone with his anguish and the endlessly hectoring voice of Paulina, Hermione’s closest companion.

All this, as I say, is ingeniously telescoped into decipherable narrative. The actual dancing, though, is thin, repetitive, unconvincing—nothing but arabesques and lifts, plus some ugly and obvious tics for Leontes. How clearly Wheeldon fails to grasp the nature of his source is underlined when he has the dignified and virtuous (and pregnant) Hermione flings her legs wide apart for our delectation in several supported lifts. Did Wheeldon bother to read the  sublime “jumbled” poetry Shakespeare bestowed on her?

The ballet goes badly wrong in Act II, many years later, when Perdita, the baby who had been washed up on the “Coast of Bohemia” (Polixenes’ kingdom), is now a radiant young woman living with her rustic saviors and in love with a young man who is actually Polixenes’ son, Florizel, in disguise. We now get acres of happy, happy peasant dances, everyone in ethnic garb and more or less infected by ethnic steps—Jody Talbot’s uninteresting music begins to suggest we’re heading for Never on Sunday.

This vamping goes on seemingly forever because there’s no story to tell here, until Polixenes, disguised in some kind of burnoose, interrupts the happy rustics in a rage because the Prince is canoodling with a mere country wench, however pretty and elegant and virginal she may appear. The steps of the lovers are again all arabesques and swoony lifts.

The kids flee to Sicilia where they are warmly welcomed by Leontes, and in the final brief act everyone is reconciled, Hermione having been miraculously saved and stashed away all this time by Paulina, and now reappearing as a statue coming to life in one of Shakespeare’s most moving scenes. In the play this happens before the full court; here it’s stage-managed by Paulina for Leontes alone, so that he and his all-forgiving wife can give us yet again, in private, those arabesques and lifts. There’s no hint of the larger reconciliations suggested by Shakespeare.

Christopher Wheeldon was a promising choreographer. Now he’s a stager of spectacles, and indeed by far the best things in this Winter’s Tale are the special effects—the projected film of ships and storms, the amazing look of Basil Twist’s work with a vast silken curtain, the huge elaborate tree concocted by the designer Bob Crowley. This wouldn’t matter very much if Wheeldon’s stagings were as brilliant as Jerry Robbins’s were when he abandoned ballet for Broadway (West Side Story, Fiddler, et al.), but though they’re flashily efficient, they’re second-level. Wheeldon’s Alice in Wonderland was a travesty; his American in Paris an uninteresting hit.

Well, why shouldn’t he have the career he prefers? And look! He’s been awarded the OBE! Too bad for those of us left behind with our unreasonable belief in ballet. Robbins made a spectacular comeback with Dances at a Gathering, but given the increasingly dutiful choreography Wheeldon has been coming up with, I have no such hope for him. 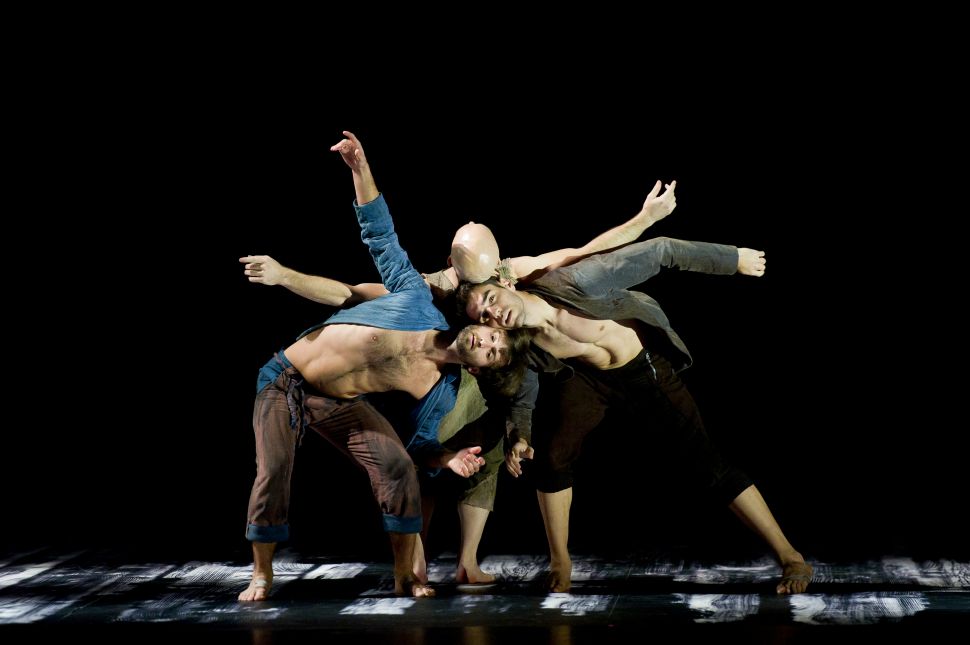