Our theater community took a major hit this month with the passing of James Houghton, the 57-year-old artistic director of the Signature Theater Company who pioneered a whole new procedure in the presentation of plays. It was his bright idea to devote a whole theatrical season to a single playwright, offering up what he called “the misfits as well as the hits” and any new work the author may want to get off his chest and onto the stage. That was 25 years ago, and the concept has outlived him.Innovators listen to their own drummer and stay that course until others hear it as well. They’re in short supply in theater, but they’re there.

Consider the case of Jonathan Bank, the 56-year-old producing artistic director of the Mint Theater Company. He is not to be confused with Jonathan Banks, nor would he be by anybody but Wikipedia in this day and age. Jonathan the Singular is a cerebral, soft-spoken chap on a constant quest for the overlooked play, regardless of its vintage or country of origin. Jonathan the Plural plays the bald badass on Breaking Bad and Better Call Saul, and he likes to let his gun do most of the talking.

Both the Mint and the Signature have been in operation roughly the same quarter century, but the Mint really became the Mint when Bank took over in 1996 and gave it focus, drive and direction. “We scour,” according to the bylaws, “the dramaturgical dustbin for worthwhile plays from the past that have been lost or neglected—and we create new life for them through production, publication and educational initiatives.”

Houghton, says Bank, “was an inspiration to me. In my early days, I could look up and see that having a niche was doing him no harm at all. I could see that having a clear purpose is good. No matter how tiny it is, if it’s worthwhile and it’s clear and you’re focused and you’re disciplined about sticking to it, you shouldn’t be afraid of it. So many artistic directors nowadays are trying to create flexibility for themselves.

“Jim really helped me see that, in New York, figuring out what you want to do and being able to articulate it clearly and simply is the proper path to take. He was wonderfully successful at what he did while always being true to his own values.”

When Bank took command of the company, he briefly considered a name change. “One of the first things I did was look up the word ‘mint’ in the Oxford English Dictionary, and there were two pages of various different meanings. One of them was ‘to aim at, or to aspire to.’ The example given was ‘Those that mint at a gown of gold will surely get a sleeve of it.’ I thought, ‘Well, all right, I can live with that.’ ”

But gold is where you find it, and Bank has been a perpetual prospector panning for it ever since. He especially likes to raid the list of once-popular but unrevived Broadway long-runs that kept theatergoers comfortably entertained back when.

Rachel Crothers’ Susan and God with Gertrude Lawrence put in 288 performances on the Main Stem, S.N. Behrman’s No Time for Comedy with Katharine Cornell and Laurence Olivier 185, Rose Franken’s Soldier’s Wife 253, John Galsworthy’s The Skin Game 176. These weren’t box-office slouches: They were popular fare that faded into the silent stacks of the library, never to be disturbed again—except maybe by Bank.

In 1999, when City Center did five Encores! of Do Re Mi, a lesser but still delightful Comden & Green work, the authors showed up on closing night to thank the artists who had done it. “Adolph [Green] and I never thought we would see this show again,” said Betty Comden, gesturing to the left, “and here it is,” then to the right, “and there it was.”

Another Mint option is the gem from the U.K. that never quite got across the pond and only now is making a very tardy U.S. debut. A case in point was Harley Granville-Barker’s big London hit of 1905, The Voysey Inheritance, which became—much to Bank’s amazement—the Mint’s first major success: “I thought it would be the end of the Mint: Nobody knows the author, the title is meaningless, and it has a cast of 11.”

Somehow, this all added up to a runaway hit. “We couldn’t extend the run in June of 1999, so we brought it back in January. It was going to do five weeks, but it did 10. I knew we had something when there was a huge snowstorm and nobody canceled.”

Then there’s that rare play written by somebody you never suspected wrote plays—to name names: Ernest Hemingway and his third wife, Martha Gellhorn (there’s a depiction of him in her Love Goes to Press and of her in his The Fifth Column), Leo Tolstoy (The Power of Darkness), J.M. Barrie (Quality Street), D.H. Lawrence (The Daughter-in-Law) and Thomas Wolfe (Welcome to Our City). “There was a time when everybody wanted to write a play. It seemed there was more money to be made—and more celebrity to be had—in having a hit play than in having a best seller.”

So what branch of academia is Bank from? No branch, not even a twig. “I play an academic on television,” he teases. “But, in reality, I’m not one. It’s true I’ve carved kind of a scholarly niche for myself, but I’m not from academia. I’m from Cleveland.”

It’s his passion for theater—particularly, for keeping in touch with theater’s past—that drives him farther into the stacks. “I want to do old-fashioned plays that people never heard of. I’m extremely interested in the structure of the well-made play and why they’ve become neglected. After I did a few of them, that in itself fascinated me—the number of plays that are worth producing that, somehow, never are.

“I felt for a long time that I could safely say the audience doesn’t care what our mission is—they just like a good play. The people who come to see their first play come back because they like the play they saw before, not because they think the idea behind the company is important or interesting. Now, so many years later, I think we’ve done a good enough job—and the press has done a good job of telling that neglected-play story—that our audiences are finally tuning into all of that.”

From a window in the Mint’s 12th-floor conference room in “the old McGraw-Hill building,” Bank can look down on the big red-brick building on West 43rd that housed his 99-seat theater for 20 years. Last fall, it became a casualty of a Midtown real estate boom, and the bum’s rush was so sudden and unsentimental that the Mint began its 2016-2017 season in a rented space in the basement of City Center.

But even then, the company wasn’t just bobbing about in a sea of uncertainty and change. Bank had secured a safe harbor—a permanent residence—at the Beckett Theater in the Theater Row complex on West 42nd Street. Now previewing there for an August 25 opening, under Austin Pendleton’s direction, is the first New York revival of N.C. Hunter’s A Day by the Sea. It bowed at London’s Haymarket in 1953 with theatrical royalty—three Sirs and a Dame: John Gielgud, Ralph Richardson, Lewis Cason and Sybil Thorndike—and ran 386 performances. This reprise is peopled with untitled worthies like Jill Tanner, George Morfogen and Philip Goodwin.

“My attraction to A Day by the Sea was really the quality of the writing,” he says. “It’s just so fine. The language is beautiful, the sentiments are human, the issues it touches on are timeless. The central crux of the play is about a 40-year-old man who has come to a kind of crossroads and wonders if it’s too late to fix the mistakes of the past and too late to change the course of the future. Is it, or isn’t it, too late?”

N.C. Hunter entered Bank’s consciousness in a typically circuitous fashion. While researching Mary Broome, an Allan Monkhouse comedy the Mint did in 2012, he came across a review of A Day by the Sea that referred to Hunter as “the English Chekhov.” This was tantamount to waving a red flag at Bank. “I got copies of everything I could of his. Our first Hunter was The Picture of Autumn three years ago.” Earlier this week, he did a reading of Hunter’s best-known work, Waters of the Moon, and he plans to do a full production of Hunter’s The Tulip Tree in a few years.

“Our readings are never tryouts,” Bank says. “I just like to enlarge our audience’s view of an author. There are readings of plays I like enough to do readings of but not productions. It has happened occasionally that a reading goes so well that I’ll decide, ‘Oh, wow, I guess I will do a production of that.’ The Fatal Weakness was like that.”

The Fatal Weakness is a forgotten charmer of 1946 by George Kelly, uncle of Monaco’s Princess Grace. His Pulitzer Prize winner, Craig’s Wife, has yet to be presented by Mint but, I promise you, will be. Bank is partial to Pulitzer Prize winners and has dusted off for re-presentation Zona Gale’s 1921 Miss Lulu Bett and Susan Gaspell’s 1931 Alison’s House. He’s also, you’ll note, partial to female writers.

His passion doesn’t always stop with the production. Bank has published in his Reclaimed series collections of works by playwrights he has presented—specifically, Teresa Deevy, St. John Hankin, Arthur Schnitzler and Harley Granville-Barker.

Very little tinkering is done with these aged texts, he stresses. “For A Day by the Sea, we cut nothing, but for the Harold Chapin [The New Morality], the last play we did on West 43rd, I cut a few things, and then I put everything back in. I was wrong.

“There’s a cut I want to do on the play we’re doing in January—Miles Malleson’s Yours, Unfaithfully—because it doesn’t ring true. I’m perfectly willing to fumigate if needed. I think people may think we’re scrupulously reverential, but that’s not the case. Generally speaking, these plays need a lot less help than you might imagine.” 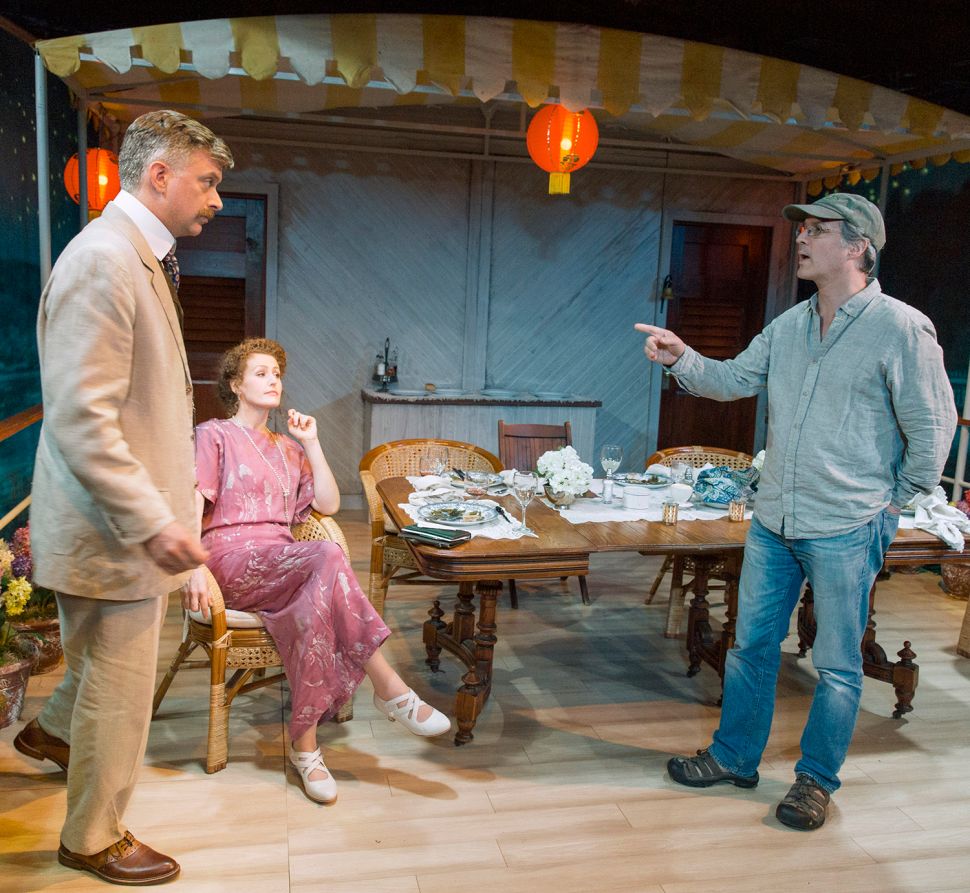