At the beginning of Morning Joe at 6 a.m. Thursday, anchor Mika Brzezinski asked her MSNBC audience in a raspy voice “How do I sound?”

Later, explaining the absence of co-anchor Joe Scarborough, Brzezinski said “Joe has the morning off and so does my voice.”

For sure, her voice sounded hoarse and scratchy. But there was plenty to talk about and her words and thinking were clear.

Her starting point was the “intervention” proposed by Newt Gingrich and Rudy Giuliani, high-profile Republican leaders who, it is reported, hope to approach Trump through his children to make suggestions about saving his stumbling and scattered campaign against the Democrat, Hillary Clinton.

“An intervention won’t help,” Brzezinski said. “We’ve kind of seen who he is . . . how he would lead.” Later, she called it “an intervention that says ‘Please, drop out of the race.’”

She disputed the idea that dissatisfied people should support Trump because he is different than a typical politician.

Speaking to the camera, she implored Republican Congressional leaders like Paul Ryan in the House of Representatives and Mitch McConnell in the Senate to renounce their continuing support of Trump, whose campaign is, at least in part, anti-Muslim and anti-immigrant.

She referred to Trump’s recent involvement with veterans and their families. It includes accepting a Purple Heart from a man at a campaign rally and verbally feuding with the immigrant parents of a Muslim-American soldier killed in Iraq and who was posthumously awarded the Bronze Star and the Purple Heart.

But that feud is being obscured by new issues. In view of startlingly low poll numbers, Trump now says he sees a conspiracy to “rig” the election against him. He also says he saw a video of American government money delivered by airplane to Iran—a video nobody else can find.

It’s sort of like the video only Trump saw of Muslims in New Jersey celebrating the terrorism of 9-11. Stuff like that didn’t seem to hurt him in the primaries.

But since his feud with the Khan family began last week when they denounced his policies at the Democratic convention, Republican officials and donors are starting to speak out against him and abandoning his candidacy.

So Brzezinski used a new metaphor for Republican politicians on the “Trump Train.” She compared his campaign to an automobile that has burst into flames.

“My choice is go get out of that car,” she said. “But I guess people like driving cars that are on fire that can drive our country into the ground.”

It was an appropriate and timely metaphor for Trump, who will speak Monday to the Detroit Economic Club.

It will be curious to see if he renews his threat of heavy tariffs on cars built by Ford in Mexico. This is not the sort of audience that will chant “Build that Wall!” about Mexico or “Lock her up!“ about Clinton.

Brzezinski’s point of view was buttressed with a sound bite from Gingrich, the former Republican Speaker of the House; and with live words from Michael Steele, former chair of the Republican National Committee.

“He has got to find a way to slow down and really learn some new lessons,” Gingrich said of the rookie politician. “It’s a little bit like ‘The Apprentice’ except that he’s the apprentice. He’s not the boss.”

Steele, asked by Willie Geist what he would tell Trump, replied: “Do you want to be president? And, if the answer is ‘Yes,’ then you damn sure need to start acting like it . . . you’re losing this election . . . you’re giving it away.”

Steele and others on camera tried to persuade Brzezinski of the dilemma faced by Republicans running for offices down the ticket. If they run in districts or states partial to Trump, it could be dangerous to their re-election to denounce him.

“I know it may make your head spin,” Steele said, “but that’s the reality.”

“You think that running after Donald Trump like a lemming is going to make people love them more?” she asked Steele. “How about finally, finally being leaders of principle?”

And there was more.

BRZEZINSKI: “Has he demonstrated that he knows anything about foreign policy? Yes or no?”

BRZEZINSKI: “Would he really make us safer? Yes or no?”

STEELE: “I don’t know what that means.”

BRZEZINSKI: “Is he a Republican?”

On screen, Morning Joe showed a headline from The Chicago Tribune that said “GOP ‘Sense of Panic’ Rises over Trump.”

Another full-screen quote was from Ross Douhat, a columnist for The New York Times.

“There is no reason to believe that Trump’s conduct will get anything but crazier,” he wrote. “Ryan is supporting a man that he obviously knows . . . to be dangerous, unstable, unprincipled and unfit.”

Brzezinski wondered about Trump’s loyal supporters, who will vote for him no matter what he says or does or who he offends.

“I worry,” Brzezinski said, “that they don’t understand they’re being scammed by someone who’s really good at it.”

Unlike Scarborough, Brzezinski plays her role like a point guard in basketball, passing the rock around to make others look good. Scarborough, by contrast, is like a power forward who demands everyone give him the ball under the basket.

Brzezinski brought in Katty Kay of the BBC and let her speak.

“I wouldn’t be surprised if, after Labor Day, you had a slew on the Republican side saying ‘We just can’t vote for Donald Trump,’’’ Kay said.

Also speaking on the subject of an “intervention” with Citizen Trump was Hallie Jackson, a reporter who covers the campaign for NBC. She said Republicans would try to tell Trump to moderate his tone.

Brzezinski brought in Chuck Todd, NBC’s Meet the Press host, another pundit who also said that abandoning Trump might be bad for other Republican candidates.

But he used a metaphor of his own.

“Do you believe Donald Trump is a stain on the party or a tattoo?” Todd said. “If you believe he’s a stain, you can wash it away and move after the election. If you believe it’s a tattoo, then you don’t want to be associated with him.”

But Trump always says Todd is part of the liberal news media out to get him. So why not listen to Republican and conservative voices that Brzezinski presented Thursday?

One was Elise Jordan, a former advisor to Rand Paul, the Republican Senator from Kentucky who ran unsuccessfully against Trump.

“He brings out the very worst of our country, not the best,” Jordan said of Trump.

The intervention “won’t make Trump happy,” she said, and implied that it won’t change him.

Michael Warren of The Weekly Standard discussed “the soul of the party.”

“Republicans are sort of waking up,” he said. “They sort of got a hangover after spring break and they’re realizing ‘What did I just get on me last night?’”

Brzezinski expressed puzzlement as well but in a different way. Before the campaign, she said, she knew Trump and liked him. He has a kind, generous side, she said. But something has changed. 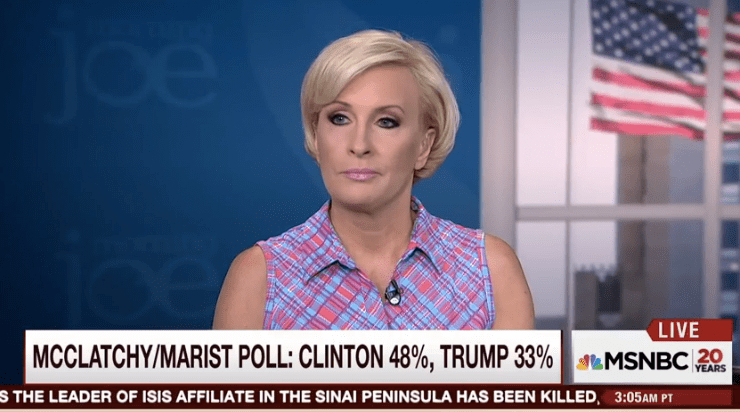