An impromptu protest outside of a New Jersey mayor’s home may have been staged and paid for by his opponents across the aisle. Democratic Belmar Mayor Matt Doherty, who is running for a seat on the Monmouth County freeholder board, saw about a dozen protestors bearing signs for Republican presidential nominee Donald Trump converge outside his home last week when he hosted a fundraiser for his running mates on the county slate.

Local Republican-leaning political blog More Monmouth Musings posted about the protest the next day. Records from the state Election Law Enforcement Commission show the Monmouth County Republican Committee paying Gallco Media, the owner of the site, $5,000 in May.

One of those protestors, Doherty wrote in a Facebook post, emailed him to apologize and said he had been paid to appear at the protest. Doherty had previously posted a picture of him holding a Trump sign to the Monomuth County Democratic Committee’s page.

“I received an email tonight from the young man standing with the sign protesting in front of my house,” he wrote. “He said he made a mistake and was very apologetic to me and my family. He said what he did was disrespectful and that he should not have done it. He said someone paid him to stand there with the sign. He also said he hoped it didn’t hurt my families feelings. He seemed very sincere and I will honor his request to delete my post.”

Doherty and his countywide running mates are running against a slate of Republican incumbents including Monmouth County Sheriff Shaun Golden, Freeholder Tom Arnone, Freeholder Serena DiMaso, and County Surrogate Rosemary Peters. The county race has become one of 2016’s major proving grounds in the state as Democrats hold out for coattails if Democratic nominee Hillary Clinton defeats Trump in November.

“I believe the young man who reached out to Mayor Doherty deserves a lot of credit for having the courage and respect to admit he made an error. We can only hope that whoever paid these protesters to, literally, stand in a gutter in front of a private residence and ‘protest’ can one day find that same courage to admit their mistake.” 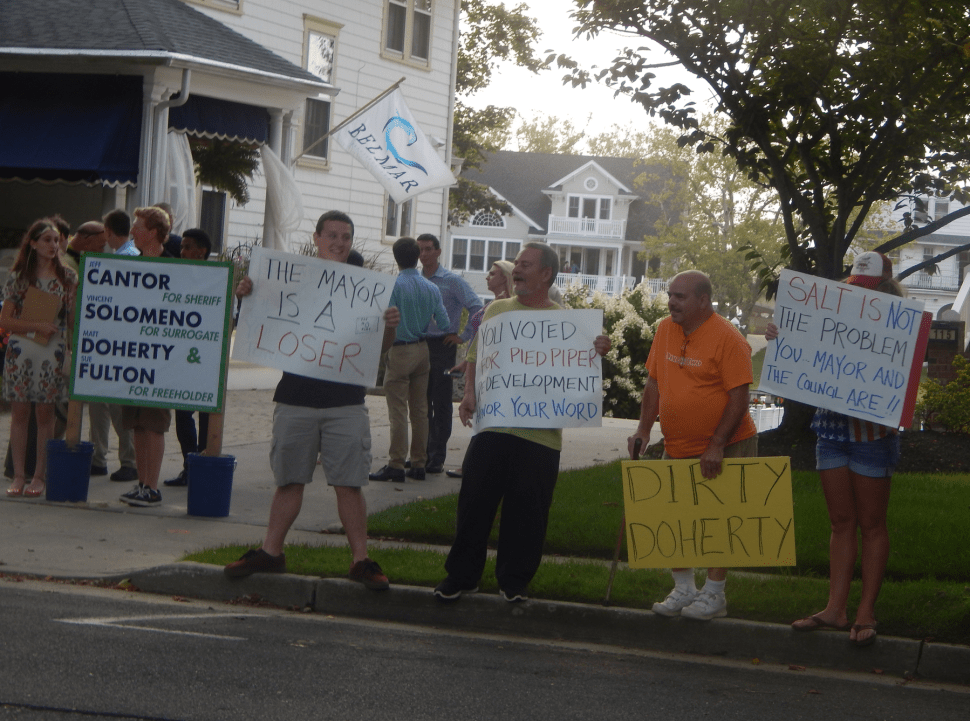