Following allegations from the Monmouth County Democratic Committee that their Republican counterparts paid protestors to assemble in front of Belmar Mayor Matt Doherty’s home with signs for Donald Trump during a fundraiser last week, the Republicans are hitting back. Tom Szymanski, executive director for the Monmouth GOP, said Tuesday that the protest came out of voters’ frustration with Doherty over a disputed liquor license.

Monmouth Democratic Chairman Vin Gopal had cited a $5,000 payment made in May from the Monmouth GOP to Gallco Media, which owns right-leaning political blog More Monmouth Musings. The site had posted about demonstrators outside the event, where some held signs reading “make Belmar great again.”

Doherty, himself running for a seat on the county freeholder board this year, said that one protestor apologized to him and said he had been paid to appear.

PolitickerNJ was at the event that night, where Sen. Cory Booker encouraged a crowd of Democrats to vote down the ticket in Monmouth’s countywide races in November.  Protestors not pictured in this outlet’s original post carried assorted official Trump lawn signs. One man in a gorilla mask carried a handmade sign reading “Obama did Harambe.”

“It is libelous for Belmar Mayor Matt Doherty to falsely accuse Monmouth County Republicans of paying peaceful protestors to sit outside his high dollar fundraiser with Senator Booker,” Szymanski wrote by email. “We had absolutely nothing to do with it, and the Mayor knows it.

“As is evident from photographs taken at the event, the demonstrators appeared to be representing ‘Salt Waterfront Belmar,’ a waterfront bar that sits completely vacant because the mayor and Council refused to transfer the establishment’s liquor license, despite the fact that they approved a redevelopment agreement for the property nearly three years ago. Now the Borough is being sued for $4.5 million dollars in damages, with Belmar borough taxpayers on the hook.

“The signs held by the demonstrators indicate that they were representing that business. This is not the first time Mayor Doherty has angered his constituents in Belmar due to his poor decision making as mayor.” 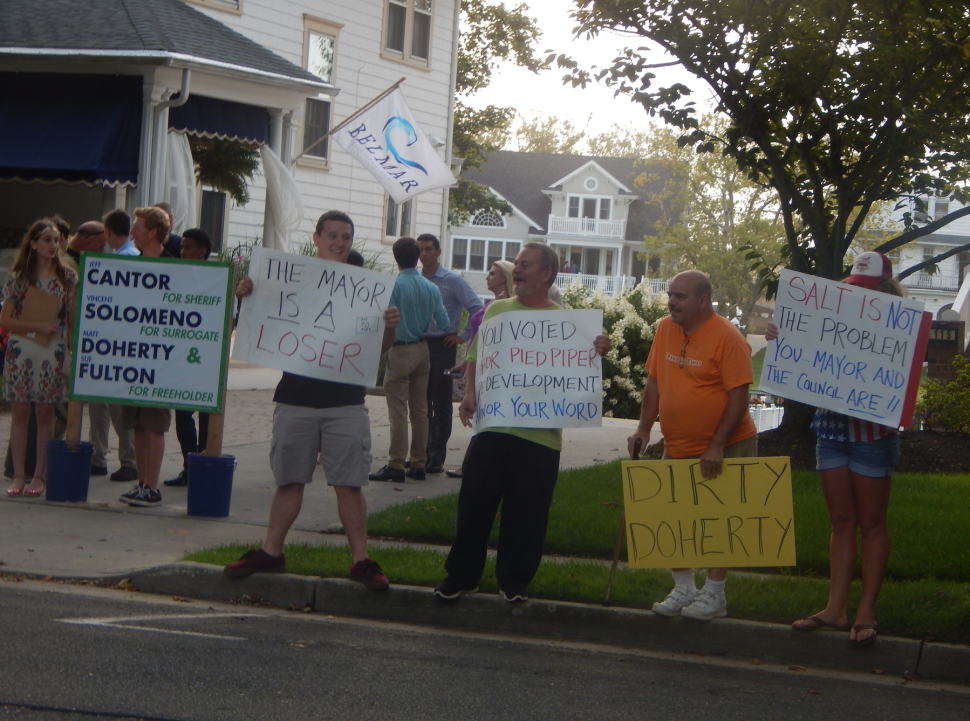