“Normal? I have no normal“

Just two words, from Joanna Wellick in the backseat of a murdered man’s SUV, sent me into a hours-long frenzy with reactions ranging from “That’s incredible!” to “Fuck You, Sam Esmail!” and every possibility in between because I–and I’m sure I’m not alone in this–thought that Mr. Robot had just revealed Ollie, Angela’s former, unfaithful puppy-dog-dumb boyfriend, had somehow been a third figment of Elliot’s fractured psyche this entire time. With visions of season one clue hunts dancing in my head I even had about three-quarters of a recap written up with this as the central thesis before I remembered, well, before I remembered this:

Somehow, in between the madness of season two and the complex web still being unstuck from season one, I forgot possibly the most tense scene Mr. Robot has ever produced; a standoff disguised as small talk, in the season one finale, between Elliot and Joanna Wellick. It’s a scene worth revisiting if we’re going to parse through what’s happening in episode nine, “eps2.7_init_5.fve”, because friends there is a lot happening.

The season one scene in question follows Elliot waking up in Tyrell’s SUV, three days after the 5/9 hack and Tyrell’s disappearance-slash-murder-by-popcorn-gun. Elliot, shaken by Joanna’s arrival, lies to her. Tells her his name is Ollie. She, in turn, lies to him, and says Tyrell had just called her from his car phone. In the middle of all the deception and back-talk, Elliot says something key, to his invisible audience: “You’ve got to help me get out of this. There’s something about her. I feel like she can hear us.”

There IS something about Joanna Wellick. (Even Esmail himself hinted she’s a much more important character than we think). But what? “I feel like she can hear us,” Elliot said, and I feel there’s weight behind that. Not that Joanna can literally read minds–although would you even be surprised at this point?–but that those cold, blue eyes clearly flash past “Ollie,” past simply “Elliot Alderson” and into the splintering tapestry that is Elliot’s mutli-person personality. Something tells me Joanna has met them all.

And what timing. Because if this episode is any indication, that tapestry is tearing itself apart. Esmail reached into his constantly-expanding bag of visual tricks to demonstrate the idea that Elliot and Mr. Robot are breaking apart, separating like oil poured into . Elliot hearing Mr. Robot from the other side of a bathroom door as he takes his first free piss out of prison. Elliot locked in a completely separate subway car from Mr. Robot, his head filled with the jarring, anxiety-raising sound of a homeless man’s keyboard. Elliot, sitting inert in a recliner watching Mr. Robot talk calmly to Darlene. The edges are smudging, the lines blurring. “Somethings happening with us,” Mr. Robot says. “We can’t do this.”

And as we learn by episode’s end, there are still layers, deep below the ones we see and that I think Elliot even knows himself, that are at play here. Things Elliot is keeping from us, from Darlene, possibly from parts of himself. Those lies come with a name, Phase 2, which The Dark Army claims was Elliot’s idea from the beginning, whatever it is.

But who is Elliot, at this point? Is there a concrete, base model Elliot Alderson anymore? The cast, for their part, aren’t making it easy to tell. Christian Slater has been playing Mr. Robot occasionally timid, nervous, far from the kingshit hacker master from season one. Or watch Rami Malek’s eyes when he commands the Dark Army members to stay put. They don’t shake. They don’t look away. They’re not the eyes of the morphine addict who we met in the pilot that cried next to the dirty mattress on his floor nightly. It’s like Elliot says; he doesn’t have a “normal.” His personalities have become fluid. They change with every keystroke.

Which brings us back to Joanna. Or, actually, back to her husband, who has haunted this entire season like a ghost. With each passing episode, it’s beginning to seem more and more like that’s all Tyrell ever was. Is it possible that Tyrell was yet another hallucination, some other untapped portion of Elliot’s brain? It seems ridiculous to think Elliot was somehow both a anarchist hacker vigilante AND a wealthy corporate executive with a wife and child.

And yet, and yet…how does Joanna know where Elliot lives? How does neither he nor Mr. Robot know what Stage 2 is? “There’s something about her,” Elliot said. Like she knew what he was thinking. Like she knew who he really was, which is more than even his own sister can say. More than we can say.

And if that’s true, Joanna knows Elliot shot Tyrell, be it in reality or in his own head. Which means she has a promise to keep, made in the same conversation with Elliot from last year’s finale: “Hvis du har gjort ham noget, så slår jeg dig ihjel.”

Translated from Danish: “If you’ve done anything to him, I will kill you.”

“I had this dream, which if you know me is pretty rare…“

We leave Darlene this week the same way we left Elliot last season: With a knock on the door.

And just like with Elliot, we have no idea who is on the other side…for now. But there’s options. While Elliot was in jail, Darlene’s swam herself out into murkier and murkier waters, and now the sharks are circling. For one, despite what Cisco claims it’s still unnerving that the world’s most dangerous group of hacker terrorists was requesting pictures of her, especially now that they’re good and pissed off, and especially especially just because they straight up murder FBI agents with machine guns and drive needles under fingernails.

But there’s also a chance it’s Cisco himself pounding away at the door, and he’s just as likely to be dragging something (or someone) disturbing with him. On a return trip to Susan Jacob’s house to retrieve a leftover FSociety VHS tape, Cisco encounters…something. Or someone, gasping and wheezing in the darkness of the smart home (Michael Drayer’s reaction, and the subtly of both the lighting and the noises behind the couch, is another example of Mr. Robot season two nailing horror-movie elements.)

At least with Angela, the threats are out in the open. Hell, the threats brought her food. Dominique DiPierro pays Angela a visit to say, thanks to Ollie (or was it Elliot??), the FBI is well aware Angela dropped the infected CD into Allsafe’s hardware. What the FBI is incredibly unaware of, is that suddenly-super-spy Angela is sitting on the information that the toxicity levels of the Washington Township Plant, the same toxicity that killed her parents, is still dangerously high.

And what basically no one knows is that Whiterose, who is low-key one of the most powerful people alive on multiple continents, is willing to do terrible things to keep people away from that plant. That, I think, is what’s keeping Angela’s inconsistent storyline this season interesting; the fact that the closer she gets to any truth, the further she digs herself into a hole she can’t even see. She’s definitely hardened between seasons. She’s become a dangerous player. A fighter. But as DiPierro told her, it’s the fighters who end up drowning in the end. 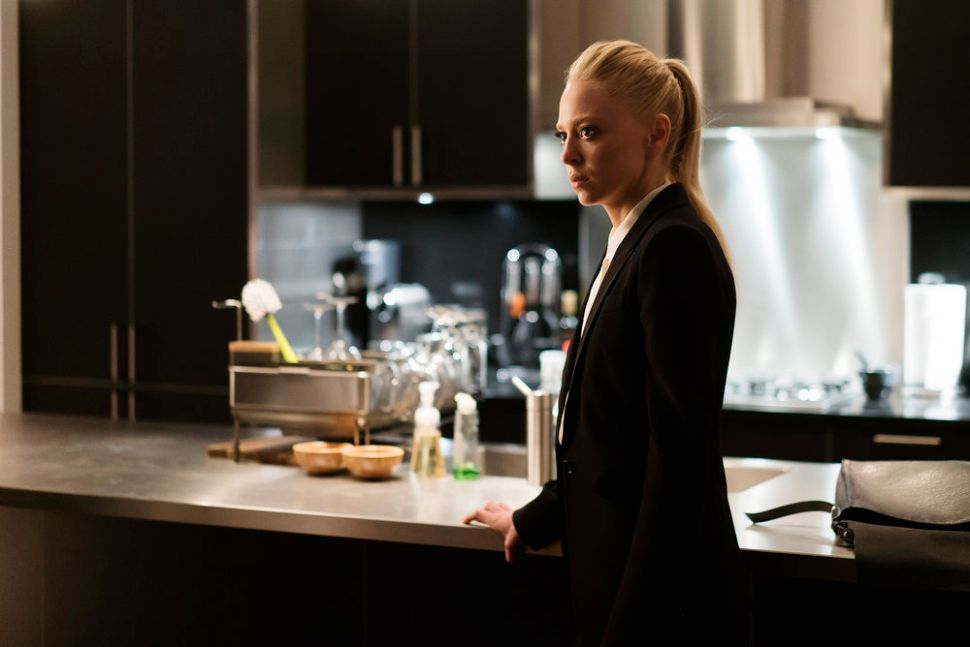