For Joe Biden and Tim Kaine, being “out of touch” is charming and infinitely meme-able. They are our wholesome, loveable uncle and step-dad, eating ice cream and playing harmonica. They are trustworthy without us needing to know a thing about their policies or track record. They both agree with the vast majority of Hillary’s policy platform, and yet angry protesters have never held posters with crude drawings of Tim Kaine, shouting, “Lock that bitch up!” They don’t speculate on his ability to satisfy his spouse. He’s never had to deal with constant dismissals of his abilities because he’s shrill or sexually unattractive while the same critics are also snidely remarking that his success is only due to his gender. If you’re a man, I imagine you’ve never had to deal with that either.

Do you want to know the most frustrating part about being a woman dealing with sexism? We can’t complain. We can’t even call it out in any meaningful way without smug self-described political commenters implying we’re whiney, and vicious alt-right twitter monsters gleefully commenting “TRIGGERED!” as a means of undermining any legitimacy of the argument by implying we’re just the worst stereotype of a “social justice warrior” wheedling out thin evidence of injustice where there isn’t any as a way to, I don’t know, distract from the loneliness of being an unlovable hag.

That’s a favorite stereotype, that the woman complaining about sexism is only doing so because she’s never benefitted from being pretty enough to objectify. The word feminism has lost a minor PR battle. Now, we are all bitter, jealous and man-hating, not to mention ugly. Empirical evidence aside (I mean, have you seen Beyoncé or Emma Watson?) I’ll just be straightforward and say that’s not the case and you know it.

Anyone who claims that feminism is making things better for women than it is for men is incorrect.

Maybe it makes you feel better to create this version of a feminist so you don’t have to take what we’re saying seriously, but let’s all just be on the same page here and acknowledge that pretending feminists are all fat, lonely cat ladies doesn’t do anything to diminish the substance of our argument. (And for the record, nothing wrong with being fat—everyone gets lonely sometimes, and cats are adorable).

That’s one of the issues, isn’t it? The fact that people seem to think calling a woman “fat” is the nuclear bomb of rhetorical argument. Internet trolls drop a “You’re fat!” like it’s the Enola Gay, smiling as though their bon mot has proven them to be the second coming of Oscar Wilde. If they were clever, they’d realize that the power they’ve put in the word “fat” as an insult has proven the very thing they’re claiming doesn’t exist: Society has put so much worth on a woman being conventionally desirable that her inability to be so is egregious enough to counter her ideological positions.

People get this wrong all of the time, so forgive me for stating the obvious: Feminists are people who want men and women to be equal. They always have. There may be disagreements of how best to go about this among feminists, but that doesn’t diminish the core message. Every single political ideology and group includes differing opinions and challenges. The most important one among feminism now, in my estimation, is ensuring proper recognition for the unique challenges faced by women of color and transgender women. It’s not, as you may believe, whether or not to kill the men or put them in work camps for a little while so we can laugh at them. Anyone who claims that feminism is making things better for women than it is for men is incorrect. Personally, I’ve never heard a feminist advocate for that, but if a woman calling herself one did, then she isn’t a feminist, she’s a just a . . . bad person, I guess? That’s not even a convincing straw man you’ve built there.

But now, in 2016, for those progressive, liberal boys, it sometimes seems as if being a woman is an advantage! Women get the choice to sleep their way to the top if they so choose or marry rich and get to stay home doing nothing while the man works his butt off providing for her lavish lifestyle, and nowadays you’re not even allowed to call her a slut for it.

Those are the men this article is for—not the basement dwelling Internet trolls, but the men who know that objectification and sexism is wrong but still secretly wonder if all this fuss isn’t over nothing.

Caitlin Moran says it better than anyone else in her seminal text, How to Be a Woman: “Even those men born postfeminism, raised on textbooks and marches and their own mothers leaving each morning for the office, however much they might believe in the theoretical equality of women and respect those around them, are scarcely unaware of the great sweep of history that went before. A quiet voice inside—suppressed but never wholly silenced—says, ‘If women are the true equals of men, where’s the proof?’ And it’s not just a voice inside men. It is inside women, too.”

Men are physically stronger than women. It’s true. That is a provable, biological fact. And due to the particular bad luck of our biology, when we have sex it has the distinct possibility of putting us out of commission from all of the running and antelope chasing for the next nine months, plus or minus some time for getting our nipples chomped on, and then plus or minus 18 years of childrearing while the man hunts the antelopes for all of us, which seemed like a logical arrangement for a family who all had the same goal of getting this tiny combination of our genes alive for long enough to pass those genes on. The problem came when people saw antelope hunting as more important and prestigious than taking care of children, and that power translated into a belief that men were more intelligent or sensible than women and that they would be the only ones allowed to get an education, own property, make the laws and be the leaders for the next several thousand years.

But now, in 2016, for those progressive, liberal boys, it sometimes seems as if being a woman is an advantage! Women get the choice to sleep their way to the top if they so choose or marry rich and get to stay home doing nothing while the man works his butt off providing for her lavish lifestyle, and you’re not even allowed to call her a slut for it. A pretty woman gets free dinners and drinks thrown at her like Mardi Gras beads (and if she’s topless she also gets free Mardi Gras beads thrown at her!).

All that, and women get to parade around with their little cliques of “female empowerment” calling for all men to become slaves in work camps and if you criticize them you’re automatically a sexist. “What about little cliques of men having fun empowering themselves, hmmm?” You may secretly wonder, never aloud for fear of getting attacked by vicious, politically correct feminists. “Why can’t we have that fun?”

If you were born after 1985—or, more specifically, after the release of Working Girl (1988)—you’ve been raised on a culture of “girls can do anything boys can do!” You may know, intellectually that when Hillary Clinton was born, women simply weren’t allowed to be astronauts, that she would be 17 years old before a bill would be signed into law making it illegal to discriminate based on race, religion or sex, but you’ve never really felt it.

But just to touch on that for a moment, it took until 1964 before we thought that would be a good idea to make discrimination illegal. I know it seems like impossibly long ago. But it wasn’t! For comparison sake, the high five wasn’t invented until 1977—13 years later!—and the high five seems like it’s always existed.

And it’s not as though things got immediately got better once legislation was passed, like an evil spell breaking in a Disney movie, but it’s hard to recognize the lasting ripples of something people try so hard to ignore at the cost of being labeled one of those terrible man-hating feminists.

What a horrible trap: Since “sexism is over,” you’re allowed to be ironic about it and ask a girl to make you a sandwich as a hilarious joke or call the first woman to accept a major nomination for president a bitch, and we’re not allowed to call you out without opening ourselves up to, at best, being called a wet blanket or, at worst, to more of the cruel, angry sexist harassment we were calling out in the first place.

Well I’m calling it out. And it’s bullshit. And if you can’t call yourself a feminist, you’re bullshit, too. 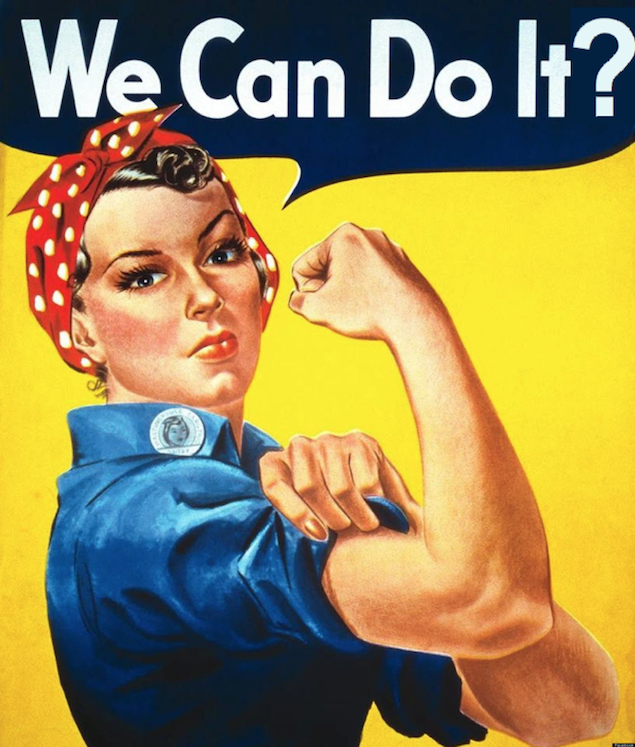