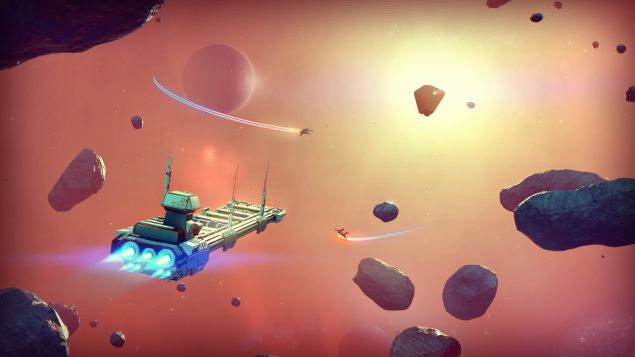 “Science is no more than an investigation of a miracle we can never explain, and art is an interpretation of that miracle.” – Ray Bradbury, The Martian Chronicles.

Dreams exist at the boundaries of reality. They can often seem tangibly lifelike, yet when we awake and try to describe it we find the details just out of reach. A time lost in a place that we can longer go to.

No Man’s Sky, a procedurally generated, near-infinite interplanetary exploration game just released last week for PS4 and PC, is nothing less than the pure distillation of a dream.

It’s the beginning of 2001: A Space Odyssey with the apes dancing around the monolith. It’s every great science fiction book you’ve ever read that set your mind exploring to the farthest reaches of space. It’s so wildly imaginative that I felt inadequate to critique it. Who am I to tell you how good someone else’s dream is?

I climbed over a hill with the aid of the jetpack attached to my spacesuit and had the sense of wonder you get in ‘Jurassic Park when you first see the huge dinosaurs onscreen, and it’s so idyllic you want to live there.

It has been massively hyped for over a year; so much so that weeks ago a fan spent over a thousand dollars to purchase an early copy of the game. Twitch.tv streamer Gord Mcleod summed up the popular reaction to it when he told me “It’s the space game I’ve been dreaming of for many years. I love the scale of the game, and the endless exploring.”

With visions of limitless possibilities dancing in my head, I downloaded it for PC and went in blind: ignoring all reviews or gameplay footage. What followed was hours of beautiful frustration as I was tasked with repairing my damaged spacecraft and given extremely limited information on how to do so. A female robotic voice in the game told me to shoot small rocks to get iron, and when that was done there was another resource I had to find.

Okay good, it’s a checklist. I can work with this. I’m not going to be totally in the dark.

I climbed over a hill with the aid of the jetpack attached to my spacesuit and had the sense of wonder you get in Jurassic Park when you first see the huge dinosaurs onscreen, and it’s so idyllic you want to live there. I was surrounded by plants, animals and rock outcroppings that looked similar to those found in real life but with bold and vivid colors, shapes, and sizes that were very different from anything in our universe.

I started blasting indiscriminately, picking up everything I could, and then the robotic voice announced that hazard protection levels on my suit were dropping which meant that I had to find a particular resource to recharge my suit. I couldn’t find the resource, and I had no idea where my ship was. I experienced fear and bewilderment.

How do I find anything? 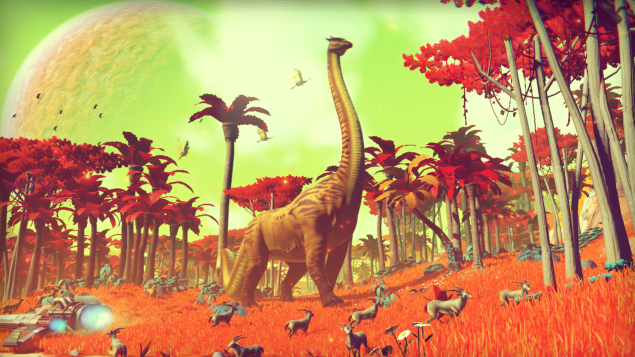 I looked around and a small previously unnoticed icon of a ship was near the top of my screen and acted as a compass. As I walked in the direction of the icon, numbers counting down how long it would take me to arrive at my destination appeared.

The next hour or so I was in constant peril trying to stay alive long enough to harvest the resources I needed to fix my ship and blast out of there. I soon discovered that I had only so many things I could carry in my suit and spaceship.

I’m reminded of George Carlin’s famous routine about stuff: “That’s the whole meaning of life, trying to find a place for your stuff.” Inventory management is incredibly important to the game and limited storage space in your suit and ship is one of the few negative issues that really slow things down in the early going.

Repairing your ship is the end of clear directions, and is where No Man’s Sky really begins. You can go anywhere! Any planet or star system that you see can be reached. But what do you actually do in the game besides explore?

In your travels you will find that although every setting is unique, everything eventually has a similar quality to it.

You meet aliens at various mostly miniscule locations which provide you a place to buy and sell things as well as uncovering different words of their language. Also you gradually learn more about the Atlas, a mysterious floating red cube that contains knowledge of what seems to be an abandoned alien race. Did they create the universe ala the movie Prometheus? That is what this extremely loose frame of a plot seems to hang on, but the bulk of the game, despite its grandeur, devolves into a mining and trading simulator in a universe nearly empty of sentient life

In your travels you will find that although every setting is unique, everything eventually has a similar quality to it.

The massiveness and beauty of the universe by the small team of creators at Hello Games is an unbelievable accomplishment and the swelling music score actually changes with your locale, but like anything else in life it can seem mundane if you stare at it long enough. No matter how grand something is, you can get used to it. This is the reason why in the 70’s era of professional wrestling Andre the Giant was seldom in the same place for very long. The promoters knew that the fans would eventually get used to the spectacle and lose their sense of wonder.

While playing I had to constantly battle both sides of my brain. I wanted to get lost in the journey. I didn’t want to lose my sense of wonder, but logical questions kept forming that took me out of it, about the lack of cities, or the origin of the protagonist for instance.

You never see your character, a purposeful choice in a game in which you create your own canvas. Indeed this is less of a game, and more of an elaborate, ever changing art piece that defies the stick and the carrot motivation that is central to games as a whole. Like the famous Skinner Box experiments of the 1930s with rats gamers have been conditioned to press that button to get the next reward: Pac-Man needs to get those Power Pellets, Mario needs to save the Princess, and now you turn on your app wherever you are to catch those Pokémon.

There’s no obvious goal in No Man’s Sky. There’s no clear cut next thing. Buying new spaceships without a place that you have to fly them to is certain to alienate a large percentage of people.

There’s hardly even any real danger. The very few things that do attack you are often quickly dispatched, and on the rare occasion that you actually die, you reappear at a nearby location where you can easily retrieve the contents left on your body.

All we are left with then is space exploration for its own sake, which admittedly is rather appealing to those who would boldly go where no one has gone before. How you respond to this scenario will go a long way towards determining whether you find this pursuit invigorating or yawn worthy.

How do you judge a dream?

Like any piece of art, how strong an emotion it stirs in us is the only real determining factor in judging its worth. 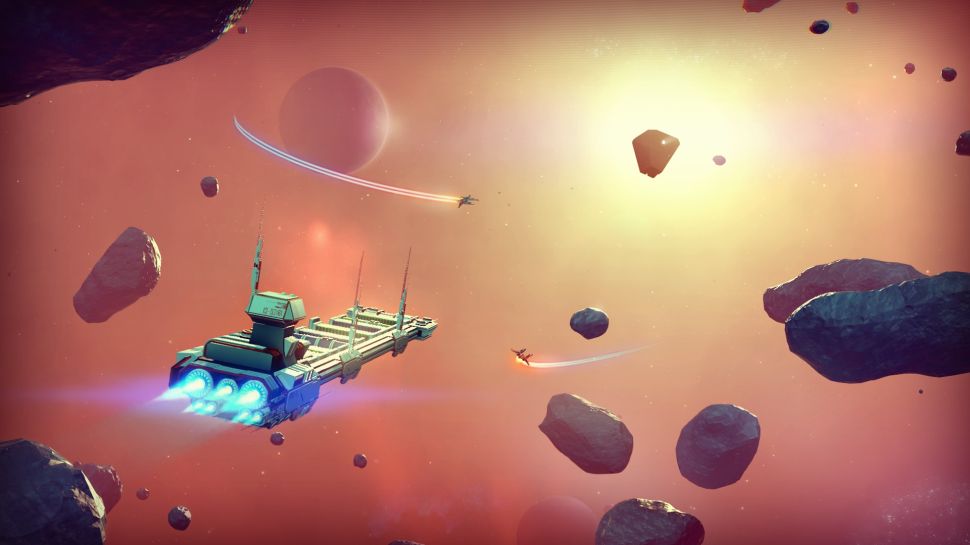