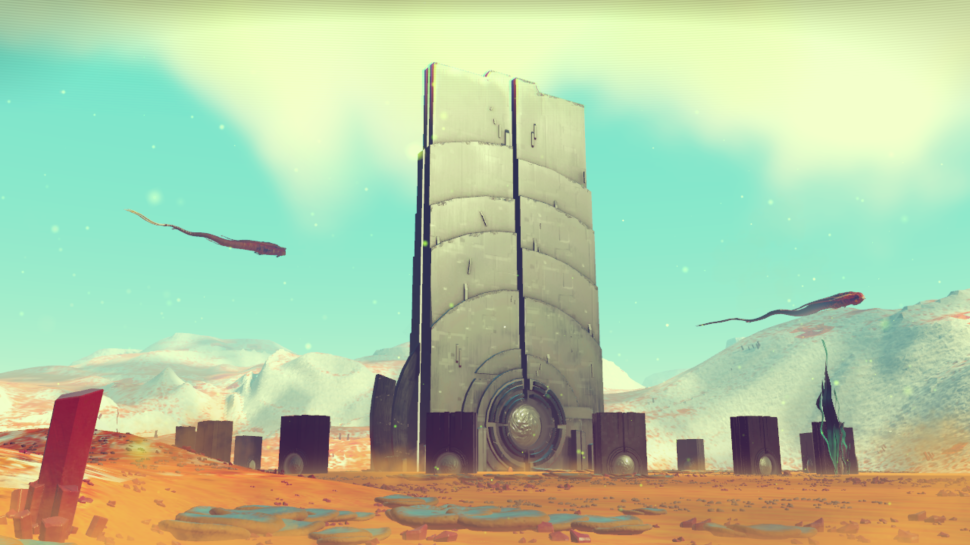 A monolith in the game. These represent some ancient, mystical culture at the heart of the game’s lore. (Image: No Man's Sky press kit)

There’s something missing from No Man’s Sky that for me captures how the game falls short. Even if you accept its chief architect, Sean Murray’s, admonition that this is a different kind of game, a game about exploration. The planets do not have poles.

You know, north pole. South pole. Colder at the top. Hot in the middle. Temperature determined by the concentration of solar rays. That whole thing. The planets don’t have those, and by extension, the planets don’t really vary in meaningful ways across their vast surfaces. At least not that I’ve found.

For those who tend to tune out video games, No Man’s Sky has had such epic hype its brought non-gamers (like me) back to the genre. It got a fairly breathless write up in The New Yorker, for goodness’ sake. The core of the game is this gigantic universe filled with so many worlds that you don’t have enough years in your life to explore them all. The worlds and the star systems they are found in are all designed by computers, using rules created by the team at Hello Games. This notion of an effectively limitless virtual universe has been a source of great excitement. I have written about it (and related other giant sandbox games) a bunch of times in the last couple years.

During his many media appearances previewing the game, Sean Murray liked to expound on the “realness” of everything one sees in the game. For example, if you see a star in the sky, that’s really a place that you can fly to in your spaceship. When you find a planet, you’re the one that has discovered it. That fact will be logged in the game’s records, forever. Planets are really planet-sized. If you just wanted to walk around one, it would take a very long time (depending on that specific planet’s size) Then there’s this feature: if you land on a planet and it’s dark, that’s because you’ve landed on the side of the planet that has rotated away from the star it orbits. It’s really night.

Yet that’s really the only environmental impact you can discern from the forces of the nearest sun. If it has any impact on the temperature where your avatar is standing, it’s not perceptible.

Maybe there are planets out there that have poles. I haven’t explored even a million of them, but the sameness over No Man’s Sky’s worlds bums me out. It’s true that there are a quadrillion worlds and that they are each unique little snowflakes. That said, once you’ve landed on a planet, you’ve pretty much seen it. In my experience this weekend (and what I have gleaned from others who are playing it), worlds are homogeneous across their surfaces.

On our planet, we’ve got forests and deserts and tundras and swamps. In No Man’s Sky, a world is pretty much just one of those things, stretched across its whole surface. So exploring any one gets boring quickly. In fact, I wouldn’t really call it exploration. I’d call it poking around for the next resource you need to get to the next stage of the game.

For those who were disappointed by the gigantic game space that turned out to be thin on on real variability, there’s always Star Citizen.

(Maybe, after all, it does take $100 million to craft a virtual universe?) 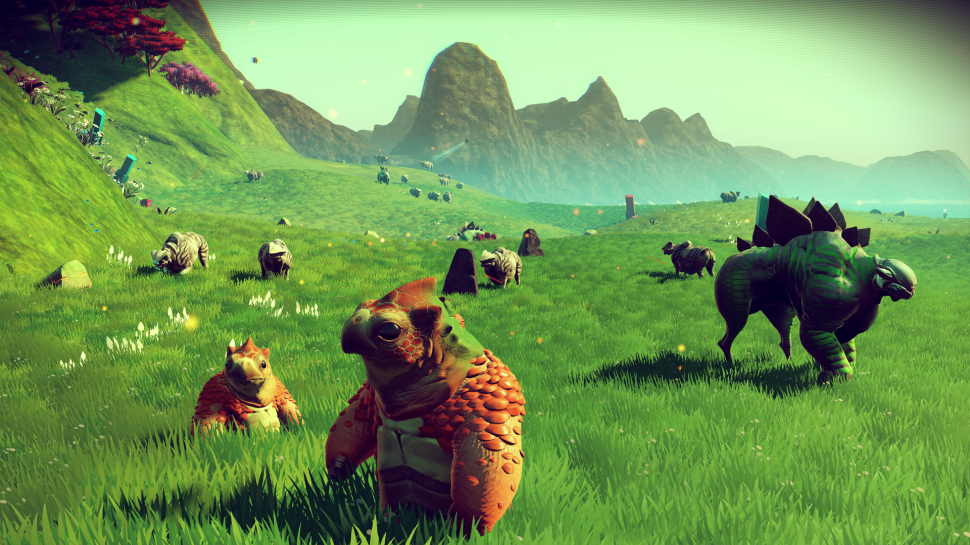