He’s done it again. A couple weeks ago, it seemed that Donald Trump’s gaffes would be difficult to top. First the Republican nominee encouraged the Russians to steal Hillary Clinton’s missing emails—a criminal act of espionage. Then he repeatedly attacked a Muslim Gold Star immigrant family whose Army officer son was killed in Iraq.

Yet Trump’s managed to top even those virtuoso own-goals. His sly encouragement of Second Amendment enthusiasts who might want to assassinate the Democratic nominee caused outrage and encouraged mounting defections from the GOP over Trump’s lack of self-control. It’s never a good day in politics when the Secret Service must have a word with a candidate about assassinating his rival.

Although this wasn’t the first time Trump has pointed a finger at Obama and Clinton as having created ISIS, the emphasis he placed on saying “founder” repeatedly caught the attention of the commentariat. Even some Trump supporters were more than a little taken aback by the GOP nominee’s gleeful tarring of the president as an alleged jihadist.

Thursday morning Hugh Hewitt, a well-known Republican commentator who’s backed the GOP nominee, interviewed Trump and gave him a golden opportunity to repudiate his incendiary words. Trump did nothing of the sort, instead doubling down on his accusation. The exchange was so shocking it’s worth quoting at length:

HEWITT: Last night, you said the President was the founder of ISIS. I know what you meant. You meant that he created the vacuum, he lost the peace.

HEWITT: But he’s not sympathetic to them. He hates them. He’s trying to kill them.

TRUMP: I don’t care. He was the founder. His—the way he got out of Iraq was, that—that was the founding of ISIS—okay?

As is his custom, Trump insists he’s done nothing wrong by calling Obama a terrorist.

It’s not every day the presidential nominee of the Republican Party calls our commander-in-chief a “founder”—that is a terrorist, a traitor, and “MVP”—of the global Salafist caliphate, an organization that commits mass murder and even genocide. Not to mention that ISIS seeks to kill Americans with gusto at home and abroad.

Trump’s claim is so absurd as to render terror experts speechless. In the first place, ISIS was born in a practical sense in 2006, when elements of Al-Qa’ida in Iraq fused with bitter-enders from the Saddam Hussein regime that the United States overthrew in its invasion of Iraq three years before. Back then George W. Bush was president and Barack Obama was a junior U.S. Senator from Illinois.

None of this is to defend Obama’s track record against ISIS, which in column after column here I’ve lambasted as incompetent and lackadaisical. His pseudo-war on that murder gang and its imaginary caliphate has been a train-wreck of quarter-measures, muddled strategy, and outright lies. Obama ought to never live down his dismissal of ISIS as the “JV team,” but that’s a far cry from “founding” the Islamic State.

There’s no doubt that Obama’s withdrawal of American forces from Iraq in 2011, hailed as a great victory at the time, was strategically harmful and enabled ISIS’s meteoric growth in the Middle East. However, the president had little choice there, since the democratically elected Iraqi government in Baghdad demanded that the U.S. military leave their country. Not to mention that withdrawing our troops from Iraq was supported by Donald Trump.

Saying Obama and Hillary “founded” ISIS therefore is a ridiculous claim that deserves to be taken no more seriously than related tinfoilisms like “Jews did 9/11” or “My cat is the Illuminati.” It’s therefore deeply alarming to see the GOP nominee say it—repeatedly.

It’s not difficult to see where Trump gets such wacky ideas. Mike Flynn, his national security guru, has repeatedly come close to saying the same, hinting that Obama wanted ISIS to succeed. Flynn is a retired Army three-star general whom Obama fired as director of the Defense Intelligence Agency with ample cause.

Since then, Flynn’s gotten cuddly with the Russians, regularly appearing on their propaganda network RT, even admitting he’s taken Kremlin money for a photo op with Vladimir Putin. This is where things get really interesting. “Obama created ISIS” has been a Kremlin trope for a couple years now and it’s frequently trotted out by Putin’s mouthpieces and online trolls. When your campaign is riddled with people on the Kremlin payroll, with deep ties to Moscow, it’s not surprising that the candidate starts mouthing their disinformation.

As I’ve recently explained, the intelligence community believes Trump is an unwitting Russian agent, and this is why that matters. It’s a remarkable turn of events when the GOP, a party until recently known for its hardline on the Russians—as Mitt Romney reiterated in 2012 and was mocked by Obama and the literati for—is taken over by people who peddle Kremlin agitprop.

The Kremlin’s infiltration of the Trump campaign has finally hit political paydirt, with the Republican nominee spouting unfiltered Russian propaganda that paints the sitting president as a turncoat and abettor of terrorism.

To say nothing of the fact that members of Team Trump have hailed the Wikileaks attack on Hillary Clinton and the Democrats, which is a transparent Russian operation. Not to mention a crime aimed at subverting our democracy. Just this week, Roger Stone, a longtime GOP dirty trickster and Trump intimate, stated he’s been in touch with Julian Assange, the Wikileaks boss who’s been holed up in the Ecuadorian embassy in London for four years, on the lam from rape charges in Sweden.

Whether or not Assange is the Kremlin agent he increasingly seems to be, he’s unquestionably been a key player in two criminal conspiracies involving the theft and compromise of hundreds of thousands of classified American documents by Bradley (now Chelsea) Manning and Edward Snowden. Those crimes did enormous damage to our government and our allies, so seeing the GOP nominee’s campaign in contact with Assange raises troubling questions. Especially since the latest intelligence indicates that the cyber-pillage inflicted on the Democrats by Russian hackers was even more extensive than initially reported.

We’re in uncharted waters here. The Kremlin’s infiltration of the Trump campaign has finally hit political paydirt, with the Republican nominee spouting unfiltered Russian propaganda that paints the sitting president as a turncoat and abettor of terrorism.

Let’s be clear: saying Barack Obama “founded” ISIS is no more accurate than saying Abraham Lincoln “founded” the Confederacy, that Franklin Roosevelt “founded” Japanese imperialism, or John Kennedy “founded” the Viet Cong. It’s a lie and an ugly one that needs to be called out.

No presidential nominee of a major party has ever said anything quite like this. To cite the example that comes closest, back in 1944, when Franklin Roosevelt was running for an unprecedented fourth term in the White House, his Republican opponent, New York Gov. Thomas Dewey got word that FDR had advanced warning of the Japanese attack on Pearl Harbor on December 7, 1941.

This was untrue, although that particular conspiracy theory has never died, despite thorough debunking by reputable historians based on declassified intelligence. Dewey wanted to hit FDR with this rumor, specifically that we were decrypting Japanese diplomatic messages in 1941, and Army intelligence got word of the GOP nominee’s plan.

They were worried, since they had no idea how Dewey heard such rumors—particularly because they contained an important kernel of truth. Army signals intelligence really was reading encrypted Japanese diplomatic messages—they called the program MAGIC—and this was one of the most closely guarded secrets of World War II, since MAGIC was a goldmine of classified information about Tokyo’s war effort.

Gen. George Marshall, the Army chief of staff, dispatched one of his top intelligence officers to talk to Dewey three times, and Marshall spoke with Dewey once about the matter on the phone too. He pleaded with the GOP nominee to never mention our code-breaking against Japan in public and Dewey, a patriot, complied.

Dewey didn’t quite believe Marshall—he sensed an FDR cover-up—but he went along with the Army’s request, since he had no desire to help our enemies or risk the lives of our military. We were a different country with a different Republican Party then.

As is his custom, Donald Trump insists he’s done nothing wrong by calling President Obama a terrorist, and he’s said he’ll keep labeling the commander-in-chief and the Democratic nominee as ISIS “founders.” He’s already done so again on the campaign trail.

Insisting “I’m a truth teller. All I do is tell the truth,” Trump now says that even if he loses on November 8—which looks more likely with each passing day of his gaffes and bizarre statements—“it’s OK. I go back to a very good way of life.” The Republican Party may not be so lucky when Donald Trump is done with it. 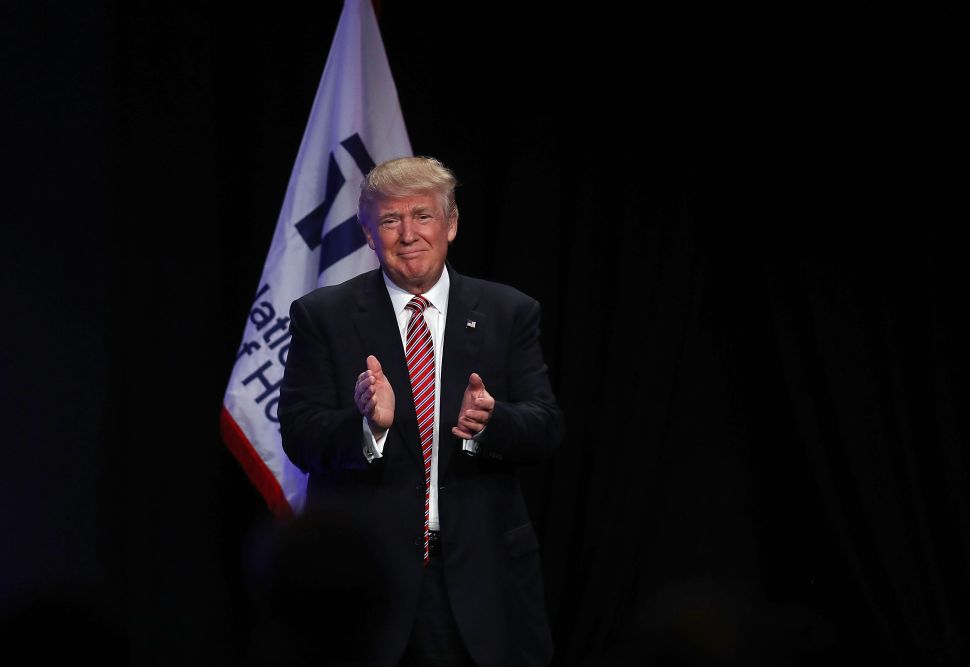