When it comes to the vitriolic fractiousness in American society that this extended election season has exposed—and worsened—Deval Patrick urges the long view.

The 60 year-old former Massachusetts Governor, Obama-confidante and oft-mentioned potential candidate for national office is re-reading his copy of The Federalist Papers at his summer home in the Berkshires, wanting to help place in their proper historical perspective the raw divisions that are revealed hourly on news sites.

The frenzied chants of “Lock Her Up!” at Trump events, painfully evocative of National Socialist Party rallies in the 1930s, on one hand, and the untethered outer fringe of the Sanders camp, on the other, do not faze Patrick. In part this is because, as he notes, America has seen this sort of thing before. And in part it is because Patrick has seen how leaders can tamp down mistrust and build bridges that seemed on the surface unlikely ever to be built. He has done it himself.

Patrick ticks off a number of periods in America history when bitter divisions seemed unlikely to heal, but largely did. “We’ve had periods of fracture,” he notes. “I do think we have certain recurring debates in America. One is over the power and influence of the elites. Another has been over race. They recur.”

That isn’t to say that the former two-term governor isn’t concerned, because he is.  “I’m feeling as though there are two forces around the world that are on the rise,” Patrick says. “One is intolerance. The other is bully-style leadership. In the past, when both occur at the same time it has been a calamity. Historically, the United States has served as antidote to these phenomena. So what is most worrying is whether the United States will be an antidote again.”

Patrick is calm about what he calls “the Trump phenomenon,” optimistic that the civic venom that has been unleashed over the past year can at least be ameliorated, if not wholly pushed back into the tube whence it came.

“A lot of people are wound up [by Trump],” he says. “A lot of people were worried about the phenomenon of Bernie Sanders. But if you peel back what on the Trump side is at worst racism and at best an absence of decorum, and what you see on the fringes on the Sanders side, there are some important messages left: namely, that there is a powerful feeling of disenfranchisement, that there are important ways in which people feel unconnected to their government, that there is hate and there is resentment. But leaders have to listen to all the layers of the messaging. I saw that when I was Governor—although sometimes potshots are gratuitous, there are also messages that need to be heard.”

Patrick is reflective and absorbent by nature, which served him well as governor in tuning out the noise, understanding what it is in people that may enable them to find common ground, even despite themselves, and then presiding over sometimes unlikely connections between people of very different backgrounds and points of view. In Yiddish this is called “sitzfleisch”—the ability to endure or persevere. Part of it is a gift for putting people at ease and diluting tension in a room, qualities that he deployed aggressively when he was in office.

“The greatest power a leader has is the power to convene,” says Patrick. “Most people will take your call when you’re governor. Most people will come to a meeting if you ask them to, and that includes many meetings with people with whom they might not ordinarily meet. It’s important that people know each other.”

Patrick, who experienced more than his share of venom from the talk-radio crowd and critics on the right, is disposed to focus less on the vilification that anyone in modern public life must expect, but what he describes as “acts of grace” that stand out amid all of the angry shouting. He recounts the wrath directed his way from certain quarters when, in 2014, he offered to provide temporary shelter in two Massachusetts facilities for 1,000 Mexican children detained while crossing into the United States. He announced his plan, joined by Cardinal Sean O’Malley, the Archbishop of Boston, quoting Scripture and citing his sense of moral obligation.

“I believe that we will one day have to answer for our actions—and for our inaction,” Patrick said at the time. In so doing, however, he uncorked a furious reaction from many in Massachusetts, who filled talk radio air time and the comment sections of websites with rage.

One Saturday morning in the middle of the Mexican refugee storm, Patrick realized he needed to run an errand at his local Home Depot. He wanted neither to rouse the State Trooper who accompanies the governor every time he leaves his home nor to bother dressing as he normally would in public—instead putting on jeans, a sweatshirt and a baseball cap, and driving himself to the store, hoping to make his purchase quickly and anonymously and return home. Unfortunately, the store manager recognized him, and boomed out “Welcome to Home Depot, Governor!” as he entered, blowing his cover.

That set off one customer, who accosted Patrick and reamed him out loudly for endangering citizens by housing Mexican children at governmental facilities, admonishing him that illegal immigration shouldn’t be sanctioned, children or no children. Patrick heard him out, told him that he understood his position, and eventually walked to the back of the line of customers waiting for the cashier to ring them up. As he did, he recalls, one after the other of the customers leaned over to whisper to him “I’m with you on those children” or “I agree with you on those kids.”

Patrick’s ability to draw together people from very different worlds may derive from the fact that he has himself lived and worked in so many of them. Raised by a single mother on Chicago’s South Side, and nurtured by numerous teachers and “old ladies in church,” Patrick won a scholarship to a prestigious Massachusetts private school, where he successfully navigated an environment head-spinningly different from the one to which he was accustomed.

He went on to Harvard and Harvard Law School, and then, after a stint as a civil rights lawyer and a partnership at a prestigious Boston law firm, was asked to lead the Civil Rights Division in Bill Clinton’s Department of Justice. From there he was recruited into yet another world, that of the upper echelons of corporate America, as general counsel first of Texaco and then of Coca-Cola. In 2006 he entered elective politics as a complete novice, returning to Massachusetts to launch an improbable challenge to two established, well-connected political insiders running for the Democratic nomination for governor.

Patrick’s grass-roots campaign quickly caught fire, fueled by his freshness and personal magnetism. He trounced his Democratic opponents and then, after a general election campaign in which a fair amount of mud was slung at him, the Republican nominee.

Patrick’s reputation as a gifted orator has in a sense obscured the concrete record of achievement he left behind when he left office in 2015. It was his bad luck that, shortly after taking office in 2007, the national economy cratered—but his admirers point to the series of successes he and his Administration had during a period of national, and global, economic trauma. They included a Massachusetts economy that grew faster than the United States’ economy did seven years in a row, a reversal of the seven years in a row in which Massachusetts’ economy lagged the country that preceded his taking office.

Jobs grew in Massachusetts at a faster rate than they did in the country each year he was Governor, reversing a corresponding period that preceded his tenure, in which Massachusetts lagged the rest of the country. Balanced budgets, the highest bond ratings in Massachusetts history and an extremely strong state “rainy day fund” were among the reasons Patrick-watchers pointed to his “meat-and-potatoes” accomplishments as a solid basis for a presidential run.

Patrick made clear mid-way through his second term that he had no intention of running for anything, and no intention of accepting either a cabinet appointment or a position on the Supreme Court from his friend the President, and that he was determined to return to the private sector from whence he came. That is indeed what he has done, joining Bain Capital as a managing director while working quietly on a number of behind-the-scenes projects with non-profits. That, however, did not stop the speculation that he was on Hilary Clinton’s short-list for vice-president, a prospect Patrick never regarded as real.

Patrick genuinely likes the private sector and seems content to make his contributions to the community behind the scenes. It is far from clear that he will ever run for political office again, although he does not rule it out. But the Democratic Party is fundamentally riven between center-left and the MoveOn.org wing of the party and that particular division appears likely only to widen with time. The nation at large is much more bitterly divided than that, and the rhetoric from citizens and politicians alike has descended to poisonous levels not easily remembered. Deval Patrick’s blend of thoughtful calm and ability to take the long view is one that has much to recommend it, whatever he decides to do. 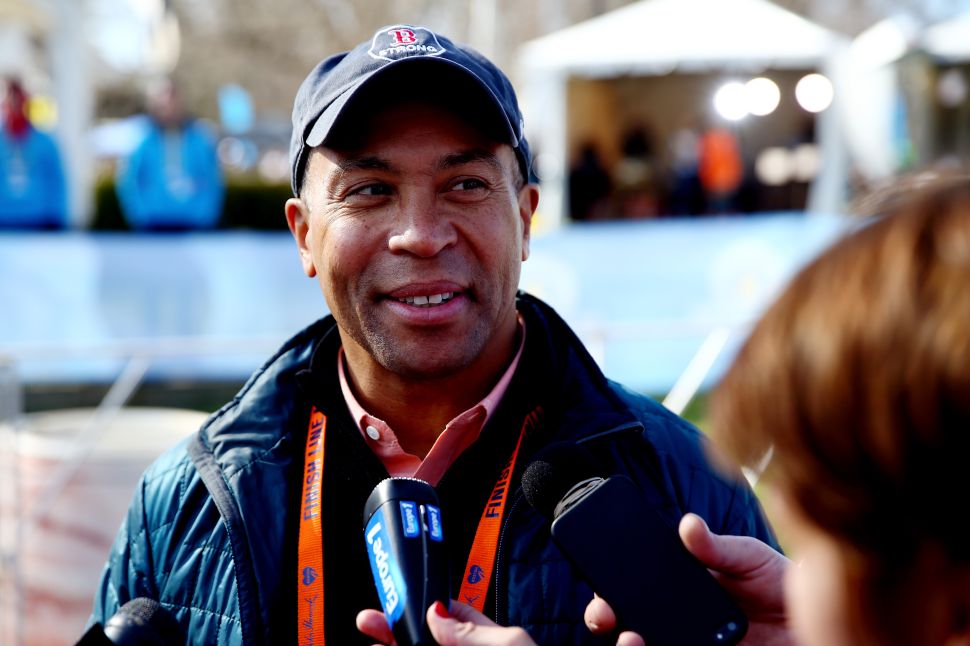