“Where are we going?” a woman on my local G train platform demanded of what looked to be her husband last Sunday, dripping with sweat and seeming annoyed. “A sculpture park,” he said. “In Queens.” The presumed wife just shook her head.

The G train, Queens, sculpture… all reasons you might not have been to Socrates Sculpture Park. But you really should go. For one, Central Park is really crowded. Also, there’s some very cool art to be seen, and only until August 28.

“We venture out there in terms of what’s safe,” John Hatfield, the executive director of SSP told me on a recent visit. He kinda means that literally. He’s explaining why the art in the installations he’s commissioned for the park’s 30th anniversary this year are different. Partly it’s the materials—plants, bees and trash are all used. But it’s also the ambition.

See, there are two ways one can appreciate the SSP. First, there’s a beautiful bowl of too many flowers to categorize that you can walk into. Done. Second, there’s the thinking behind that particular work—Concave Room for Bees by Meg Webster—and the seven other that accompany it here. “[The show] is a bridge between 1970’s Land Art and more pedagogically themed work from later,” Katie Denny Horowitz, the director of communications for SSP, tells me. As the brochure for the show, which is called “Landmark,” says, its “projects mark the land literally and symbolically, addressing the idea of place as intimately tied to social and ecological structures, to maintenance and stewardship, and to evolution over time.” Alright…academic, but interesting.

Other works you can view and interact with include Abigail Deville’s Half Moon, a sort of ghost ship, if you will, that pays homage to the Native American history in the region and the park’s history as a slip.

“Abigail loves trash,” says Jess Wilcox, the Director of Exhibitions at the park, referring to what might more pretentiously be called the “found materials” used in Half Moon. The “ship” kind of looks like it was an invisible boat sailing through the air until it was caught on a tree, and then detritus built up on it, allowing the outline of a ship to form. The piece can be touched, and has probably been modified, but that’s part of the idea. The tree is growing around it.

Pushing past Half Moon, you come to a tall, transparent encasement mounted in an old metal piano. This work involved transporting 60,000 bees that inhabit the encasement to the park and is called Fugue in B Flat (get it?). The bees were shipped in, and only about 30,000 remain, the staff estimated (bees just do their own thing, apparently).

“The Queen arrived in a box of candy,” Horowitz said. While the bees make honey, which they have when I visited, they also move the piano strings, creating a sound installation.

You assume that at least one child has been stung and a couple lawsuits settled, but actually the bees aren’t interested in humans, it seems, and the Park’s spokespeople say there haven’t been any incidents.

Did you know that bees are democratic? They are. The scout bees “dance” in different directions to indicate where they think new hives should be located, Wilcox explained. When they all dance in the same direction, that’s where they move the hive. Did you know that bees all dance parallel to the earth’s axis? Maybe you did. I didn’t. The worker bees will also work themselves to death for their Queen—a particularly juicy fact, given their apparent collective intelligence and democracy.

But back to Concave Room…. The intricately mixed plots of different flowers and herbs encircle a center seating area, creating a sort of half dome of nature. It’s probably the most ambitious piece here and was also the most expensive to produce, because, as Hatfield and I grouse about, dirt isn’t actually cheap (well, sod, specifically). Hatfield says the work is “a sort of microcosm of the park itself,” as it houses a small society of bugs, bees, flora and fauna that have been ended up here for reasons both random and purposeful. “It’s a constant effort of stewardship,” he says, but it, like many of the other works in “Landmark,” won’t be removed or destroyed after the exhibit closes. “Many works [in the exhibit] were sort of a gift to the park,” he said, and will be left to their own (or nature’s) devices after the show is over.

SSP also currently sports a provocative Hank Willis Thomas, movies about climate change you can view in a shipping container and a series of bumper stickers called Honk if U Love Socrates Sculpture Park, which adorns the park’s dirt grooming machine and which “undercut the seriousness of this prototypical emblem of masculinity,” according to the literature.

So con your spouse into a visit and get on the train, the ferry, whatever, and soon. For the record, this is the first time I’ve said that about any art installation—let alone one off the G train. 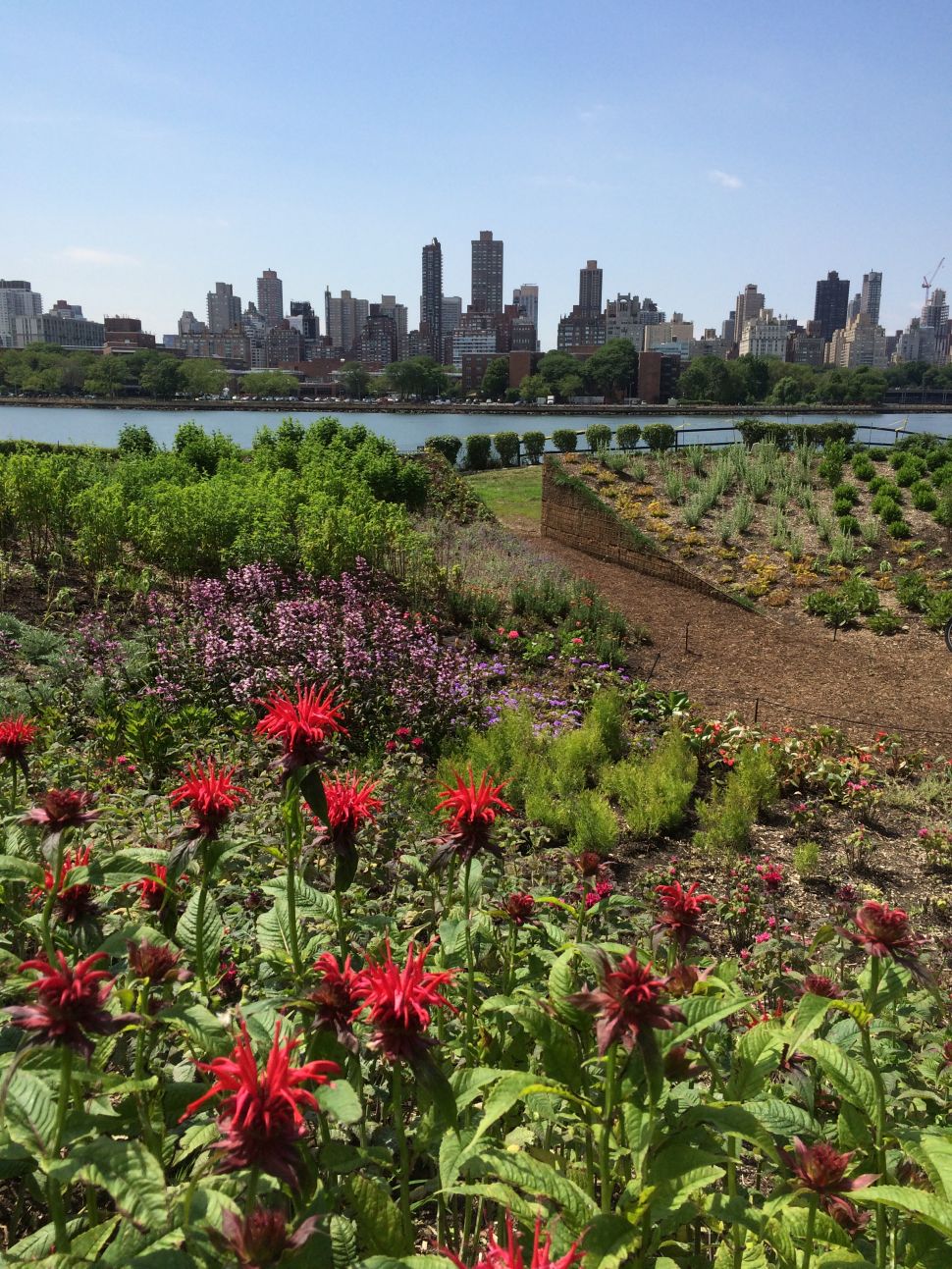