A little over four light years away from Earth, scientists have found solid evidence pointing to a potentially habitable world orbiting the nearest star to our solar system—Proxima Centauri. The planet, dubbed Proxima B, is larger than Earth and may have the ideal temperature to allow the presence of liquid —a primary source for the nurturing of all known forms of life.

According to a paper published in the journal Nature by a team of European researchers who made the discovery, Proxima B is about 1.3 times the size of Earth and is now the closest exoplanet—a planet that exists outside of our solar system—ever discovered. Proxima B is thought to have that ideal temperature because it sits in its host star’s ‘goldilocks’ zone—the sweet spot in orbit that promotes a life-sustaining environment.

Proxima Centauri was discovered in 1915 and is categorized as a low-mass red dwarf. It’s about one-seventh the size of our Sun and about one-eighth its total mass. But it’s far denser by a magnitude of 40. Our nearest neighboring star’s cosmic address is in the constellation Centaurus but it cannot be viewed with the naked eye.

The rigorous search for a planet around Proxima Centauri was the brainchild of Guillem Anglada-Escudé of the Queen Mary University of London. Anglada-Escudé launched the Pale Red Dot campaign—an initiative that dared to ask “are there Earth-like planets around the nearest stars?” The project’s namesake is inspired by Carl Sagan’s Pale Blue Dot philosophy and a photograph of the same name taken by the Voyager 1 spacecraft as it ventured out beyond our solar system and into interstellar space.

The monumental discovery was the result of efforts lead by the European Southern Observatory and included collaboration from astronomers and researchers from across the globe. The existence of Proxima Centauri completely changes the narrative of what we know about our local galactic neighborhood.

Sure, we know there are billions of stars out there. Finding exoplanets is far more difficult than finding a brightly shining star, but finding a planet with the features of a habitable world? Like winning the lottery. Even more unprecedented? Finding a habitable world around the closest star to ours. It’s a game changer.

Telescopes around the world worked in concert with HARPS to detect extremely small vibrations that indicated a tug of war between Proxima Centauri and well, something. That barely-detectable “back and forth” being experienced by the star can only be from one thing: the gravitational pull of a sizeable nearby planet.

“The first hints of a possible planet were spotted back in 2013, but the detection was not convincing,” said Guillem Anglada-Escudé in a public statement. “Since then we have worked hard to get further observations off the ground with help from ESO and others. The recent Pale Red Dot campaign has been about two years in the planning.” The “Red Dot” refers to the potential reflection of light emitted from Proxima Centauri onto a possible nearby world.

Using the measurements by HARPS and the supplemental data from partnering telescopes, researchers made a startling observation. Proxima Centauri was moving in our solar system’s direction at a rate of 5 kilometers per hour or average human walking speed. Then, the cool red dwarf star would reverse its course in the opposite direction. This is the “wobble” scientists were looking for and exactly the phenomenon HARPS was designed to detect by measuring light emitted by the star.

This routine repeated itself every 11.5 days indicating that whatever body was causing the gravitational distortion, was orbiting the star at that rate. Proxima B’s year is 11.5 days long and that means it’s relatively close to its host star. But how could life survive on a planet so much closer—about 7 million kilometers to be exact—to its star than our own world is to the Sun? Because Proxima Centauri is much dimmer and cooler.

“We are a team of astronomers running a campaign called the Pale Red Dot. We have found definitive evidence of a planet in orbit around the closest star to Earth, besides the Sun,” explained the team of researchers behind the discovery in a Reddit AMA. “The planet we’ve discovered is now called Proxima B and this makes it the closest exoplanet to us and therefore the main target should we ever develop the necessary technologies to travel to a planet outside the Solar System.”

Proxima B is 4.2 light years away from Earth. A light year measures the time it would take for light to travel in the vacuum of space in a single calendar year—about 6 trillion miles. So that puts this new, potentially habitable world about 25.2 trillion miles away. If we managed to build a spacecraft that could travel at the speed of light—it’s just a 4 year journey.

Legendary astrophysicist Kip Thorne told the Observer that he believes humanity will achieve Interstellar travel in no less than three to four centuries given our rate of technological development. “There are ideas for how you might do it, generally involving putting people in space colonies that last for generations, he said. “There are propulsion ideas that people have had that make me think it will be achieved by human beings in three of four centuries.”

We may never see the sunrise from Proxima B in our lifetimes, but your descendents have a good shot. 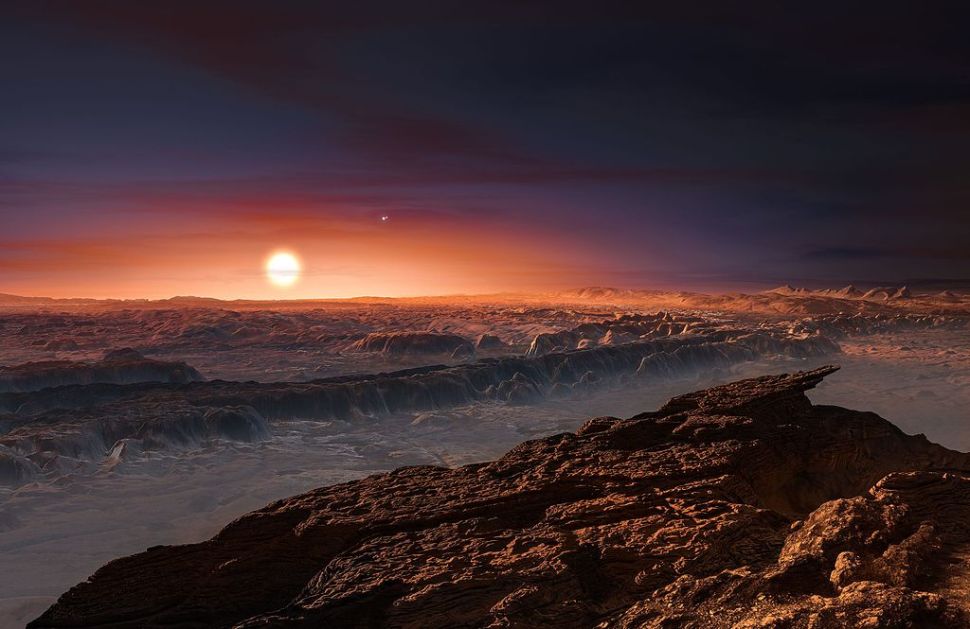