I’ve never seen a show fail as spectacularly as Preacher did in its Season One finale. I mean that in every sense of the phrase, honestly. As is the show’s custom, “Call and Response” went as far as it could possibly go, then pushed even farther. Graphic violence of virtually every variety, narrative zig-zags and head-fakes and dead-ends that would make Lost go “now hold the phone,” gross-out moments as stomach-churning as a basic-cable show can get, more tragically hip music cues than a mid-‘90s Miramax movie soundtrack, a complete and total abandonment of taste, decorum, or even just the sensible fear of being corny as hell: Preacher has always been willing to go for it, and went for it the finale did. It just so happens to have gone for the goddamn face of a cliff. It was spectacular, yes. It was also a failure. A complete, total, spectacular failure.

And as I’ve said before, something about that breaks my fucking heart. Let’s start with all the warm and likable acting involved, regardless of how seedy and shitty the characters attached to those acting may be: Dominic Cooper as Jesse Custer, Joe Gilgun as Cassidy, Lucy Griffiths as Emily, Ian Coletti as Eugene, W. Earl Brown as Sheriff Root, Anatol Yusef and Tom Brooke as Fiore and DeBlanc…hell, even Jackie Earle Haley manages to flesh out cartoonish Texas shitkicker antagonist Odin Quincannon by the end. Through no fault of her own, Ruth Negga is undone as Tulip O’Hare by one-note “badass” writing — the big humanizing twist reveal we get in this episode is that she suffered one of those magical “uh oh the pregnant woman got really upset so they lost the baby” pregnancies that happen waaaaaaaay more frequently on television shows written primarily by men than they do in real life — but it’s conceivable the creators could lay off the clichés and give her material commensurate with her emotional intensity and talent. But in the end she’s no better or worse off than everyone else: a suite of fine performances, wasted on a skin-deep rehash of dorm-room religious jaw-jaw, Sam Raimi ultraviolence, and exploitation of small-town misery.

The weird thing is that despite all the beatings, shootings, drownings of prostitutes in pools of methane waste, white men dressed up in racist Native American costumes, Confederate reenactors with portraits of Nathan Bedford Forrest on their kitchen walls, kind-hearted Christian single mothers who murder their fuckbuddies for reasons unknown, and so on, it didn’t really feel exploitative until this episode. (Okay, the thing with Emily feeding Miles to Cassidy was pretty bad, but you get my drift.) This started early, when Tulip shows up at Jesse’s unlikely hideout (the home of BDSM/South Will Rise Again enthusiast Donnie and his doting wife, who are suddenly the Preacher’s biggest fans, because…uh…) with their old partner Carlos in her trunk, demanding the Preacher kill him to avenge that magic miscarriage. Not sixty seconds after he acquiesces, she totally changes her mind, because apparently when it comes to murdering someone in cold blood for the woman you love “it’s the thought that counts.” It seems they’ll let the man go…

…but instead, after arming him to make it a fair fight, they beat him to within an inch of his life, allowing him to stagger off looking like he’d just been tortured for months. Our heroes! Perhaps because the violence on the show has always been either overtly comical and unrealistic or waged between members of the same community, it’s never given me the Trumpist heebie-jeebies the way the unreconstructed revanchism of the Walking Dead franchise has done. This, by contrast, was supposed to be a “fuck yeah!” moment, complete with Johnny Cash’s cover of Depeche Mode’s “Personal Jesus” on the soundtrack, and its sole selling point was the inflicting of suffering on a person who “deserved” it. It’s gross.

From there, it gets worse. After Jesse’s attempt to force God to answer his congregation’s questions succeeds in confirming the existence of the supernatural but fails in confirming the existence of God Himself (and hoo boy, more on this later), the townsfolk go nuts in the absolute shittiest way possible. After Emily starts playing “96 Tears” by ? and the Mysterians on the church organ, as one does when one’s world has completely been turned inside out, Odin Quincannon begins a riot in the church, tearing down the cross. The feuding mascots hang themselves one next to the other, in costume of course, confirming that their lives and conflict were a punchline and nothing more. The bus driver whom Jesse had brainwashed into forgetting the child he’d intended to target for molestation is murdered by a half-dozen giggling schoolgirls. The mother of the comatose girl whom Eugene shot before trying and failing to kill himself smothers her with a pillow while her little brother gleefully takes a selfie with the DIY euthanasia in the background. Emily, who’d been devoted to God seemingly her whole life until she radically reevaluated things when she decided to feed her lover to the undead or something, tells her dumbstruck children they never needed God anyway. Quincannon takes his dead daughter’s snowsuit, fills it with ground beef, and tearfully cradles this meat-baby in his arms to replace the child he lost. And the power-company employee who monitors what we now learn is the pressure level in the town’s “electro-methane reactor” allows the prostitute he hired to fuck him at work since his wife isn’t giving him any to try, and fail, to shut down a leak — ass hanging out, ball gag in her mouth, the whole nine. All of this happens to a slowed-down choral rendition of “No Rain” by Blind Melon, for some fucking reason. The reactor then explodes, destroying the town and killing every single character on the show except Tulip, Cassidy, and Jesse, who went to the diner down the road to begin their cool-guy roadtrip to find God and “kick His ass” while “Let It Bleed” by the Rolling Stones plays in the background.

In this one sequence, the show appears determined to confirm every single suspicion I ever had about it. Faith, and the loss of faith, is a joke. Violence is a joke. The death of one’s children is a joke. The economic and social collapse of small towns is a joke. The use of loaded racist Southern iconography is a joke. The fact that we just spent ten episodes getting to know characters who were blown to smithereens by a small nuclear warhead’s worth of explosive cow shit is a joke. Yes, Preacher took all these jokes to the limit, but even “The Aristocrats” is still just a fucking joke in the end.

This is all so noxious that it makes other elements, egregious though they may be, look relatively benign. When “God” appears, for example, he’s a bearded old white man with unruly hair on a throne, like the avatar for the awful twitter account The Tweet of God. This can work if you’re an artist on the level of, say, Robert Crumb, and you’re drawing the God of Genesis this way in your graphic-novel adaptation of the Bible’s first book in order to comment on cultural perceptions of the deity. (And because you can draw the shit out of old bearded dudes.) No one involved here is R. Crumb. Even if, as is the case, this “God” is an impostor, a set-up by the panicked angels to cover up for the fact that God has gone missing and no one knows where He is, he still has to be entertaining, if not legitimately compelling, for as long as he’s on screen. He’s on screen for a long-ass time, and the joke wears thing way before Jesse sees through it.

What about the other visitors from beyond? No better, I’m afraid. Fiore returns on the bus from hell (dropping him off at that same weird field of square stone blocks we saw last week, which Breaking Bad’s disappearance expert used as his pick-up location), alone. This means that DeBlanc, the angel he loved, was indeed permanently killed last week—in the very same episode where we learned they were in love to begin with. Why bother, for Christ’s sake?

And his killer? The mass-murdering cowboy that fans of the comic know is called the Saint of Killers (though he’s never referred to as such in the show)? The guy we’ve built up to all season and whose suffering and crimes we spent minute after painful minute watching and re-watching last week? He shows up in the final seconds, killing that seraph who Jesse, Cassidy, DeBlanc, and Fiore had defeated in the hotel room (remember how she came back a couple weeks ago after the Sheriff mercy-killed her? The show sure seemed to have forgotten, since she never even approached Jesse at all) but who miraculously survived the blast that killed everyone else in town. Why? Who the hell even knows. To be badass, I guess? To end the season by murdering a stranger, then growling the word “Preacher” before things cut to black? To waste everyone’s time?

Another show, perhaps, could have made the killer’s much-ado-about-nothing buildup feel audacious rather than superfluous. Same with nuking the setting and much of the cast. Same with turning the town into a hyperviolent hellhole. Same with treating God like The Wizard of Oz. This show simply couldn’t. Like Jesse and his grand plan to call God to account, Preacher gave us something we’d never seen before. Unfortunately, that something sucked. 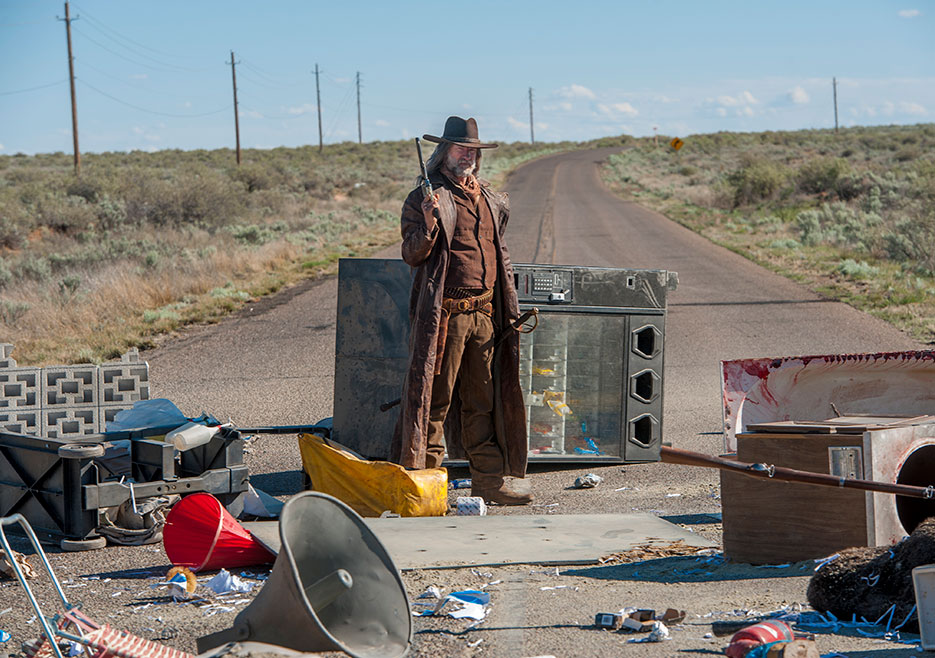