Rock singer, Broadway actor, and television star Reeve Carney has the slightly uncanny look of an alabaster sculpture in the flesh. It’s not surprising in the least he was cast as the eternally young Dorian Gray on Showtime’s Penny Dreadful, a character who necessitates an actor with a face worth selling your soul to the devil for (unlike Dorian Gray the show wasn’t immortal; it aired its final episode June 19.)

He’s made a name for himself as a sinewy, Tim Burton-style sex icon—slightly tubercular, very gothic, a rock star for the post-My Chemical Romance set who prefer East Village thrift shops and vinyl to Hot Topic and hair dye. Carney catapulted to mainstream popularity as Taylor Swift’s bad-boy love interest in the music video for “I Knew You Were Trouble.” Compared to the boys Miss Swift normally plays against (all-American, small town homecoming king, veteran with a heart of gold, etc.), Carney was a marked contrast, with an aesthetic in the video that could be described as “art-school drop out who might live in his car, and who also might do heroin ironically.”

Even as boy-next-door Peter Parker in Broadway’s favorite punch line, Spider-Man: Turn Off the Dark , Carney sung the rock score with a gritty edge, a departure from the nerdier, more earnest version of the web-slinger played by Tobey McGuire (can Tobey McGuire ever play a role that’s not nerdy and earnest?)

And now Carney continues his streak of taking over iconic roles as Riff Raff in FOX’s Rocky Horror Picture Show (filmed live and airing on October 20, 2016). Whereas Richard O’Brien’s iteration was bald, with stringy blonde hair hanging from his temples, Carney’s has a full, long dark head of hair, nail polish, and a skinny scarf, like if Stephen Tyler had gone through a Myspace phase.

It’s hard to imagine a show that’s a better fit for Carney than Rocky Horror: dark, a little campy, a little sexy, and with a cult following that’s about to get a whole lot bigger.

Between Dorian Gray, Spider-Man, Riff Raff and Taylor Swift love interest, you’ve played a lot of characters with an established version in the audience’s mind. How do you approach that?

I love a good challenge; so for me, the great thing is you have so much to base it off of already. I mean obviously there are certain things people might have in their minds…

I think it is a great honor and a great challenge to have the opportunity to play these roles that have been so beloved for so many years. Riff Raff in particular—with Richard O’Brien being the creator of Rocky Horror, and composing the songs, writing the script—it is slightly intimidating I’d say. But I enjoy throwing myself into those situations.

Were you always a Rocky Horror fan?

I wouldn’t put myself in the category of someone who—like, I had never seen a shadowcast performance until I got the part. And then I made a point of doing that. But I had seen clips of it early on, different portions of it as a teenager. And I grew up around the corner from the Waverly Theater in New York City [where the first shadocast performances took place]. Because of that, I walked by all the time, and I would see the poster for it. And it was equal parts terrifying and enticing and intriguing? Which I think sort of describes Rocky Horror well.

So what was the experience like being in a Taylor Swift music video?

I think I definitely got a lot more Twitter followers because of it. She was so kind to me. I mean, she’s just one of the most skillful artists out there in the popular music world. It was just a pleasure to be a part of that video.

You had a really hipster look—is that your vibe in real life?

Yeah definitely! I don’t always wear a hat, but actually most of the clothes were my own clothes. The hat was not mine though. That was a cool hat. That wasn’t mine.

No way. Those were your clothes?

What did I wear? The jeans… the suspenders, those are mine. I got those in the east village. I wear those all the time.

No. And that’s the thing. I think tattoos look awesome, but I am not the type of personality to commit to something of that nature. I can’t imagine myself committing to something ink-related. I think [not getting tattoos] is my form of rebellion because I am a rock and roll musician, it seems a little bit cliché for me to have tattoos. But I thought it was cool! They looked cool.

You were also the lead in Spider-Man: Turn Off the Dark, which got a lot of critical attention. What was that experience like from the inside?

There was some negative press, but it seem that it did engage the audience in a different type of way, and we just had to focus on the work and getting the show up and running and working out the kinks that were causing some of those issues. So I think just keeping our heads down, staying focused and clear—that’s what it felt like from the inside. “What are the new lines today? What’s the new scene? What are we going to do?”

Needing so many rewrites and tweaks, yeah, you just must have needed to focus on the show itself.

It was wonderful though. I do love a great challenge. I just love doing something I’ve never done before, and so Spider-Man to me was an opportunity for that certainly. Like, wow. I’ve never flown around a theater. I don’t know a lot of people who have, but I think most people, if given the chance, would take it. I did think about it towards the last six months of my run there, I thought, man, I’m really going to miss this. Where else can you do this? It’s like riding a roller coaster with no roller coaster.

But I felt that honestly with Rocky Horror as well. For me, I never really had an opportunity to play a comedic character. And it’s opened my eyes to something I didn’t realize I had a love for. I said to the guys when we were doing it, “I wish we could do this ten times in a row.” It was that much fun. I know that’s probably not possible, and doesn’t make sense to do the same film ten times in a row with the same actors.

Yeah! I really would like to keep doing as many things as I can that I enjoy, and keeping things fresh and interesting for myself. But I love it all, and I feel very fortunate to have had the opportunities to explore artistically in a public manner. 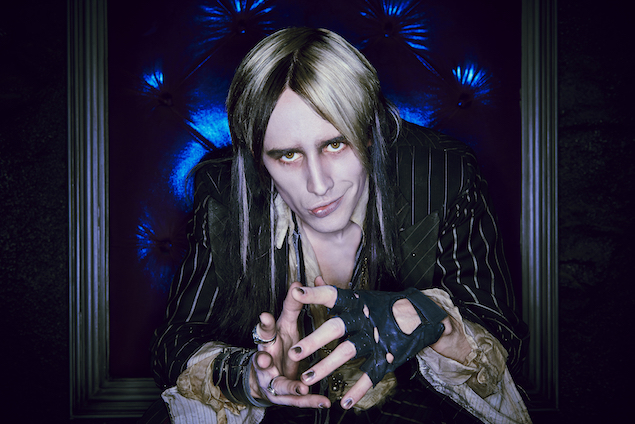