If there is one constant in American politics, it is the consistent failure of the progressive far left to get out of its own way. Collectively comprising the suicide wing of American liberalism, progressives on the farthest reaches of the far left have a long tradition of shooting themselves in the collective foot at the worst possible times.

This tendency of unrealistic far lefties to desert the Democratic Party for—pun definitely intended—greener pastures is once again a matter of concern for Democrats as Hillary Clinton watches Donald Trump melt down. With victory conceivably in her grasp, perhaps the only thing that can derail Clinton’s long march to the Oval Office would be a strong showing by the Green Party and its nominee, Jill Stein.

Democrats are right to be concerned, because we’ve seen this movie before. In the wild, razor-close 2000 presidential election, the decisive factor in Democrat Al Gore’s controversial defeat was the strong showing by longtime consumer advocate Ralph Nader, who won 2.74 percent of the national vote and arguably cost Gore at least two states that would have made him president: Florida and New Hampshire.

To this day, there are Nader voters who argue passionately that the candidate they supported did not cost Gore the election. They claim adamantly that Republican shenanigans in Florida and/or the conservative bias of the U.S. Supreme Court denied Gore a victory in that pivotal state and that their man had nothing to do with it.

Whether you accept these arguments or not, there is another undeniable fact that renders them irrelevant: Nader won 22,198 votes in New Hampshire, a state Gore lost by 7,211 votes. Had just one-third of Nader’s New Hampshire voters chosen Gore instead, the Democrat would have captured the Granite State’s four electoral votes and taken the White House with exactly the 270 electors required for victory. The mess in Florida would have gone down in history as an interesting but irrelevant footnote.

Instead, Nader’s voters deprived Gore of New Hampshire’s electors, and he finished with 266. The 2000 election marks the only time a Democratic presidential candidate has failed to carry New Hampshire in the last six elections.

While you were patting yourselves on the back for making a ‘statement,’ progressivism lost a generation.

Congratulations, New Hampshire far lefties. By voting for Ralph Nader in 2000, you got precisely the opposite of everything you wanted: a Republican presidency; continued conservative control of the Supreme Court, culminating in Citizens United and the gutting of the Voting Rights Act, to name just two of the recent court decisions liberals despise the most; and the war in Iraq, with all its devastating consequences in blood and treasure. There’s a word of fairly recent coinage that perfectly describes your choice 16 years ago: Derp. While you were patting yourselves on the back for making a “statement,” progressivism lost a generation.

Only now does the left have an opportunity to take control of the Supreme Court that it could have had more than a decade ago. The same opportunity could be lost this year, too, if this election turns out to be close and enough far-left progressives in key states vote Green instead of Democratic.

The Nader debacle of 2000 is only Exhibit A of the far left’s tendency to undercut the greater progressive cause at extremely inconvenient moments. We have also seen ultra-progressives stop their own cause in its tracks at other pivotal points in our history. For example, there was the midterm election in 2010, in which a number of progressives—irked by the fact that President Obama couldn’t give them every present on their Christmas list in less than two years—sat on their hands and withheld their votes.

While Republican gains were inevitable in 2010—the GOP had lost so many seats in Congress in 2006 and 2008 that it really had nowhere to go but up—the sniping from the far left may well have been the difference between Democrats holding the House of Representatives and losing it. Lack of enthusiasm among the party’s base crashed Democratic turnout and helped the Republicans pick up a staggering 63 seats, flipping the chamber from a 257-178 Democratic majority to a 241-194 GOP advantage. Had Democrats held their House losses to more reasonable levels, say 30 seats, they would have maintained control of the chamber, preventing or at least delaying the partisan gridlock that has bottled up most of the progressive legislative agenda for the last six years.

Among the Democrats’ Senate losses in 2010 was the flipping of Obama’s former Senate seat into the red column, as Republican Mark Kirk edged Democrat Alexi Giannoulias by 59,220 votes statewide. One crucial statistic from that race is the nearly 117,914 votes won by the Green Party’s LeAlan Jones. Had slightly more than half (50.3 percent) of Jones’ votes gone instead to Giannoulias, Democrats would have held that seat.

Some of the most passionate progressives often fail to understand that progress is a process.

There are other examples of how far-left petulance has helped usher in conservative control and stopped the advance of progressivism in its tracks. The chaos at the 1968 Democratic Convention in Chicago—for which overzealous policing has rightly been blamed, but for which far left agitators also bear their share of responsibility—did catastrophic damage to Democratic nominee Hubert Humphrey’s campaign and helped send Richard Nixon to the White House. This was the first of five victories over the next six elections for the GOP, enabling conservatives to take control of the Supreme Court and begin rolling back progressive laws and court decisions dating back to the New Deal.

The failure of a significant portion of the progressive left to understand that a united front is needed to advance their treasured causes is maddening to Democrats. In a nation in which fewer than one-third of those surveyed identify themselves as liberals, it remains necessary for Democrats to win moderates to attain majorities in elections. But the suicide wing of the progressive left consistently complicates matters by threatening to withhold its votes when Democrats make the necessary compromises to win. And if Democrats cannot win, progressives cannot advance their agenda. It’s that simple.

Some of the most passionate progressives often fail to understand that progress is a process. There’s no silver bullet, and it takes many elections over a sustained period of years to build the kind of momentum and majorities for the changes they want to see. By shooting the Democratic Party in the back at pivotal moments, such as the 1968 and 2000 presidential elections and the 2010 midterms, they have continually derailed their own train. But then, it does seem that the farthest reaches of the far left are far more comfortable when they can “fight the power” rather than fight for power.

And this, more than anything else, is what keeps Democrats awake at night. At a moment in time when Trump is doing himself significant damage and a Clinton victory is in sight, they know it can all be undone—not by the Republicans, who are themselves coming unglued right now, but by their own side.

No loss is more tragic than one brought about by friendly fire. The far left would do well to take a lesson from history, and not burn its own house down yet again by voting Green in November. 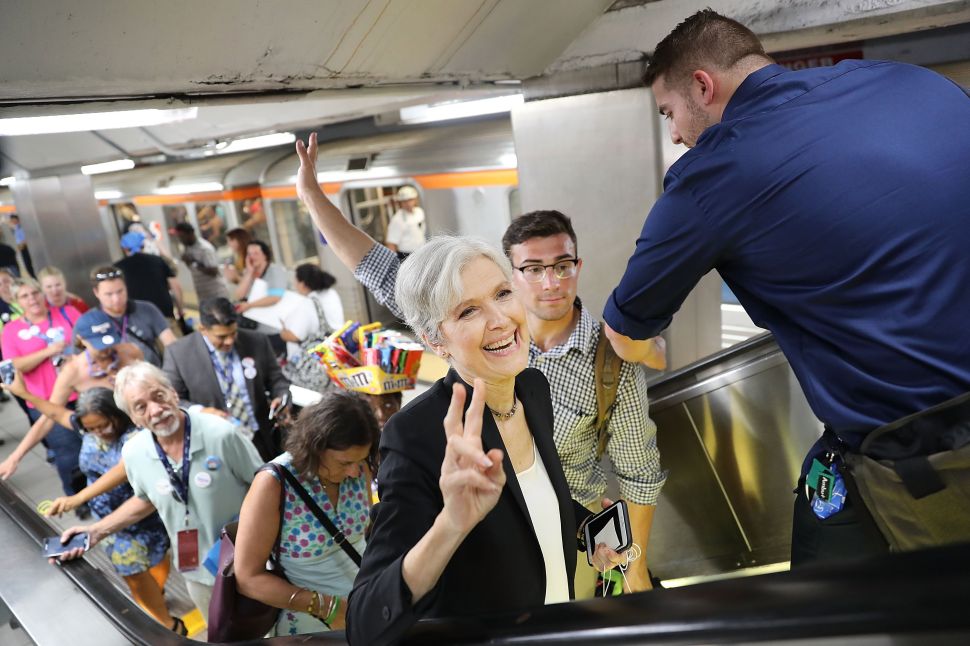