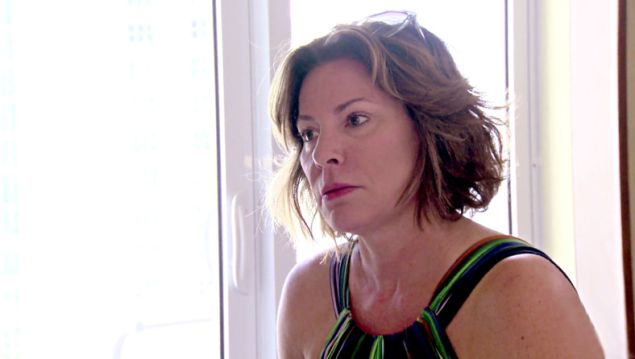 After a week off from this crazy show, we begin with the cliffhanger we left off with: Bethenny has physical evidence that Lu’s Tom is not faithful. Ramona continued to freak out, pacing the room, trying to contain her delight? anger? It was hard to tell honestly. But she was in full Ramonacoaster mode. And, unable to contain herself, she abruptly exited the room, leaving Bethenny and Carole to huddle over the damning picture stored on Bethenny’s phone. Which, for some reason, they don’t even show on camera.

Later that evening, the women head out to dinner. Bethenny, Ramona, and Sonja head to the restaurant. And, while sitting on a Restoration Hardware couch that both Bethenny and Ramona own, sipping cocktails as they awaited the rest of the ladies, the story of Tom and Sonja (you know, BL) gets even further twisted: Bethenny found out that Sonja was seeing Tom Thanksgiving time, while Lu was still playing out her Grey Gardens fantasy staying in Sonja’s crumbling manor. And, it gets juicier. Sonja was supposed to meet his mother the following Friday. I don’t know how true that actually is. Meeting the parents indicates that their relationship was serious, and Sonja, up until this point, has been very clear that their relationship was mostly casual. I believe that Sonja exaggerated the depth of the relationship as her jealousy of Luann’s relationship grew.

Bethenny looked horrified, and it didn’t help that the rest of the crew sauntered in over an hour late. The tardiness only served to deepen Bethenny’s stress and anxiety over holding on to such incriminating information. And so once the rest of the crew started to arrive, Bethenny yelled at them for being so inconsiderate. Specifically, at Carole, the source of their lateness, as she had an unfortunate wardrobe mishap. Bethenny did not hold back just because they happen to be the best of friends.

But it was still jarring to see Bethenny be so hard on Carole. And while I believe she overreacted because of the Tom photos and the stress in having to see Luann again, I would wager that there was a twinge of resentment that Carole was hanging out with the “other” clique. It was interesting to see Carole make such a concerted effort to hang out with Lu, Dorinda and Jules. And her efforts did not go unnoticed. The next day, at the sandbar, while Carole went off in some guy’s boat to get food, Lu marveled how wonderful Carole was to be around when she wasn’t attached to the hip with toxic Bethenny. I don’t think she was more “pleasant” than normal, she was just quiet and amendable. Something that Dorinda, the trip planner appreciated.

See, Dorinda felt like a jilted lover, because Bethenny, Sonja and Ramona all chose to do a separate activity, instead of sticking to her plan, because it was her trip. At least the rest of the ladies were compliant and did her bidding. The night before, Dorinda had announced her plans to take the women on a boat to Miami’s sandbar. Ramona responded like she tends to do: like a child. Whining, complaining, kvetching; I mean, my five year-old complains less than that. And Dorinda, who has been on a power trip to become the queen of RHONYC for the last few episodes, did not respond well. Dorinda, who clearly overdid it on the pre-gaming, slurred and generally made no sense as she reprimanded Ramona. But I did love that the Bravo producers “translated” what Dorinda was saying by putting nonsense captions on the screen.

Other than Bethenny’s outburst and Dorinda’s slurtastic drunken rant, not much happened at that dinner. Bethenny predictably turned in early, but unpredictably, so did Sonja. Normally the party queen, I think the stress of seeing Luann so happy with a man, when she herself was not just bereft of true love, but of lovers, was too much for her (something I kind of doubt, but who am I to deny someone’s sense of overwhelming loneliness). So, as the rest of the women headed out clubbing, Bethenny and Sonja headed to Bethenny’s room, to (predictably) discuss Tom and Bethenny’s incriminating proof of his indiscretion.

Sonja suggested that they call him. Meanwhile, the rest of the women were having the time of their lives. Carole was dancing with some young, chiseled specimen of hotness and Jules got a little too intimate with a trombone. In the midst of this whirlwind of fun, Lu decided to call Tom. The producers cut back and forth between Bethenny and Lu both trying to reach Tom. When he didn’t pick up for either of them, you couldn’t help but wonder if what Bethenny said was true, that he was totally banging someone else and that’s why he wasn’t picking up.

The next day, the women walked into the common room (or suite) for some breakfast, but it was Ramona, with her knowing smirk, and zombie-style, crazy-eyes, that really made an entrance. It was then that she told Dorinda that she would be able to attend her sandbar activity as she needed to rest. Dorinda was rightfully suspicious. Ramona was using the previous night’s festivities as a ruse to go to brunch at her favorite Miami spot, Bagatelle. And, as Dorinda realized that Sonja and Bethenny had decided to join her, she was pissed.

She tried to be a lady about it, proclaiming that she “resigned” herself that these women will do whatever the hell they want to do. But her resentment merely simmered just under the surface, expressing itself in passive-aggressive remarks about Bethenny, Sonja and Ramona’s behavior. Dorinda has tried so hard to crown herself “Queen Bee” of the NYC Housewife franchise. She shit-stirred (often, over incredibly stupid things so her efforts fell flat). She acted as the savior to both Bethenny and Sonja. She tried to host as many televised events as possible to get maximum screen time. She even wheedled her way into planning the annual, contractually obligated Real Housewife trip, in only her second season on this show. Her popularity and her reputation as the “voice of reason” last season certainly gave her the ego boost to do so.

And as her resentment and sense of self-importance bubbled to the surface, she lashed out at Ramona later that night at dinner, when the women all managed to come together again. Understandable, of course, but the way she talked down to Ramona showcased Dorinda’s own sense of superiority. A sense of superiority that, in my opinion, is unearned.

Bethenny managed to avoid a confrontation with Luann for most of the episode. From making sure to avoid sitting next to her at dinner, to avoiding going out to the sandbar with her; Bethenny put off talking to Luann until the last minute. Bethenny knew a confrontation was coming; she knew that her initial conversation with Luann was off-putting for Luann, that it made Luann feel uncomfortable.

Lu was upset by two things: Bethenny implying that her first marriage was somehow tainted by it being an open one, and Bethenny asking such personal questions about Tom. Throughout this episode, Lu kept changing her story over whether or not she had an open marriage (even denying it last episode), but, in the end she came clean, partially, saying that it was only an open marriage in its latter years, in an attempt to save it. I kind of believe that she agreed to it only to keep her marriage alive, but at the same time, I don’t think she hated it as much as she would like us to believe. Knowing what a barracuda she is when it comes to men, I doubt she truly hated that arrangement. I think what really bothered her was when her ex didn’t just sleep around, but had the audacity to fall in love.

And I think that’s why she has been so manic about her relationship with Tom. Tom is very similar to her ex – he’s rich and a womanizer. And it terrifies her that he could fall in love with someone else. That’s her biggest insecurity. She has no doubt that she can take any man she chooses, whether or not he’s with someone else. But she fears that someone else might try to steal her prize.

So when Bethenny finally dropped the bombshell that she has pictures of Tom with someone else, Lu broke down. She stormed out of the room, her throat tightening with emotion as she held up a hand to her face in disbelief. I’m not ruling out the possibility that it could have been an act, a form of melodramatic overreaction in the style of a soap opera, but I kind of believe her pain.

This whole episode she acted insecure and her excitement over her impeding nuptials seemed forced. And she wants so desperately to have true love in her life that she begged Bethenny not to tell her, not to show her the truth about Tom. And, with that, we again end this episode on a cliffhanger, a “To Be Continued” flashing across the screen. But it seems likely that Lu will retreat back into the comfort of her delusions and pretend that this never happened. 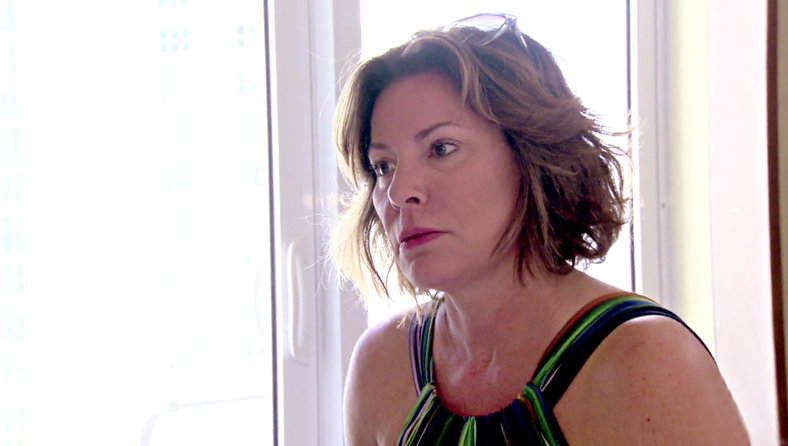