The 2016 Summer Olympics opened last night in Rio—a host city in a country beset with problems, determined in its opening ceremony to focus attention on the world at large. These past weeks we heard the stories of competitors and spectators traveling from far and wide to compete or witness contests in a city with deadly mosquitos and raw sewage in waterways—with venues not fully finished, comfortable accommodations scarce, and untested security from terrorist attack.

Some world-class athletes have boycotted these Games, most of the Russian team has been banned for state-sponsored cheating. What a mess! We long for the good old ancient days, when men competed purely for the love of it. The Olympic wreath of olive, the whole prize to the winner. Honor in victory, its own reward.

Some critics of these expensive but insufficient preparations for the 2016 Olympics call in the future for a fixed, permanent site, perhaps somewhere in the United States with its state of the art sports complexes, world class hotels and well established security. But how can the world come together unless the games rotate and span the globe?

The same site every four years does break with modern Olympic tradition, but then “tradition,” often requires us to forget our origins. If we determined to stay true to ancient tradition, men from the entire Greek world—women were barred as participants and spectators—would flock to the same spot: Olympia. Every four years, in one place, from 776 BC and for the next 1200 years without fail, the world’s greatest athletes ran and jumped and threw and fought against each other in contests with rules and judges declaring victory.

Ironically if we do determine to keep with ancient tradition and perpetuate the spirit of Olympia, our newly chosen Olympic spot would discomfort its visitors.  Over the centuries that followed the first Olympics, other athletic games emerged in other parts of Greece and Rome. Organizers attempted to lure top athletes to these other festivals with huge prizes or magnificent stadiums. But Olympia remained a consciously uncomfortable venue. No one could reserve seats because there were no seats.

Forty thousand spectators trekked to Olympia from the entire Greek world, stood or sat, unprotected on the bare ground or dried grass that covered sloping banks which ran along the track and field. Over the centuries, rich and powerful patrons would have gladly paid for a lavish, comfortable stadium. But the governing council in Olympia refused their offers. And for 1200 years, every four years, they kept the spectators standing or sitting on the ground.

Which brings us to security. We must be concerned about terrorism. Will some fanatical terrorist group attack these 2016 games as part of their declared war on the rest of human culture? Little doubt that they would if they could. Would a hostile power ever restrain itself and forfeit military advantage out of respect for the Olympic spirit that for a moment peacefully unites the world? Tradition says they will. History says they have.

‘You steel your heart and put up with it all, because you think that the spectacle makes it worthwhile.’

Wars did not entirely cease during the Olympics, but people gathered safely to participate and witness. Every four years, a few months before the ancient Olympics convened, heralds from Olympia spread throughout the Greek world, announcing the coming contest and proclaimed a “sacred truce.” From that moment—no matter what wars raged—all competitors, even if they were also great enemy warriors, and all spectators could travel to and from Olympia through hostile territories, unmolested.  No one would attack them, nor of course would they ever attack Olympia itself.

Sparta dominated the Olympics for centuries and once violated the sacred truce in a minor attack on a nearby part of the region. The Olympic council banned the Spartans from the 420BC Olympics. But Sparta’s collateral attack pales next to the terrorist massacre of the 1972 Israeli Olympic team. Those who planned and carried out the mass murder of competing athletes profaned the sanctity of peaceful competition, culture and play.

But they who planned the opening ceremony of the 2016 Olympics last night diverted us from a current concern with local terror to emphasize the global threat of climate change. Hope and gloom: “It’s ugly but it’s a flower. It broke through the asphalt—tedium disgust and hate,” intones the narrator in the opening ceremony’s visually stunning video, interspersed with a terrifying message: the world destroys itself. So in this year’s opening ceremony, insecurity went global.

And then came the march of nations. Athletes in costume and color paraded in clusters as separate cultures or nations—but all part of one world, proudly waved their flags. The march of nations made up the bulk of the opening. And when the American team paraded, led by Michael Phelps, the most decorated Olympic athlete in modern history, more than once you heard strains of “U.S.A, U.S.A” That refrain felt contemporary, but Americans chanted at the 1936 Olympics. And the ancients too took enormous pride in their city states, and by their victories honored their homeland.

Spectators by the millions adore the opening day’s pomp and ceremony. Some sport purists, however, may feel all this delays and disconnects us from competitive athletics that are the essence of the Olympics. For them, the Olympics really begin with the torch relay that ends by lighting the Olympic flame.

Adolph Hitler revived the dramatic entrance into the stadium and ascent of the stairs. We still squirm at classic images from this staged Nazi showcase as the torch bearer ascends the stairs of a packed stadium bedecked with Swastikas and flags from countries of the world. But we should also recall another parade of athletes besides a muddy makeshift outdoor court during that same ‘36 Olympics. There athletes from 22 countries dipped their flags in tribute to Dr. James Naismith, who invented basketball, which spread around the world and became an Olympic sport.

Those who object to all this the pomp and ceremony should also recall that twenty five hundred years earlier, the ancient Greeks, themselves, instituted a torch relay to begin the Olympics, more a ceremony than a competition, and never an official Olympic event. And in the 6th century BC, when the Olympic program reached its standard five days, only two of them featured actual athletic competitions. Sacrifices, ceremony and celebration filled the other three.

And finally, what about the missing—the Russian track and field and weightlifting teams whose state assisted cheating got them banished? Surely cheating destroys the true Olympic spirit of fair competition? Yes, no doubt, but again, tradition is the forgetting of origins. We know that Pierre de Courbetin led the revival of the modern Olympics in 1896. But who was the Ancient Olympics patron saint? Here myth and mystery mix. The Ancient Greeks widely credited either Herackles (Hercules) or more often Pelops with founding the Ancient Olympics in 776 BC.  What purity of spirit moved this young King Pelops to bequeath the world this gift?

Actually a passion to marry the beautiful Hippodameia seized Pelops, but the Oracle had prophesied to her father, King Oenomaus, that his son-in-law would kill him.  So the king determined his daughter should never marry, and demanded any suitor to compete in a chariot race. He’d give his daughter and her suitor a head start.

But if the King and his charioteer Myrtilus caught up with them, the King would spear the hapless suitor to death. Pelops recoiled at the heads of a dozen failed suitors before him, the King had nailed above his door. But Pelops had a plan. He bribed Myrtilus, Oenomaus’ charioteer, to remove the lynchpin of the king’s chariot and substitute one of wax. During the race the King’s wheel came off, he was thrown, tangled in the reins, and died.

So Pelops bribed the charioteer, killed the King, married his daughter, and seized the kingdom. And then, perhaps in part to expiate his sin but more likely to celebrate his victory, in 776 BC at Olympia, a site he now controlled, Pelops threw the first Olympic games of record. When the charioteer Myrtilus came to collect his promised reward, Pelops had him drowned. This account of the ancient Olympic founder makes Pelops an odd choice as the anti-cheat. But from the start, the Olympics has always forbidden cheating. Before the games began, every athlete, judge and trainer solemnly swore an oath to Zeus that they would not cheat.

With all their faults and traditions, the opening ceremonies in Rio, now, as in ancient times, appeal to our transcendent cosmopolitan instincts. As the ceremonies closed last night, watching the torch light vastly amplified in slowly twirling shimmering reflections, greatly amplifies us as well. The Olympics connects us to our dreams and memories; to an ideal sense of self and potential we once had but never realized or have not yet tested. These great athletes in their prime can lift us vicariously to heights we cannot reach on our own, make us glow as we watch beautiful young men and women smile and wave, joyously preparing tomorrow to fiercely contest, drive themselves to exhaustion, display the characteristic physical excellences of each particular sport.

Men and women who have trained and practiced and honed their bodies will produce dramatic stories of courage. We will witness beauty, strength, heartbreak and triumph.

“Don’t you get baked by the sun there? Don’t you get crushed by the crowds? Don’t you find it impossible to get a bath? Don’t you get soaked when it rains?” asked the ancient Greek Epictetus. “Don’t you have an overdose of noise,” (and adds) “of shouting and of exasperation? Yet you steel your heart and put up with it all, because you think that the spectacle makes it worthwhile.”

SEE ALSO: WHY WE SET ASIDE OUR DIFFERENCES TO RUN, JUMP, THROW AND FIGHT

Robert Blecker, a professor at New York Law School, will be covering the Olympics for the Observer through a lens of culture and sport. 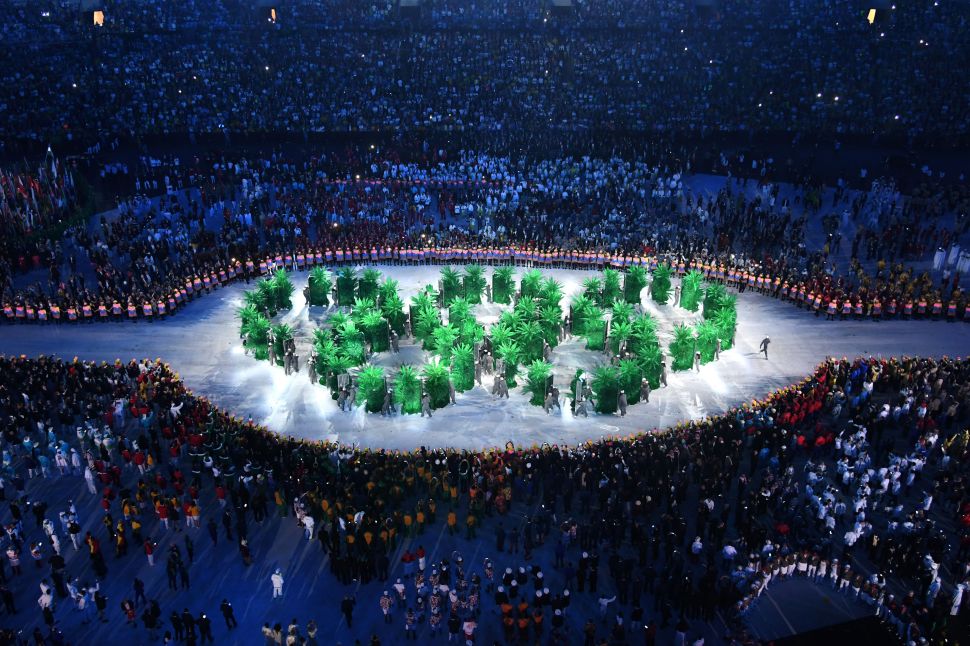