Mr. Robot Season 2 has been seven episodes of misery and counting. Creator, head writer, showrunner, director and overall auteur Sam Esmail met the audience’s eager anticipation with a bracingly pessimistic kickoff, in which all the grandiose schemes and dreams of the cast’s hacktivist core came to nothing. The shocking twists and tense techno-thriller sequences that kept viewers riveted were almost entirely replaced by the kind of morose haze that main character Elliot Alderson used to take morphine to alleviate. He and his cronies in the underground group “fsociety” successfully struck a blow at the sinister “Evil Corp,” alright—but look where it landed them all.

Elliot, the architect of the hack, cut himself off from the online world, surfacing only when forced to help administer a deep-web criminal black market. He did all this in prison, though for episode after episode it looked as though he’d simply moved back in with his mom; this is what passes for a big reveal in Mr. Robot 2.0. Meanwhile, his plot’s patsy, E Corp exec Tyrell Wellick, is missing, and Elliot suspects himself—or his Mr. Robot persona, anyway—in the man’s murder. At first he spent his time in robotic repetition of the same routine, ignoring the abuse directed at him by his own split personality in hopes it’d just go away; he then gave in and let his alternate persona take over completely in times of suffering and pain. If this was indeed a revolution, Elliot’s suffering from shellshock.

His heir apparent at fsociety is his sister Darlene, who played the key role in actually pulling off the hack. But she’s left in charge of a fanboyish rabble she both dislikes and distrusts. Their new schemes amount mostly to harassment, blackmail, and political theater, none of them worthy followups to the destruction of the worldwide credit infrastructure. Her leadership style, a combination of bellicose bluster and dead-eyed cynicism, reflects her unhappiness.

And honestly, why should she be happy? Fsociety effed society, alright. Instead of the great leveling agent it was intended to be, the erasure of E Corp’s credit records merely widened the gap between the one percent and the rest of the world. A global recession has worsened the economic plight of the poor, while E Corp and its executive class, insulated by Scrooge McDuck swimming pools of money, live on in their usual fashion, even if they’re a bit more harried than usual. The real victims we see aren’t the bad guys—they’re a representatively average woman who discovers she suddenly owes her bank for mortgage payments she took care of long ago, or good-hearted Gideon Goddard, the security consultant who loses his company, his reputation, his husband, and eventually his life thanks to the chaos his ex-employee Elliot has wrought. All the while, E Corp’s proprietary digital currency grows closer and closer to dominating the ruins of the economy—the reason the company’s chief executive, Philip Price, was colluding with cyberterrorist leader Whiterose in the first place. Bleak? You bet. At times, watching the show makes you feel like Elliot’s friend Angela—working for the soulless E Corp and wondering what the hell it is you’re doing. Certainly many vocal viewers are complaining about just that: The show’s too slow, too grim, nothing’s happening, and what is happening is taking too long to feel good.

But it’s for a good reason. Given the grim reality that surrounds us, anything more optimistic would carry Mr. Robot straight into the realm of science fiction. Virtually all of fsociety’s real-world technological and political analogues have struggled to achieve their goals, been met with repressive state sanction, or seen even apparent successes reversed or ignored.

Though Edward Snowden’s exposure of the U.S. and U.K.’s pervasive surveillance of civilians has by now been called “a public service” by former attorney general Eric Holder, he still lives in exile in Russia, evading punishment from his own government even as he decries the oppressive regime in charge of his ersatz safe haven. His whistleblowing forerunner, soldier Chelsea Manning, is recovering from a suicide attempt following years of often inhumane incarceration for providing evidence of American wrongdoing in Iraq and Afghanistan to Wikileaks. Utilizing the omnipresence of camera phones to record incidents of police brutality and the power of social media to quickly spread them, the Black Lives Matter movement has mounted the single biggest challenge to racial injustice since the 1960s; nevertheless, cops have increased the rate at which they kill people since the movement began, despite their familiarity with the publicity and protests such killings engender. While BLM activists soldier on despite arrests and assaults, the earlier Occupy Wall Street movement — the group to which the politics of fsociety are most directly indebted—was violently crushed as the result of a coordinated effort by federal, local, and corporate security forces; the income inequality Occupy protested remains, frankly, obscene.

For every breach of cybersecurity that sheds light on the shadowy power of the one percent, such as the Panama Papers, there are seemingly countless hacks that endanger, embarrass, or defraud the undeserving, whether by stealing credit card information at Target or releasing the nude selfies of women celebrities. Even within the context of the mainstream political process, widespread public dissatisfaction with the state of the world manifests itself as grimly schismatic: the left-wing populism and socialism of Bernie Sanders and Jeremy Corbyn on one hand (the former defeated, the latter in a low-grade civil war with his own party), the racist right-wing revanchism of Donald Trump and Nigel Farage on the other. And the Twitter-fueled revolutionary movement that Egyptian-American Esmail has cited time and again as an inspiration for the show, the Arab Spring, was smothered in its cradle by pushback from authoritarian regimes (many of them, from Egypt to Bahrain to Saudi Arabia, armed and funded by the United States), leading to brutal oppression, lethally shortsighted American military interventions (most notably in Libya), and ultimately the nightmare of ISIS and the Syrian civil war.

Of course, if all it did was invoke current events in a knowing way, Mr. Robot would hardly be alone, or even noteworthy.  Aaron Sorkin did it for the purpose of uplift in The West Wing, and again, much less successfully, as a scold on behalf of a weird idealization of old-school journalism in The Newsroom. Homeland has been mining War on Terror paranoia for diminishing returns for years, while its new Showtime network-mate Billions is taking a rather soulless stab at the perfidy of the 1%.

What makes Mr. Robot unique is that it weds its politics to its emotional and visual palette. “We’re exploring what loneliness looks like today,” Esmail has said, and he’s dead on. This starts with the singular look cinematographer Tod Campbell has established for the show: characters “shortsighted” against the edge of the frame, like people staring into their laptop screens or smartphones; vast empty spaces above and around them, creating a sense of isolation and oppression. It extends to how Esmail and his fellow writers script the thing: Elliot and his companions communicate primarily the way most young people do these days—digitally. Text messages are more common than face-to-face meetings, which are riddled with anxiety when they do take place; even phone calls are reserved for only the most crucial information. Angela ensconces herself in the sonic womb of her headphones. Elliot stares listlessly at his few friends and his computer screen alike. Even relative go-getter FBI agent Dom DiPierro masturbates joylessly while sexting between bouts of insomnia. Talk to anyone who really loves Mr. Robot this season and you’ll get the same message: This show speaks to how it looks, sounds, and feels to be alienated in 2016, alone in a house or apartment with the internet at your fingertips and a world outside you but no real human connections.

That’s the difference between Mr. Robot and other political dramas—or, for that matter, between Mr. Robot and other shows that attempt to capture, and even succeed in capturing, young urban ennui, like Girls. It depicts the way political failure and personal failure blend together in our hearts and minds, becoming this inextricable, sticky depressive goo. It’s televised weltschmerz, and not since The Sopranos and The Wire were on has anyone done it better.

Mr. Robot’s first season was televised catharsis: a bracing breath of fresh political air on the TV landscape, unafraid to call out corporate and cultural malefactors by name and construct a story in which these evildoers could be taken down a peg or two. But to continue in that direction would be to betray the plight in which America finds itself—it would be a left-wing version of The Walking Dead’s hyper-violent paean to protecting ourselves from the dreaded outsiders by any means necessary. The bullet fsociety attempted to fire into the head of E Corp was no more fatal than the imaginary ones Elliot’s Mr. Robot blasted into his own brain. For the problems the show is confronting, there is no magic bullet; there may well be no remedy at all. That’s an unpleasant message, but that makes it all the more vital to hear. By wedding its political critique to intensely personal anxieties, Mr. Robot delivers that message loud and clear. 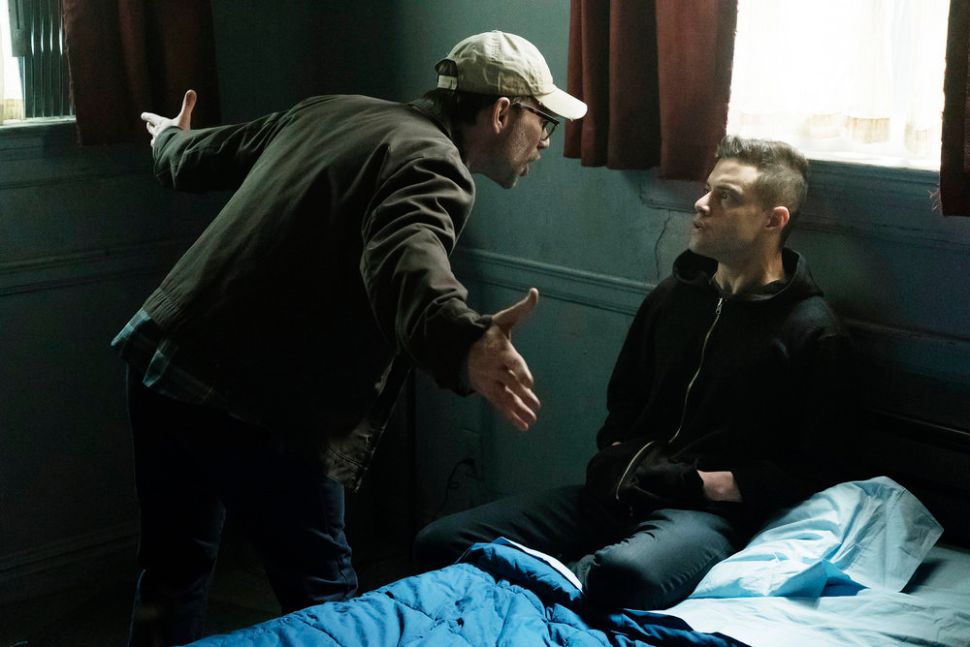