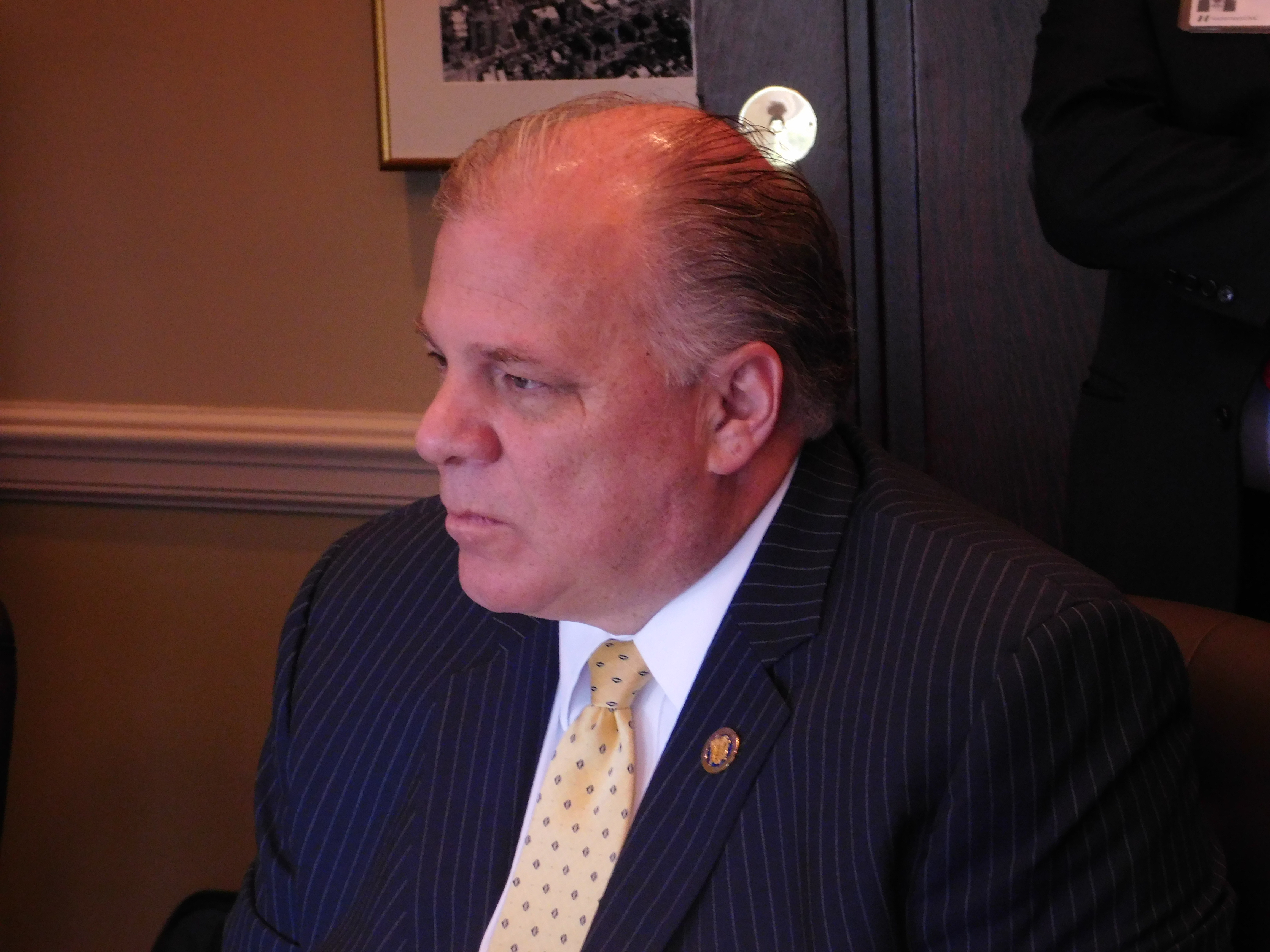 Sweeney said that TTF stalemate will may slow the public pension amendment.

LODI – Senate President Steve Sweeney (D-3) today announced that he had contacted U.S Attorney Paul J. Fishman and N.J. Attorney General Christopher S. Porrino to investigate the New Jersey Education Association (NJEA) and the Fraternal Order of Police (FOP). That call came as a response to news that the unions would not make campaign contributions until a much-debated pension amendment made it onto the November ballot allowing voters to decide if the state must make quarterly pension payments to public employees.

“I am not attacking teachers and I am not attacking public employees,” Sweeney told PolitickerNJ immediately following a forum on Sweeney’s school funding plan in Lodi. “What I am saying is their leadership crossed the line when they specifically said ‘We are not going to give you any money until you pass this.’ That is not allowed.”

Sweeney’s hardline stance has opened speculation that the senate president might be reconsidering his likely gubernatorial bid in 2017. However, according to Sweeney, his move on the pension issue will not impact whether or not he decides to enter the race.

“I never expected that there would be a lot of funding in the primary if I chose to run for governor,” Sweeney said of his potential fundraising plans. “If you run for governor and if there are several people talking about it–there is only one candidate announced and that is [former Ambassador] Phil Murphy–you’ll figure out your funding, what you can fund and what you can’t fund. None of my plans were based on ‘Oh I have to have a whole lot of money funded from the public sector workforce.’”

Sweeney also said that, while public sector union funding in a Democratic gubernatorial primary would be welcome, he will not let those considerations stand in the way of doing what he believes is right as senate president.

Sweeney said that, while he understands that his promise earlier this year to get the pension amendment on the November ballot may not be met, the pensions are currently being funded that amendment is not as pressing for this year as it once was. Sweeney also said that uncertainty with how the the Transportation Trust Fund (TTF) responsible for New Jersey’s road and bridge infrastructure will be funded has created too many unknowns for the state.

“I absolutely made a promise to put it on the ballot this year, I am not denying that,” Sweeney said. “But since then we had a billion dollar shortfall in the budget that needed to be closed by the end of the year and we have this uncertainty with the Transportation Trust Fund… We are not skipping the payment. So let’s try to get to a place where we can get all this done.”

While Senator Paul Sarlo (D-36) did not speak directly to Sweeney’s statements, the senator released a statement on Wednesday afternoon stressing “that the payments made this year and the budgeted commitment for the new fiscal year will keep the fund on track to reach full actuarially required funding by 2022.”

Like Sweeney, Sarlo’s statement suggested that pushing back the amendment issue to the 2017 ballot in light of full recent pension funding could be a possibility.

“We need to pass a constitutional amendment to guarantee future pension funding, including requiring quarterly pension payments in order to save tax dollars. But it is important to remember that the state made the required $1.3 billion pension payment in June and has budgeted $1.9 billion for the pension payment this fiscal year,” Sarlo’s statement read. “These are the agreed-upon amounts needed to ramp up to full actuarially required funding of the pension systems for teachers and state employees by Fiscal Year 2022 – the same schedule set in SCR-2, the proposed constitutional amendment. We need to take the right steps to see that the amendment gains enough public support to ensure its approval – in 2016 or in 2017.”

Republican Assemblyman Jack Ciattarelli (R-16) also issued a statement on Wednesday afternoon in support of Sweeney’s call for an investigation into the NJEA and FOP.

“If true, the quotes all but confirm a potentially criminal quid pro quo involving political contributions and public policy. Given New Jersey’s perilous fiscal situation, how can we possibly point our state on the right path forward with much-needed reforms – school funding, public employee benefits and property taxes – if special interests exert this kind of power and influence?,” Ciattarelli’s statement read. “I support Senate President Sweeney’s call for state and federal authorities to commence an investigation.”

While some like Sarlo and Ciattarelli have expressed support of Sweeney’s motivations, the move by the senate president has not been well-received all around. State Senator Ray Lesniak (D-20), another likely gubernatorial candidate in the Democratic primary, said on Wednesday that Sweeney’s did not “check the law” before making his statements. Another likely opponent in the Democratic primary, Jersey City Mayor Steve Fulop, also released a statement claiming that Sweeney should meet his commitment to put the pension question on the ballot.