My dad always told me that conservative candidates have to work twice as hard as their liberal opponents to win elections because they’re fighting two opponents: the Democratic Party and the media.

The usual suspects from left-leaning major media outlets like The New York Times, MSNBC, CNN and even entertainment networks are doing everything in their power to ensure a Clinton victory. Look no further than to Wolf Blitzer mincing around and drinking wine at the Democratic convention, celebrating Hillary’s nomination. But the propaganda skewing this election runs much deeper than just the media: our iPhones, iPads, social media networks, Google and even video games are all in the tank for Hillary Clinton—and it’s chilling.

I began looking into how strong the bias and censorship runs in these forums after I did an interview on the pro-Trump podcast, MAGAPod. The show’s host, Mark Hammond, was disappointed Apple wouldn’t run his show without an “explicit” warning. Hammond’s podcast didn’t contain content that would be deemed explicit under Apple’s policy, and most other shows in the News & Politics category aren’t labeled as such.

On June 18, Hammond talked to Sandra, a representative from Apple. She explained that, since the description of his show is pro-Trump, his show is explicit in nature—because the subject matter is Donald Trump. So, an Apple employee concluded the Republican presidential candidate is explicit.

iTunes has dozens of podcasts discussing Osama Bin Laden and Adolf Hitler—none of which is marked explicit. I encouraged Hammond to contact Apple again, via email to their podcast support team. Within 48 hours he received a response from “Tim,” who informed Hammond that his podcast would be updated to “clean” within 24 hours.

Over the past year, Apple twice refused to publish a satirical Clinton Emailgate game, “Capitol HillAwry,” claiming it was “offensive” and “mean spirited” even though the game’s developer, John Matze, cited in communications with Apple that the game fits the standards of Apple’s own satire policy. Apple has, however, approved dozens of games poking fun at Donald Trump—including a game called “Dump Trump,” which depicts the GOP nominee as a giant turd.

On July 25, Breitbart exposed this blatant double standard and favoritism toward Clinton. A few days after the article was released, Apple caved and published Capitol HillAwry, 15 months after Matze’s first attempt to go live.

While it’s commendable that Apple resolved both situations, Trump supporters and conservative users should never have faced such biased treatment in the first place.

Around the same time I was a guest on MAGAPod, a friend complained to me about how biased his Apple News feed is against Trump. I set up an Apple News account on my iPhone.

And if there are articles above the fold from more right-leaning sites? They paint Trump in a negative light and Hillary in a positive light. Of all the channels listed in the Apple News politics section, only two of the 16 arguably lean right—the rest are reliably left-wing.

This has, of course, been pointed out before, and anyone with an iPhone or iPad can go to Apple News to determine on his or her own if Apple is pushing leftist propaganda. Apple claims not to endorse candidates, but their actions suggest otherwise, and some of their executives—including CEO Tim Cook—actively support Clinton’s campaign. Buzzfeed recently obtained an invitation to a private $50,000-per-plate fundraiser Cook is hosting for Clinton with his Apple colleague, Lisa Jackson, at the end of this month.

Apple isn’t the only corporation doing Clinton’s bidding. Wikileaks founder Julian Assange said Clinton made a deal with Google and that the tech giant is “directly engaged” in her campaign. It’s been widely reported Clinton hired Eric Schmidt—chairman of Alphabet, the parent company of Google—to set up a tech company called The Groundwork. Assange claims this was to ensure Clinton had the “engineering talent to win the election.” He also pointed out that many members of Clinton’s staff have worked for Google, and some of her former employees now work at Google.

So it should come as no surprise that there have been multiple reports accusing Google of manipulating searches to bury negative stories about Clinton. SourceFed details how Google alters its auto-complete functions to paint Clinton in a positive light.

But Google has gotten into hot on multiple occasions for connecting Trump to Adolf Hitler. In June, when users searched “when Hitler was born” it generated the expected information on Hitler but also an image of Trump. In July, searches for Trump’s book, Crippled America, returned images of Adolf Hitler’s manifesto Mein Kampf. Google has since fixed both—but again, why do these issues always conveniently disparage Trump and help Clinton?

Twitter is another culprit. The company has gotten a lot of slack for banning conservatives and Trump supporters such as Breitbart’s Milo Yiannopoulos and, most recently, rapper Azealia Banks after she came out in support of Trump. Twitter has provided vague answers as to why conservative voices have been banned while they’ve allowed other users to call for the killing of cops.

The founders of some of the most popular pro-Trump Twitter handles—including @USAforTrump2016 and @WeNeedTrump—insist Twitter is censoring their content. They’ve pointed out that Twitter changes trending hashtags associated with negative tweets about Clinton (which has been reported before). On August 4, shortly after the hashtag “HillaryAccomplishment” began trending, it was taken over by anti-Clinton users, who used it to mention Benghazi or Emailgate. Eric Spracklen, @USAforTrump2016 founder, noticed the hashtag was quickly changed—pluralized to #HillarysAccomplishments.

“They take away the hashtag that has negative tweets for Clinton and replace it with something that doesn’t so the average person doesn’t see what was really trending,” Spracklen said. “This happens every day.”

Instagram has also banned accounts that depict Clinton in a negative light. In June, a conservative comedy group called Toughen Up America was banned with no warning or explanation. Last week, the popular Australian-based graffiti artist, Lushsux, was banned from Instagram after he posted photos of a bikini-clad Clinton mural he painted.

“I don’t want to sound like a conspiracy theorist with a tin foil hat, but the timing of the Hillary Clinton mural posting and the deletion that ensued can’t just be a coincidence,” he told the Daily Mail Australia. Lushsux has posted photos of way more graphic murals, including a topless Melania Trump and a naked Donald with his package in full sight. These images did not trigger any censorship from Instagram.

Facebook has a long history of shutting down pages and blocking conservative users while promoting progressive voices like Black Lives Matter activists. The problem became so transparent that Sen. John Thune sent a letter to Facebook CEO Mark Zuckerberg asking him to explain their practices.

Facebook denies it discriminates against “any sources of ideological origin” and Zuckerberg did meet with conservatives in an attempt to resolve this issue. While some walked away from the meeting encouraged that Zuckerberg wants to repair their relationship, other prominent conservatives rejected the invitation as a publicity stunt. It should be noted that Facebook employees have donated more to Clinton than to any other candidate.

Many conservatives have come to expect this kind of thing from the mainstream media. CNN, which paints itself as the centrist antidote to right-leaning Fox News and left-leaning MSNBC, has actually been among the most disingenuous offenders during this cycle, fully earning its derisive nickname “Clinton News Network.” For example, as NewsBusters pointed out for just one day, “CNN set aside nearly half of its air time on Wednesday’s New Day to various recent controversies involving the Trump campaign — 1 hour, 24 minutes, and 18 seconds over three hours. By contrast, the program clearly didn’t think much of the Wall Street Journal‘s revelation that the Obama administration secretly airlifted $400 million in cash to Iran. John Berman gave a 27-second news brief to the report, but didn’t mention that the payment was sent on “an unmarked cargo plane.” New Day, therefore, devoted over 187 times more coverage to Trump than to the millions to Iran.”

Another favored CNN trick is to present a “balanced” panel comprised of two Republicans, two Democrats and a host, as they did on the afternoon of July 29, just to name one instance of a hundred. However, the Republican side always features one Trump supporter and one “Never Trump” Republican, with the host grilling the Trump Supporter—often a beleaguered Jeffrey Lord—in what amounts to a 4-on-1. So much for balance.

Right now, CNN has a story on its site called “Which Republicans oppose Trump and why?” There’s no corresponding story about Democrats who oppose Clinton, even though her underdog challenger in the primary lasted far longer and received far more votes than any of Trump’s Republican challengers.

No Republican willing to criticize Trump is too insignificant to merit coverage on CNN. When a minor Christie staffer announced on her personal Facebook that she’d be backing Hillary, she somehow merited a 1200 word story on CNN’s website and euphoric coverage on the air by Brooke Baldwin for “splitting with her party.”

So that’s the traditional media. But this new strand, where one cannot even search for alternative viewpoints amid technology companies who stand to benefit from the free-trade policies and eased immigration regulations of a Clinton presidency, represents a dangerous sea change. There’s absolutely no question the digital forums we use every day are censoring conservatives and favoring Clinton. You can’t simply scroll through photos on Instagram, look for a video game in the App Store or do a quick Google search without being fed anti-Trump and pro-Clinton propaganda.

These companies are engaging in activity that can quickly lead down a very dangerous slippery slope and this should concern all freedom-loving Americans—not just conservatives. If you don’t know when the election is, no problem! Just Google it and see for yourself what comes up…

Liz Crokin is an award-winning author, journalist, political pundit and an advocate for sex crime victims. Her work has appeared in the RedEye Edition of the Chicago Tribune, the Chicago Sun-Times: Splash, Townhall, Elite Daily, Marie Claire and Us Weekly. Follower her on Twitter and Instagram @LizCrokin. 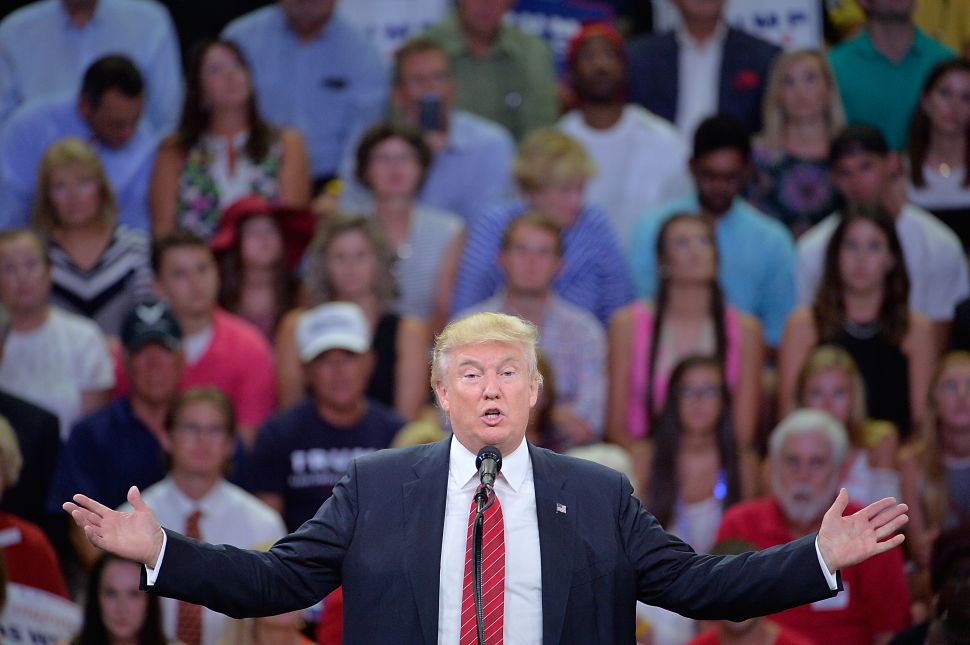