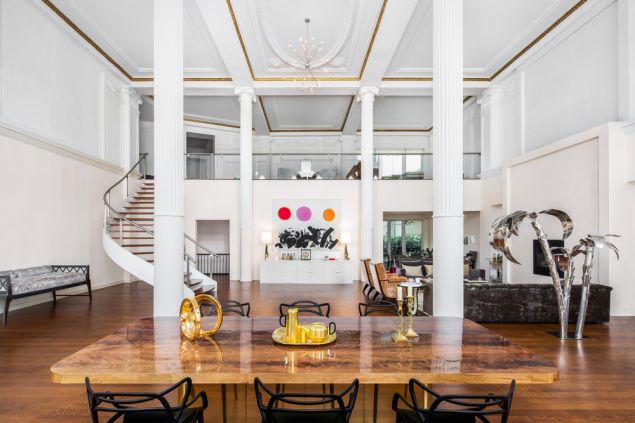 A certain condo in the American Thread Building has many exceptional features. The sprawling 8,000-square-foot unit is, after all, spread out over three floors at 260 West Broadway. Still, we think it’s safe to say that the original Keith Haring mural inside takes the cake over the 26-foot ceilings.

The School of Visual Arts, where Haring enrolled around 1978, used to hold exhibitions at the Tribeca building—the celebrated artist painted the mural on concrete (it covers part of one wall and some of the ceiling) when he was a student there, using shoe polish and alcohol to create the work. The mural was discovered during a 2001 renovation, though it didn’t have quite the impact in terms of a price as the then-sellers might have hoped. 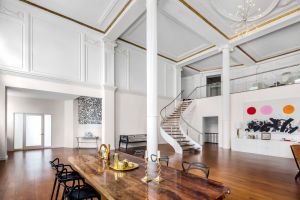 The mural can’t ever be removed. (Photo: Tim Waltman)

It was listed for $16 million in 2007, though the price was soon after slashed to $13 million. It reappeared on the market in 2014, asking $11 million, and finally bagged a buyer, Archer Diversified TCG LLC, which doled out $10 million to take ownership of the loft.

The three-bedroom, six-bathroom loft was relisted in June with a $13.95 million price tag attached. Two months later, it’s down to $11.995 million.

“We’re just extremely motivated to sell the product and get the next owner in, to come and do his thing,” Douglas Elliman broker Andrew Azoulay, who is sharing the listing with Catherine Charney, told the Observer. “I think it’s more of a steal now!

“There’s a value here at this point,” he said, “for the right person. At $12 million, it’s hard to say value, but there is, especially in Tribeca!” 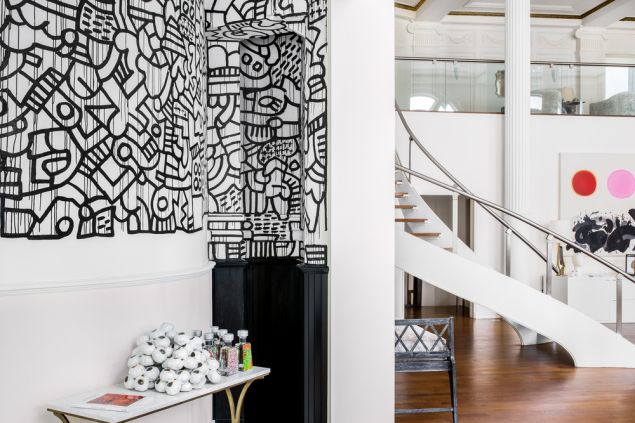 Keith Haring created the mural when he was student at the School of Visual Arts. (Photo: Tim Waltman)

The 10-room residence has its own website, which describes the discovery of the mural and takes note of details like the original cast iron columns, working wood-burning fireplace and full wall of arched windows.

“The massive ceiling heights off the entertaining floor create so much drama—it’s a pretty unique home overall,” Azoulay said. There’s a dining room with a private patio and a curved, custom stainless steel staircase.

The current owners made a few changes since moving in, particularly to the downstairs. “They kind of turned the whole downstairs space into an entertainment floor,” Azoulay said, citing a new movie theater, game area, wine cellar and a spa. The sleeping wing is off the mezzanine and includes a master suite with a double bath, wet bar and dressing room as well as a second bedroom. 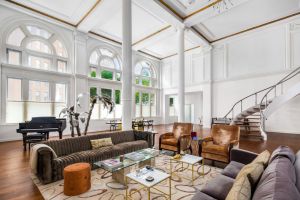 The 8,000-square-foot loft takes up the first three floors of the building. (Photo: Tim Waltman)

Potential buyers should also take note that there’s no way for the seller to take the mural with them when they vacate. Since the mural is painted onto a concrete wall, attempting to remove it would “turn it into gravel,” as New York Magazine wrote in 2008. “The mural is an exciting piece to talk about,” Azoulay noted. “It doesn’t hurt that it’s valued at $1 million, and you can’t move it!

“You don’t have to be a Keith Haring fan to love the mural,” Azoulay said. “It’s in a certain spot in the entryway, and anyone who appreciates art and the story behind it is going to love the mural.” 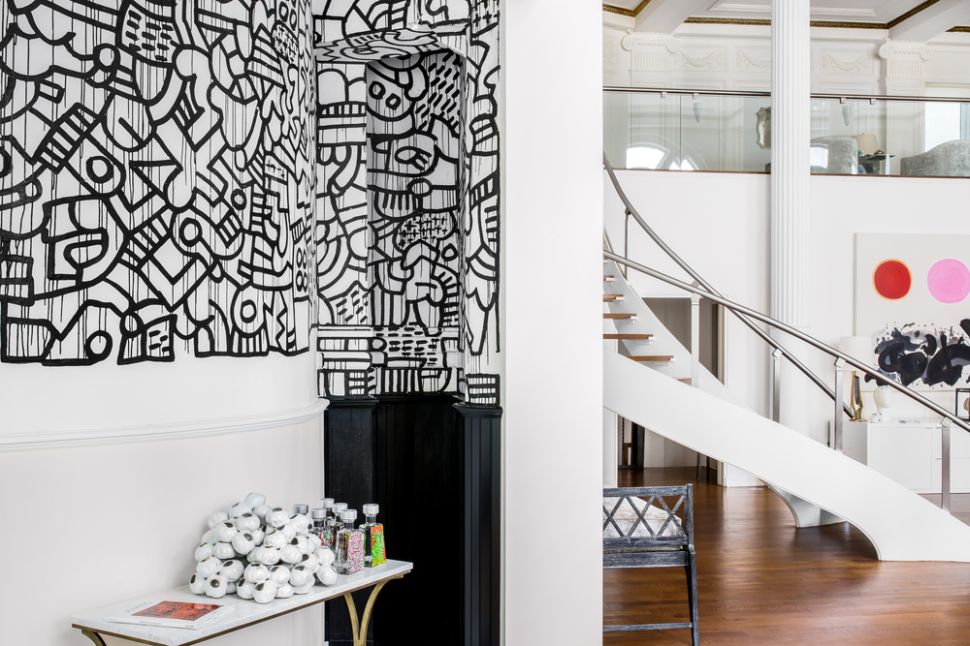