But most sources dismissed such analysis as infantile wishful thinking at best.

Sweeney’s allies, of course, laughed off the theory as folly. Even those operatives who aren’t in the Sweeney camp said there’s no way this deters him from moving forward into the teeth of a Democratic Primary, while his old North Jersey pal, powerful Essex County Executive Joe DiVincenzo, outright said Sweeney’s running.

One piece of speculation as to the political upside – or at least the calculus – for the statewide ambitious senate president perhaps lies in the area of education reform.

Remember, it was South Jersey that chafed under then-Assembly Speaker Sheila Oliver’s (D-34) resistance to charter school reform designs shared by Norcross, DiVincenzo and Governor Chris Christie. Oliver’s refusal to buy into charter schools was one of the reasons – if not the main reason – why establishment Democrats hastened her removal.

Now keep in mind that Sweeney’s chief rival for the governorship – Jersey City Mayor Steve Fulop – has a complicated record with charter schools. Fulop started off as a David Tepper B4K (Better Education for Kids) ally, competing in and winning over the local Board of Education on a reform message. But once he became mayor and took on the challenge of endorsing a candidate a year later in the neighboring Newark mayor’s race, Fulop cut away from those Tepper, Norcross and DiVincenzo backing Shavar Jeffries, and stunned the political world with his anti-establishment endorsement of Public School Principal Ras Baraka.

Of course, Baraka won and by association so did Fulop, as the pair of them mashed together created a new urban leader model in part defined by NJEA-friendly vibes. Baraka won witht he full organizational support of public school teachers and most other public sector unions. On the other side of the divide, it was Norcross and DiVIncenzo and Tepper who vainly tried to defeat Baraka, their effort marred by ham-handed reform interference in the public schools by the charter schools-advocating then Christie-appointed Schools Superintendent Cami Anderson.

Now fast forward to Sweeney throwing a punch yesterday at the NJEA’s mouth and incurring all manner of bewilderment in political circles statewide.

“Steve’s committing suicide,” one Democrat wailed in a phone conversation with PolitickerNJ.

But if one puts Sweeney’s alliance with Norcross and DiVincenzo in context and considers the fact that Tepper is reportedly more than mildly irritated with Fulop because the mayor purported to be a charter school reform guy then turned around and backed Baraka, the Sweeney play begins to take on a less grainy political intent.

Sweeney will already have Building Trades organizers in his campaign when he runs for governor.

Of the top tiered candidates right now he is in the best political position to land the coveted line of the Essex County Democratic Organization.

But what if he can claim too a reanimated B4K Tepper reform mission, galvanized presumably by Tepper’s own desire to get revenge on the recalcitrant Fulop?

Sweeney’s people shot down the theory, saying they wished they were so calculating.

But the core of it makes sense, at least on paper.

PolitickerNJ earlier today reached to B4K for a comment on Sweeney’s slap in the face of the NJEA.

But open to interpretation.

“Senate President Sweeney has always been a man of his word and a champion of public education,” said Shelley Skinner, B4K Executive Director. “He is someone who has kept his commitment to New Jersey’s urban parents and fought to ensure all children have opportunities for success.” 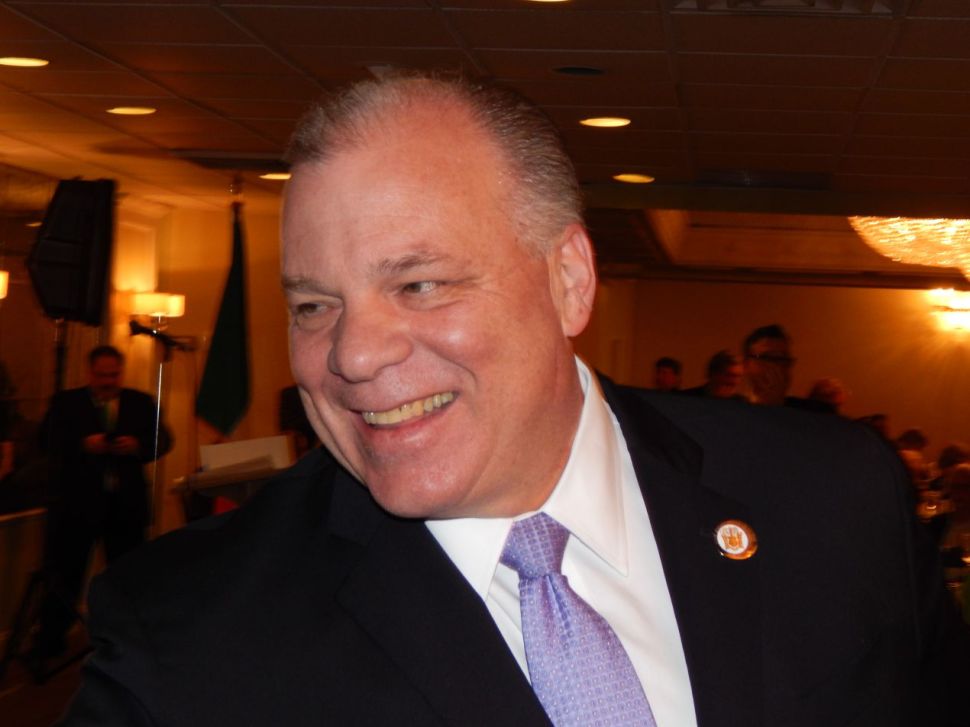