The ultimate pop-up happened last week in The Bronx: A giant misshapen phallus bloomed. The spectacle lasted Thursday afternoon to Saturday, and attracted thousands of visitors to the New York Botanical Garden, some seduced by the rarity: The NYBG hasn’t had an erection like this one, growing from 22 inches to more than six feet in 10 days, since 1939.

Some were inspired by the Gilmore Girls trailer: Rory Gilmore searched, and so did they. Most visitors, however, were enticed by the smell. The phallus is part of a titan arum (Amorphophallus titanium), a tropical plant as famous for its gigantism, unpredictability and ephemeral nature as it is for its stench. You probably know it as the corpse flower, so called for its famed malodor, said to mimic that of rotting flesh.

Of course many of us have no comprehension of that particular scent. We considered what it might mean. Sunburn smell? Infected cut smell? Mouse-died-in-wall smell? Gangrene? Halitosis? Sheesh. This is like when someone sniffs a carton of spoiled milk and offers it to you: Eew! Smell this. Why do we do that? Aren’t the regular olfactory assaults we endure in New York—urine, the subway, people, garbage, irresponsible dog owners—enough? Nope. Turns out this smell is stand-in-line-for-up-to-an-hour special.

Behind us, Andrew Coté shared a, um…“fact” with the crowd. “Most people don’t realize the corpse flower produces its noisome scent because once per decade it opens up and a child under 12 months is thrown in and sacrificed.”

Really, though, the scent lures pollinating insects, the kind attracted to rotting meat.

Coté, a Manhattan resident and urban beekeeper with a child under 12 months attached to his chest via BabyBjörn, told the Observer he was there “to see if anything can smell worse than a 9-month-old’s diaper.”

Smiling and nodding in agreement, those in line moved forward and entered the greenhouse that is the conservatory dome (you know it from the orchid show).

You notice the corpse flower immediately. It’s huge: 6-foot-4-inches tall. This one had a gigantic Dijon-mustard-yellow spike, like a partially dehydrated wax bean (wrinkled), if wax beans were enormous, protruding from an equally enormous, pale-green textured leaf, wrapped around the spike like an upside-down skirt that endured the spilling of a magnum of burgundy along its ruffled, textured edge. If you want to sound botanic you might call the bean the spandix and the skirt the spathe. Some said pod and petal. Either way, everyone was impressed. The sight, perhaps, diminished the scent.

“It almost looks like a sculpture,” said Marie-Helene Attwood, a landscape designer who lives in Clinton Hill. “It’s improbable.” Attwood had the 24/7 live Corpse Flower Cam up on her screen all week, exciting colleagues Rosanne Herrero and Dima Rumiantcev, who joined her to experience the fleeting ornamental.

We experienced it like a sandwich lost in a beach bag long ago, or the fridge at work, or the moldy aftermath when your bathroom ceiling collapses from a leak two floors above, like wet leaves, rotting. Hey, rotting! And we could feel and taste it in the mouth and throat like an acetic allergic reaction.

“It’s like when you don’t throw out garbage for a week,” said Bob Matte, a Pelham Gardens resident.

“It’s like Thai fish oil,” said Annemiek Matte, who visited every day of the week in anticipation of the bloom (predicted five days earlier). She had begun to explain the flower’s rapid growth—four to six inches per day—when she was seized by a whiff that induced violent gagging.

“It’s beautiful. It could be a piece of art,” Annemiek said, temporarily revived by a stash of fresh mint kept in her purse. “I wouldn’t be surprised if Chihuly created something based on this.” The glass sculptor’s work has been exhibited at the NYBG.

While no one agreed with the boy who said the flower smelled “nice,” everyone left satisfied. Later, we swear, clothes retained the fragrance, and the next thing we ate tasted slightly sour. The corpse flower reek may have been subtle, but it was persistent. Smell you later indeed. 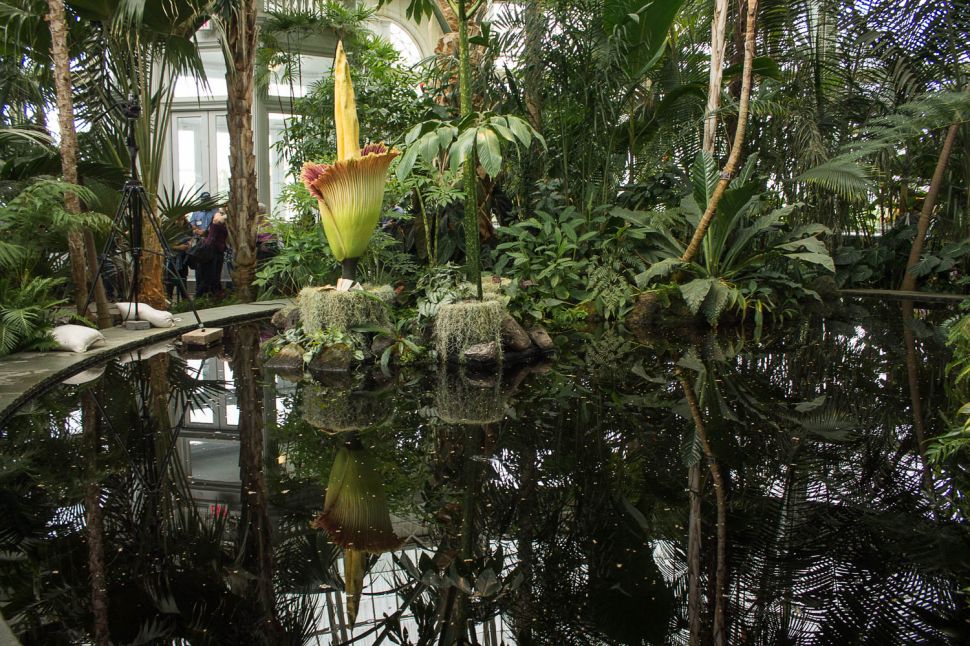