“Whoever you are, I have always depended on the kindness of strangers,” says the frequently delusional Blanche Dubois near the bitter end of Tennessee Williams’ Pulitzer Prize-winning play A Streetcar Named Desire.

Ah yes, kind strangers. It’s a playwright’s loaded line. Put bluntly, Miss Blanche may practice intermittent prostitution. According to rumors, before her New Orleans travails, Blanche lost her Mississippi hotel digs because her scandalous associations with menfolk tarnished the joint’s reputation. This naughty gossip, Blanche’s louche behavior, her iffy relationship with what we might call the truth—the drip, drip, drip of on-stage evidence—leads many play-watchers to conclude, yeah, right, Tennessee Williams, I get it. That kind of kind strangers, the kind that tip the tart.

Blanche Dubois is a fictional character. Hillary Clinton often inhabits a fictional universe. Claiming she was targeted by snipers in Bosnia and telling Fox News interviewer Chris Wallace that FBI Director James Comey exonerated her grossly negligent mishandling of classified information are just two examples of Hillary’s fictional existence. However, Hillary’s State Department was no cheap Mississippi hotel, and the latest batch of emails confirming close, coordinated contact between Hillary’s top State aides and the kind strangers who donate to the Clinton Foundation ain’t rumors spread by traveling salesmen. Even The Associated Press is troubled by the number of Clinton Foundation donors with quick access to Hillary’s senior staff.  The second paragraph in the AP report has numbers, not rumors:

“At least 85 of 154 people from private interests who met or had phone conversations scheduled with Clinton while she led the State Department donated to her family charity or pledged commitments to its international programs, according to a review of State Department calendars released so far to The Associated Press. Combined, the 85 donors contributed as much as $156 million. At least 40 donated more than $100,000 each, and 20 gave more than $1 million.”

“Released so far.” That’s the AP acknowledging the drip, drip, drip technique. More of Hillary’s emails continue to appear, including emails she swore she destroyed because they were personal.

Indeed, it appears evidence of an axis has emerged, drip by drip, an axis that operationally connected Clinton Foundation donors to Hillary’s State Department. That suggests from 2009 to 2013, when she was secretary of state, Hillary ran a hybrid organization—what we might call the Clinton State-Foundation—which served the needs of Foundation donors, in return for their… kindnesses.

If  the Clinton State-Foundation looks like a pay-to-play bribery operation, well, it sure looked like Blanche Dubois was sleeping around a bit with kind strangers, didn’t it?

Rajiv Fernando was a kind stranger who, in 2011, thanks to the kindness of Clinton senior aide Cheryl Mills, ended up as a kind stranger in a strange land—or at least strange from the perspective of everyone else on International Security Advisory Board (ISAB).

Now, the ISAB’s portfolio is to provide advice on “arms control, disarmament, nonproliferation, international security, and related aspects of public diplomacy.” Fernando? He was a Democratic Party donor who had “given up to $5 million to the Clinton Foundation.”

Fernando had absolutely no experience much less expertise in security and diplomatic issues. Yet on one occasion when he attended a board meeting, members were discussing issues that required examination of top secret intelligence. As the Washington Examiner notes, it took a Freedom of Information Act request by Citizens United to shakeout the emails that revealed the “scramble” by Clinton’s aides when ABC News asked for Fernando’s resume.

Wouldn’t media bigshots call for a special prosecutor if a Republican administration had such a blatant appearance of compromise?

And what do the emails reveal about Kind Stranger Rajiv’s appointment to a prestigious national security board despite his complete lack of qualifications?

“We must protect the Secretary’s and Under Secretary’s name, as well as the integrity of the Board. I think it’s important to get down to the bottom of this before there’s any response,” the aide added. “The true answer is simply that S staff (Cheryl Mills) added him,” another official later wrote. “Raj was not on the list sent to S; he was added at their insistence.” “S” is an abbreviation often used to denote the secretary of state in documents. In this case, it was a reference to Clinton.”

Ouch. It appears Cheryl Mills, Hillary’s chief of staff and State-Foundation operative, added Rajiv Fernando, at Hillary’s insistence. When the veil was lifted the rats ran from the light. Kind Stranger Rajiv left the ISAB four days after his background was called into question. It was, so to speak, Fernando’s hideaway.

What does Rajiv Fernando actually do for a living? He says he is an investor. He certainly “invested” five million bucks in the Clintons. This kind stranger got his goody—the board position—but he didn’t get to keep it. Did Rajiv Fernando get anything else for his five million? We don’t know. It is, at this point—given the drip, drip, drip—a fair question to ask. It is a question that deserves an answer.

Prostituting the State Department isn’t a sly joke—it’s unethical, it’s a national disgrace and it’s probably criminal. It will take a special prosecutor to evaluate the criminality because the Obama Administration is culturally and ethically incapable of conducting an investigation. Attorney General Loretta Lynch is totally compromised by the Clintons. The late June 2016 meeting in Phoenix between Lynch and Bill Clinton followed by FBI Director Comey’s sell out of the law proved that.

Follow the link to the Judicial Watch page—and follow the money as the Huma and Doug State-Foundation team helps Clinton Foundation donor Casey Wasserman solve a problem related to a “criminal charge.” Wasserman is identified as a “a millionaire Hollywood sports entertainment executive” who gave the Foundation somewhere between five and ten million dollars.

For three years the Obama Administration stonewalled The Associated Press’ requests for information. The AP had to sue in federal court to get the information “released so far.”

Of course the AP isn’t the only outfit getting stiffed. Citizens United and Judicial Watch have encountered similar stonewall operations. The Obama Administration, on behalf of Hillary, is pursuing a Watergate-esque modified limited hang-out and stalling and stonewalling are part of the strategy.

The result is a clear cut case of waging war on honesty—war on honesty waged by the President and his Administration. Oh yes, indeed, it isn’t just the strategic falsehood. The Administration has justified its delays by tactical lies. See, it’s difficult to respond—time-consuming—because the questions are complex, so many pieces of information, and so forth, etc.

Buying time is the goal. An interim goal was buying enough time to knock Bernie Sanders out of the presidential race. They succeeded there. Now, as Politico pointed out August 24, 2016 the Administration and Team Clinton are trying to “run out the clock” in the general election.

The Clinton Foundation, with its plethora of kind strangers, foreign and domestic, is proving to be a problem. It won’t stop the clock, but clock watchers should beware: prostituting the State Department isn’t minutia. It’s the precisely the kind of sleazy, self-serving political class revelation that ticks people off. People get it. Everyone knows what “on the take” means and the Clinton Foundation certainly looks like a global bribery and crony access scam run by a former a president and a first lady who is a presidential candidate.

Donald Trump has called on the Clintons to shut down the Foundation and end their dependence on kind strangers.

But The Boston Globe, that bastion of Democratic Party Media Privilege—even The Boston Globe wants the Clintons to stop accepting Foundation donations if Hillary is elected president.

It appears The Boston Globe’s editors don’t have the guts to call the Clintons what they are: corrupt. Their editorial plea called the Foundation a “distraction.” Distraction? C’mawn Beantown media bigshots—it’s their business and it’s a big business. When Hillary was secretary of state the Clinton Foundation accepted shady donations. Those moral, ethical and perhaps criminal failures should be investigated, right?

Wouldn’t you, Beantown media bigshots, call for a special prosecutor if a Republican administration had such a blatant appearance of compromise? For at least five years questions about quid pro Clinton quo have tagged Hillary and the Clinton Foundation. Those questions generated the Freedom of Information Act requests that the Obama Administration slow-rolled. Like pulling teeth? The AP and Judicial Watch experienced something much worse than pliers wrenching a human molar. We need a better dental metaphor. Like trying to extract a tusk from a bull elephant in musth. Credit the AP’s Washington bureau and Judicial Watch and Citizens United—they are trying to get at the truth.

So, Boston Globe editors, now that we know Huma and Cheryl met the needs of Foundation kind strangers, why not demand the Clintons shut down the Foundation immediately? It’s tainted worse than Blanche Dubois’ seedy Mississippi hotel. To say otherwise would be waging war on honesty. 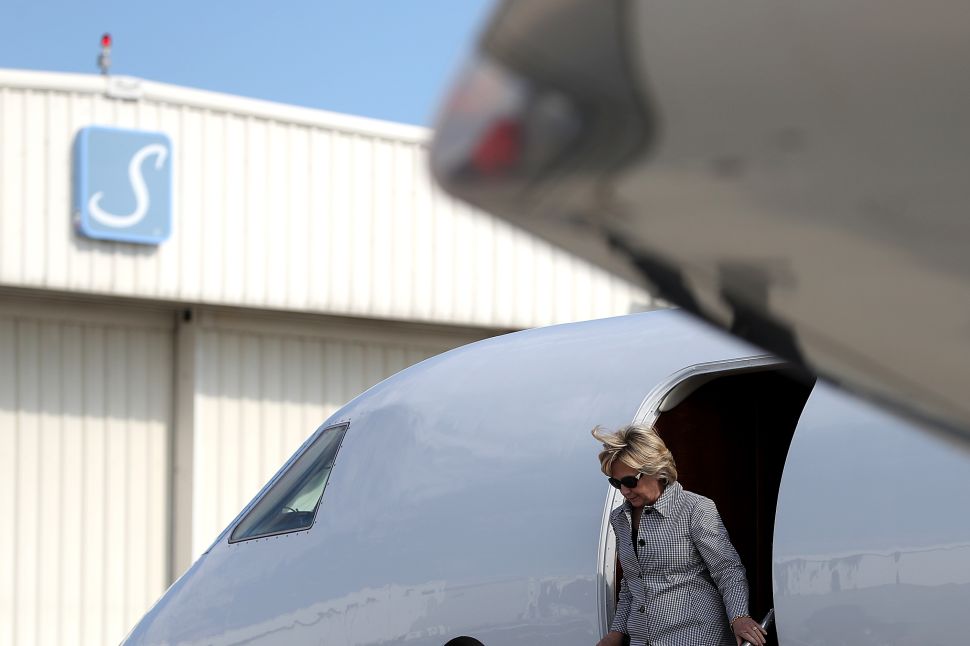