There’s no experience more wondrous than the moment you first learn there’s music in space.

Generations of kids got wise when they heard Dark Side of the Moon for the first time, and some even earlier upon discovering the works of Sun Ra or Alice Coltrane. My fortunate musical education provided me with all of that, but it wasn’t until much later in life, when working for the record label of composer Philip Glass that it all made sense.

One evening Glass spoke with astrophysicist Greg Laughlin as part of the Rubin Museum’s BRAINWAVE speaker series about the music of the cosmos. They were how, when the sound of planetary orbits was recorded and adjusted to something we could hear on an audible spectrum, the orbits sounded just like Tibetan prayer bowls. This confirmed that music was not only innate to the universe, but that we humans are channeling it.

It also put those years in high school orchestra spent learning Gustav Holst’s 1916 astrological symphonic suite, The Planets, into perspective. The bright string runs that opened “Jupiter” still ring with the rush of interplanetary wonder, while the brass of “Mars” still sounds like impending cosmic conflict. Whether we consciously know it or not, the voices of orchestral music have long been well-versed in the music of the stars, too, for so long that they’re imbedded in our subconscious.

Those bright string runs and foreboding brass runs make brief textural appearances in The Hubble Cantata, composer Paola Prestini’s brilliant collaboration with librettist Royce Vavreck and the Hubble Space Telescope’s lead astrophysicist, Dr. Mario Livio. But in all other arenas, Hubble pushes its classical cosmic themes ever more upward than any orchestral work these ears have ear in a long time, upward and toward the stars.

After four years in the making, the success of this multi-disciplinary performance lies in its ability to exist as both high art and popular entertainment. And so The Hubble Cantata is a work that knows no parallel, pushing boundaries of technology and presentation that push our city’s relationship with multi-disciplinary performance further into uncharted territory.

The piece’s world premiere last weekend at BRIC Celebrate Brooklyn! Festival in Prospect Park not only utilized a 100-person choir, a 20-piece ensemble, baritone Nathan Gunn and soprano Jessica Rivera—a massive production by normal standards alone—but a Virtual Reality climax to the piece, wherein the audience downloaded the VR film on their phones beforehand and raised their viewers (the same Google Cardboard boxes the NYT sent out to subscribers last fall) when the on-stage screen gave the signal.

“We decided to create a piece that would essentially follow a woman’s perspective, who had lost her child and killed herself,” Prestini told me. “We began to create this hyper-structure of the birth, life and death of a star, but within it a human narrative that connects to it.”

That story, told through Vavreck’s libretto and delivered by Metropolitan Opera stars Gunn and Rivera, was further advanced with Sasha Arutyunova’s beautiful black and white photographs on a giant, translucent screen that covered the stage. The orchestra was tastefully silhouetted, visible only in the moments appropriate to the piece.

Such a message might sound like boiler-plate inspirational dreck in lesser hands, but it’s to The Hubble Cantata‘s credit that the piece never panders to its audience or offers any easy answers to the difficult metaphysical quandaries it proposes.

Prestini’s score is equally dense and modern in moments that communicate our characters’ duress, while airy and light in the story’s moments of transition or epiphany. Her ability to intimately evoke specific emotions and feelings with her phrases speaks to time spent not only as an accomplished composer for new media and modern orchestral performance.

Prestini’s time spent perfecting 30-plus commissioned multidisciplinary works and serving as creative and executive director of Williamsburg’s National Sawdust has only further fortified her with the tact to balance all the voices, mixed media and technology that combine to make The Hubble Cantata such a spectacle. Hence, Eliza McNitt’s stunning five-minute VR climax doesn’t come off as gimmicky or tacked on. Instead, Prestini’s decision to use the Hubble’s imagery sparingly speaks to her tasteful intuitions as a multi-disciplinary artist. (Her production company, Vision Into Art, also produced the show.)

“We decided to not use Hubble imagery until the very end of the piece,” she said, “and holding back was very important. Because by the end, when you’ve really connected with the human story and you finally get to be in the Orion Nebula, it’s much more visceral.”

It’s such commitment to using new technology, not as a driving force but as a means to accent the work, that makes The Hubble Cantata a resounding success. More often than not technology puts us at a distance from establishing an emotional connection, but it doesn’t have to. And that’s a valuable lesson in of itself.

Many families brought young kids to the performance, which was both free and outside, and for its entire spectacle, a more enticing young person’s gateway into the world of classical music does not exist.

Astronaut Mike Mannino was also on hand, regaling youngsters with tales of his time spent servicing the Hubble, including one harrowing tale where he had to break off a support rod in the blackness of space so that the thing would work properly.

“We’re the repair people,” he told the crowd, “and we did the job so people like Mario could look at the images and make the great discoveries that they did.”

The packed house ran out of its 5,000 viewers, and even on the lawn an empty spot was tough to come by; The Hubble Cantata demonstrated that people will still turn out for classical music, even when it’s presented in new, more modern perspectives.

“It’s just really cool that we’re no longer at a time when only one type of classical music is allowed,” said librettist Royce Vavreck. “We are free to dream, and this piece really came from that liberation.” 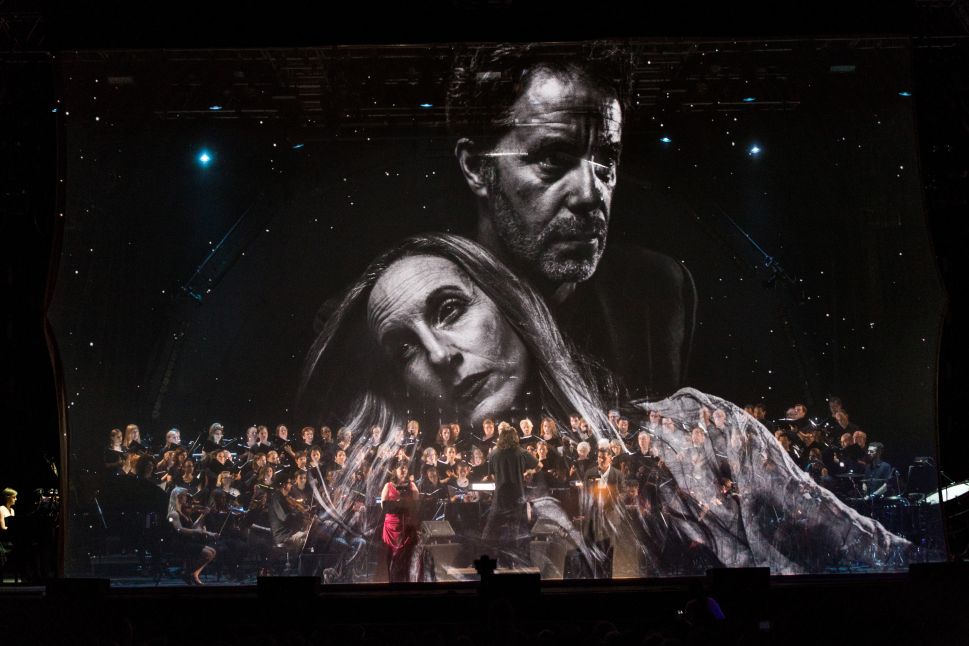