It’s a sprawling county of strip malls, connect-by-dots diners, roadside drift doubling as residential habitations (occasionally the shadows of human forms are visible behind shades in the blue glow of TV living room land), telephone towers that look like something out of a bulldozed Ray Bradbury nightmare, and bumper to bumper traffic on the vertigo-inducing heights of an ugly uplift of concrete called the Alfred Driscoll Bridge.

If Hart Crane had seen the Driscoll, he might have puked instead of writing his Brooklyn-inspired masterpiece The Bridge.

The eastern reaches of the county look like belching factory barges tethered to the Arthur Kill River. Places like the Chevron Asphalt Plant, Harbortown, and Carteret, ludicrously named for a royalist governor. If the Jersey Shore routinely compares unfavorably to beaches in South Carolina and Florida, the Arthur Kill makes Seven Presidents Park look like the Gulf of Mexico.

The freeholder board regularly claps themselves on the backs for creating a battery of park rangers.

What do they patrol, the island strips between parking lots?

The place is run by Democrats (155,000 registered Dems to 53,00o Republicans). They have the freeholder board, and control the councils in the main towns and cities, including Edison, Woodbridge, Monroe, Perth Amboy, and Carteret. Pockets of GOP resistance include a mayor in Sayreville and toeholds like Old Bridge. Republicans in Somerset over drinks distance themselves from Republican presidential nominee Donald Trump by saying things like, “He’ll play well in Middlesex.” It’s another way of saying that eccentric Republicans (ie. angry white males who used to work at the shuttered factories in Middlesex) will have no problem backing Trump, but people who go to his golf course in Bedminister (and whose properties abut the riding grounds of former Governor Christie Todd Whitman)won’t, or at least won’t admit it publicly.

Passionate Republicans are always lying in wait in Middlesex, many of them cast in gloom now over a missed opportunity for greater gains during Governor Chris Christie’s tenure. When Christie edged Jon Corzine for the governorship in 2009, his supporters highlighted the vote totals in the Central Jersey county, where the former U.S. Attorney squeaked out a win over the Democratic incumbent: 94,506 to 89,732. In 2013, Christie clobbered his Democratic opponent (who was from Middlesex) in the county: 101,619 to 70,225.

Christie had no coattails, however, as Democrats strengthened their regime for the foreseeable future. Essex remains the prize county for Democrats in terms of raw numbers, followed by Bergen, followed by Hudson and Middlesex.

Now a political gamble by the county party chairman has Middlesex occupying the center of the political universe as South Jersey lines up behind Senate President Steve Sweeney (D-Gloucester) on one side and North Jersey (with the exception of Essex, which also leans Sweeney) leans toward Jersey City Mayor Steven Fulop.

McCabe was the story last week when those members of the Democratic establishment affiliated with Sweeney stuffed their faces in the presence of a watchful South Jersey Democratic boss George Norcross III at a dinner in Mountainside.

Not only did McCabe not show up, but – in a flex of real power since he assumed the chairmanship back in 2013 – he commanded his lawmakers to likewise sit it out. While numerous individuals from Essex and Union and South Jersey went and sat feeding in a cold sweat for two hours, no one from Middlesex attended the soiree.

“McCabe likes people to pay attention to him,” concluded one of the establishment players who went to that meeting, rolling his eyes at Middlesex’s recalcitrance. At least one other source complained of the chairman’s James Bond villain-like attention to the minutest details of social etiquette, as though McCabe’s punctilious  style mirrored too much those theatrical elements of Norcross world.

Norcross has a helicopter that descends on dinner scenes like Sinatra wooing Mia Farrow.

In a world that prides itself on lower primate behaviors, McCabe actually pays attention to things like language and ideas.

He studies history, and can carry on intellectual conversations about why, for example, FDR matters.

Those are head-spinning affectations to a whole understory of New Jersey political homunculi.

But style and taste aside, other politics watchers see McCabe’s play last week as a newfound declaration of relevance by a county mocked for years, ever since the meltdown of back to back party chairs starting in 2006. Then U.S. Attorney Christie jailed powerhouse Senator John Lynch on mail fraud and tax evasion charges. Before Christie chopped him down, Lynch was a big-shot, one of the legendary county party chairs of recent vintage who served as senate president from 1990-1992. A person doesn’t sit in that chair without finding a way – or having a boss find a way – to make his county relevant in the grander scheme of 20 other jockeying counties. Lynch was his own boss until his crack-up.. His replacement, Sheriff Joe Spicuzzo, projected bumbling, non-threatening avuncular irrelevance, before getting jammed up on bribery charges and following Lynch to jail.

Sandwiched between those trips to the slammer, Perth Amboy Mayor Joe Vas – who left unfinished a leaking City Hall homage dubbed the Vas Mahal, his attempt at a pagan temple built with taxpayer dollars – found himself in a pair of handcuffs on kickback charges.

Who would be the next smiling face on a government website to end up behind bars?

In a paranoid party atmosphere, McCabe – a labor leader with the Carpenters who grew up in Iselin – tried to succeed Spicuzzo as chairman in 2011. They had already gone through the uber-powerful Lynch who had catapulted James McGreevey to the governorship (oh, yeah, there was that Middlesex meltdown, too, in 2004). They had the harmless old sheriff. McCabe played the young up and comer card. But veteran state senator Bob Smith (D-Piscataway) – the real unspoken successor to Lynch – was in no mood to take his chances on a relative unknown amid haywire party optics everywhere.

On the night Barnes stared down a challenge from the comer, McCabe stood up in front of a cobwebby, mildewed party apparatus of patronage rank and filers. Young and energetic, with an Irish flair, he looked like a long lost Kennedy brother suddenly beamed down from the Enterprise to address a room frozen in time since that fateful day in Dallas.

McCabe blew the crowd away that night.

Heads lolling sideways on necks miraculously elongated to the strains of a literate speech delivered passionately without notes.

McCabe lost, but there was no doubt he’d be back, and once Smith had (more or less) staunched the nightmare, Barnes stepped out in exchange for his son becoming senator, and McCabe finally assumed the chairmanship.

The timing was troubling.

McCabe was picking out drapes for his office when Christie left his 2013 challenger, state Senator Barbara Buono (D-Metchuen) – who was from Middlesex and hopeful of winning her home county, at least – for roadkill.

Intra-party squabbles left over from the earlier era prevented McCabe from radiating the Kennedy Inca headdress that shone forth when he first landed on the scene. Towns that were supposed to be Democrat gave advantages to Republicans. Then a 2014 congressional primary left Middlesex in chalk talk mode, trying to re-evaluate when the hell what wrong as the smaller Mercer dolled out a beating on the big, wobbly legged neighboring county.

Middlesex started shrinking alongside a place like Bergen, where Chairman Lou Stellato not only recorded real victories, but – true to his funeral parlor roots – buried the GOP, leaving serious questions about its future in a longtime bellwether county.

But while Stellato has picked his fight with South Jersey and made himself clear about staking out a side opposite Norcross, McCabe is simply staying coy early.

Sources say McCabe leans toward former Goldman Sachs executive luminary Phil Murphy in the developing 2017 governor’s contest. But while he doesn’t mind standing in the prow alone now, he doesn’t want to end up an island with Murphy if everyone else is divided between Sweeney and Fulop.

He also wants something in exchange for awarding the line.

A legislative leadership post for someone from Middlesex would be nice.

Essex and Bergen have fought like the two musclemen in the room for the right to succeed Sweeney as senate president.

Powerful Essex County Executive Joe DiVincenzo wants his acolyte, state Senator M. Teresa Ruiz (D-Newark), to occupy the throne of senate power. State Senator Paul Sarlo (D-Wood-Ridge) has visions of himself up there – if only he can persuade Stellato to join the Norcross-DiVincenzo club.

Smith, too, could contend.

But sources mostly affirm Vitale as the play.

It was the Woodbridge Mayor John McCormac/Vitale wing of the party that backed McCabe to begin with, as they suffered Smith/Barnes for two years until they grasped the joysticks of party power.

Vitale as senate president in exchange for the line in Middlesex.

There’s also, conceivably, Assemblyman Craig Coughlin (D-Woodbridge) as speaker of the assembly for the line.

After a wilderness of humiliations and setbacks, Middlesex and McCabe believe they’ve earned a shot at relevance, and are playing the game now for keeps.

On that ghostly street in Woodbridge one night last year, an insider wearily looked ahead to the coming gubernatorial contest and said it could all come down, for Chrissakes, to McCabe looking into the unforgiving eyes of Norcross and refusing to flinch.

McCabe still works for the Carpenters, a Building Trades outfit close to Sweeney, who, after all, is close to Norcross.

But right now such an old boss/new boss stare-down across suburban no-man’s land before it’s all over is not out of the realm of maybe. 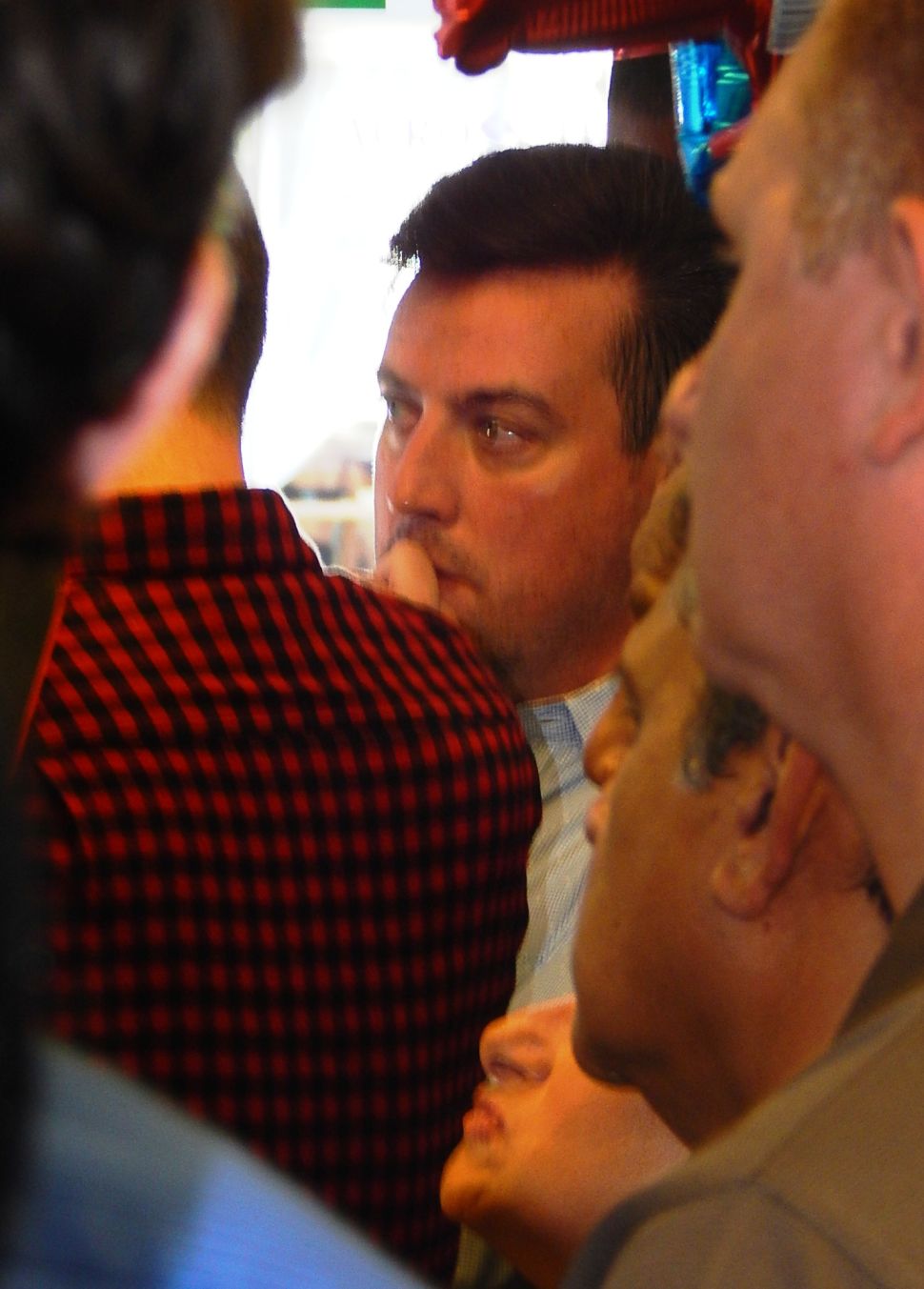