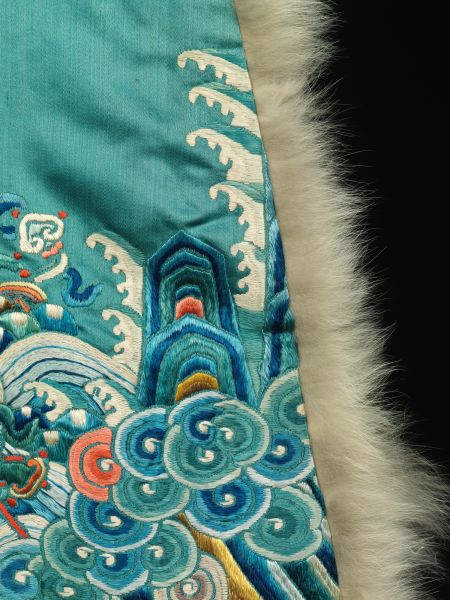 The Met’s “The Secret Life of Textiles: Animal Fibers” is the second installation in a three-part exhibition series devoted to the art and science of textiles. This series is unique for the Museum; giving conservators a platform to showcase their work to the public. These are usually the people who hide in a museum’s wings, offering essential research for curators, but they are rarely the public face for any given exhibition.

It is a unique opportunity, one which the curator, Florica Zaharia, together with her colleagues Minsun Hwang and Kristine Kamiya, relish in. Normally, they would present their work to other academics, but they wanted a broader audience to understand their skill set and knowledge. As conservators, they wanted to create an exhibition that explained what they do. “In textile conservation, we cannot see a textile without fibers. It’s the basic element that forms a textile. So understanding what an object is made of, it’s essential for us [to know] for treatment, for locating a particular culture, time period, and so on,” Zaharia explained. 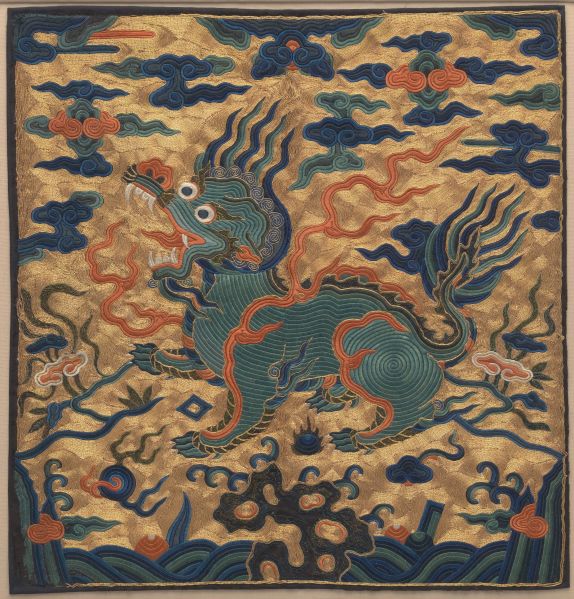 Qing dynasty rank badge with stylized bear embroidered with peacock and metallic threads. Courtesy of The Metropolitan Museum of Art

The resulting exhibition is part classroom and part exhibition: At the center of the room is a vitrine filled with wool and silk fibers – yak, horse, sheep and cow-tail, an iridescent peacock feather, silk ranging from shimmery cultivated silk to coarse tussah silk – what the curators call their reference material. These animal fibers are juxtaposed next to photos of the fiber under a microscope, which are surprisingly beautiful images in their own right, resembling a mound of golden coins. The microscopic images depicting the cross-section of the fibers and its morphology are the exhibition equivalent to a behind-the scenes tour.

Compared to the Met’s typical shows, the space devoted to this exhibit is decidedly small. It is in a room that hardly deserves that title; the anteroom to the Museum’s Ratti Textile Center (where the museum’s textile collection is housed). To get there, you must walk straight through the entrance of the Museum to its Medieval Art Wing. Before you’ve entered the room with the towering choir screen from the Cathedral of Valladolid, turn to your left and descend a stone stairway. 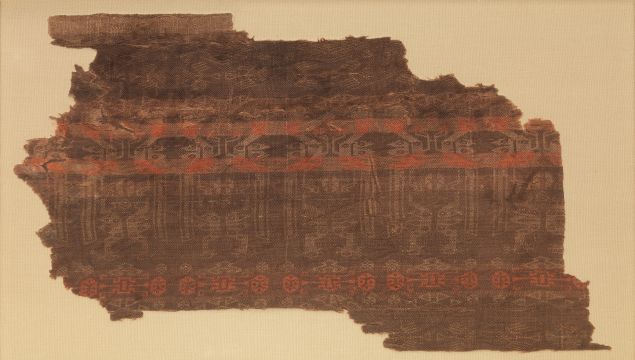 Chinese textile fragment with stripes and confronted birds, 425-221 B.C. Courtesy of The Metropolitan Museum of Art

Despite it’s compact size, the greatest strength of the exhibition is its ability to confer the importance of fibers through storytelling. The textiles shown in tandem with the fibers give a kind of backstory. Because each textile was woven, embroidered or sewn with specific fibers, the choice to use horsehair over cow hair is a specific choice of availability or affordability. The reasoning behind these choices is a mystery we could only imagine the answer to.

Take, for example, the magnificent Chinese silk ceremonial robe. While most imperial robes were lined in ermine or mink, this one is lined in cat fur, which was significantly less expensive. Sparking the question: was this woman of the court impoverished, but still yearning to fit in? Maybe she was fashion-forward and wanted to look different in a sea of expensive pelts. Consider a helmet-shaped Tibetan monk hat made of wool that is topped with, of all things, cotton. Or perhaps the Korean gat (top hat) will pique your interest, as the warp (vertical part of weave) was made of brown horsehair, while the weft (horizontal part of weave) was made of cowtail, and the whole thing was brushed in fish glue to give it a sheen. 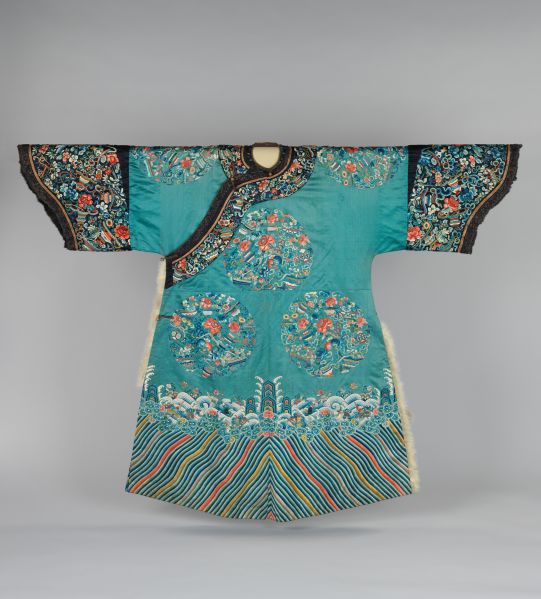 Highlights include gossamer-thin, shimmery 19th-century Indian shawl made from Shahtoosh fibers from a Tibetan goat, whose fibers are so small and thin (approximately 10 micrometers in diameter) that the threads normally do not have the strength to withstand weaving. Textile fragments, including the 2,000 year-old Chinese piece (the oldest in the Met’s collection) encapsulate the extent of human ingenuity before modern innovation. Using a technique that was so labor-intensive and complicated that it was discontinued nearly a thousand years later, the weaver created multi-color stripes and birds. It’s a masterpiece; a fragment of humanity’s ability to control their world even with rudimentary tools.

In a world where consumers have become increasingly aware and concerned about the origin of their clothes, where even fast-fashion retail giants not known for their dedication to sustainability have pledged to find sustainable alternatives to their production practices, an exhibition of this kind is particularly timely. And it’s no wonder, then, that even though the exhibition is placed in a room that is often deserted, the first installment (on plant fibers) attracted scores of viewers. This second installment, with its beautiful fragments and costumes, will probably attract more. 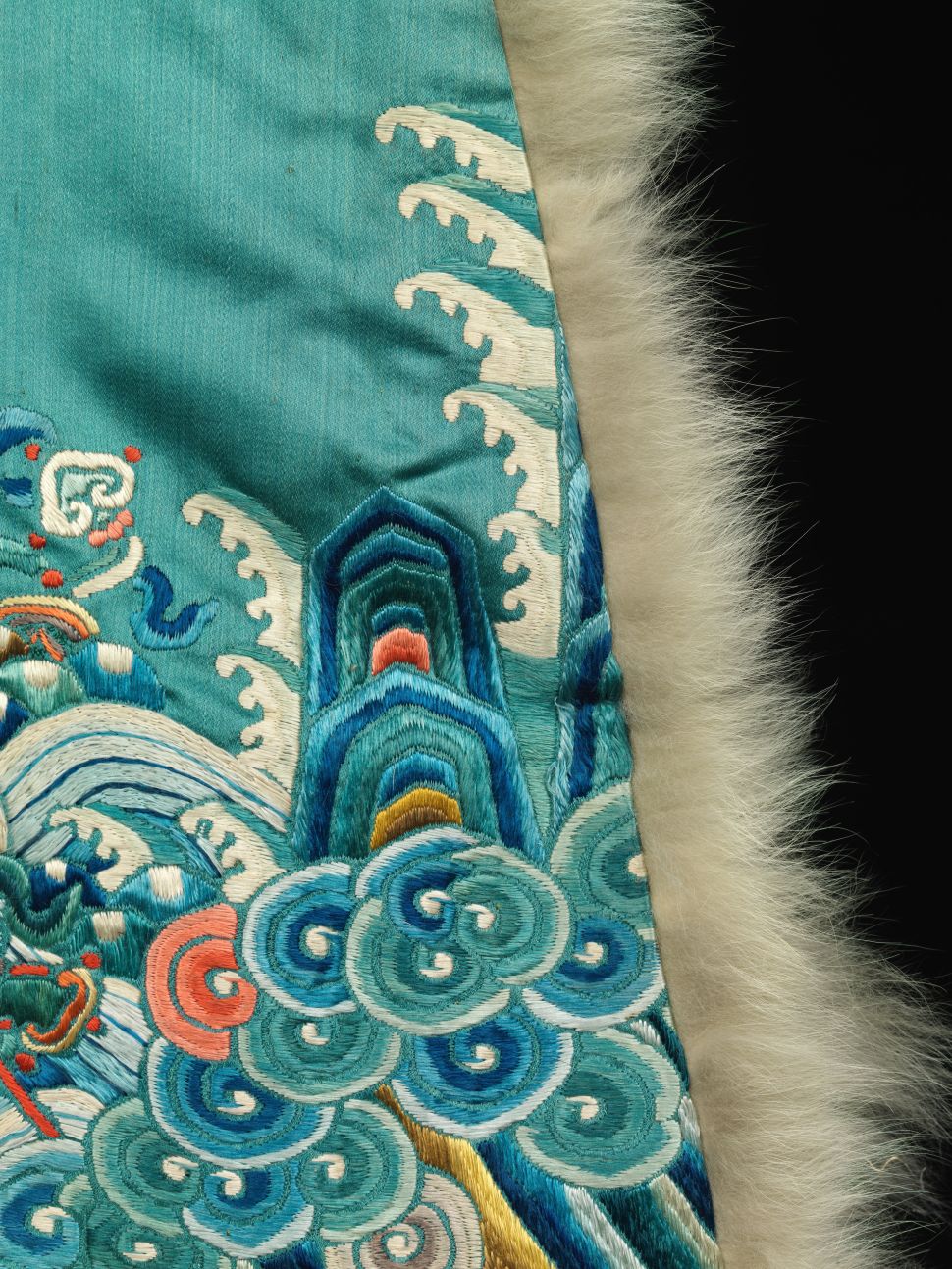