The Jewish ultra-Orthodox media is facing a sex scandal that is unique to them. It centers on the US presidential campaign. The problem is not political platforms, policies or promises. The problem is that one of the people fighting to be the most powerful leader in the free world happens to be a woman.

The ultra-Orthodox, or “hareidi” press, has always prided itself on being family-friendly—not dissimilar to the evangelical Christian media in the United States. That definition, however, is taken to the extreme and excludes all photos of women. Even women’s names are not published.

So what happens when you are an ultra-Orthodox media platform and one of the most important stories of the year revolves around a woman? How do you cover the US presidential election when one of the candidates is named Hillary?

The answer depends on where you live. While the American and Israeli “hareidi” press usually present a united front, this election is different. In Israel, there has not been a single photo of Hillary Clinton. In fact, they have never even mentioned her first name. She is referred to only as Clinton. In the United States the media has broken with their own tradition and they are using not only her name but also showing photos.

When Clinton served as secretary of state, the press in ultra-Orthodox communities skirted around the issue by writing about “the State Department” rather than the woman who led the department. And on that fateful day when President Obama ordered the assassination of Osama Bin Laden and gathered his senior echelon in the war room deep in the bowels of the White House, it was as if there was no Hillary. The whole world saw the now-famous photo of the US president in the corner and his senior staff and generals hunched over the table. In Israel and in the US in the “hareidi” press, only Hillary Clinton disappeared.

She was Photoshopped out.

And when terror rocked Paris with the attack on Charlie Hebdo headquarters and on a Jewish supermarket and world leaders gathered together, locking arms, to walk the streets of Paris, the “hareidi” press ran that famous photo, but excised the image of chancellor of Germany, Angela Merkel, who was positioned in the front row, arm-in-arm with French President Hollande and close to Israeli Prime Minister Benjamin Netanyahu.

One way Israeli ultra-Orthodox media manages to cover the election is to refer to the female candidate with her last name only. She is simply referred to as Clinton. And when they do include photos, they often use a shot of her husband, or a photo of the White House.  They are not shying away from the election itself, just the name and the picture.

Interestingly, one of the reasons for excluding women’s pictures and images is the protection of modesty, a core value in the hareidi community.  Well, you might be thinking, Hillary is the epitome of modest dress. Pants and pant suits only. No cleavage. No leg.  Nothing outlandish. But there’s a catch.

The ultra-Orthodox community, in both the United States and Israel, believes that women should not wear pants or any male clothing.  It is a violation of the Biblical prohibition found in Deuteronomy 22:5.  ”A woman must not wear man’s apparel nor shall a man wear women’s clothing for whoever does these things is abhorrent to the Lord you God.” This is a powerful statement.

Back in 2006, Clinton was was scheduled for a visit with the Satmar Rebbe. No one appeared before this esteemed figure in pants. And Hillary never wears skirts. A last minute resolution was reached and Hillary wore a long raincoat over her pants. Problem solved, photos taken—and shown everywhere except in the press that the followers of The Rebbe read.

Correction: An earlier version of this article mistakenly reported that Hillary Clinton met with a prominent Lubavitcher rabbi in the 1990s. 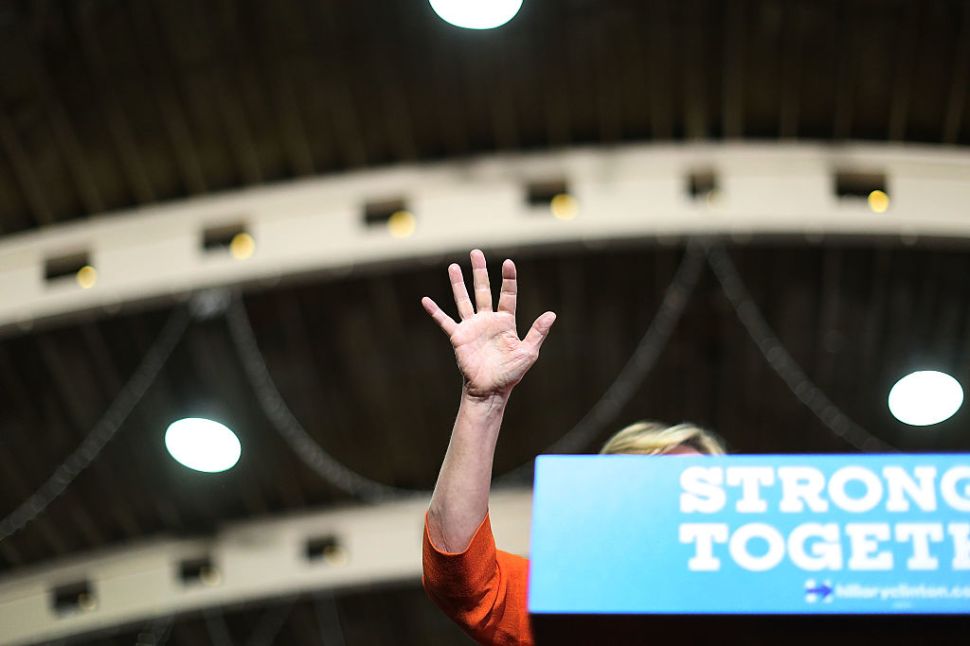