For the past 70 years, since the end of World War II, the United States has enjoyed air superiority in every combat engagement and conflict this nation has encountered. That superiority was hard-earned between 1941 and 1945, and maintained since through lives, treasure, effort and ingenuity.

But we can no longer take that air superiority for granted. Troubling new revelations expressed by the new Air Force chief of staff cast doubt on just how long the U.S. can rule the skies. Air Force Chief of Staff Gen. David L. Goldfein, speaking during the “State of the Air Force” address at the Pentagon this past week said, “I believe it’s a crisis: air superiority is not an American birthright. It’s actually something you have to fight for and maintain.”

The Air Force is short 700 pilots—up from a shortfall of 511 back in March—and that number is expected to grow to 1,000 in the near future. In addition, the Air Force needs 500 more drone pilots and some 4,000 aircraft maintainers.

‘I believe it’s a crisis: air superiority is not an American birthright. It’s actually something you have to fight for and maintain.’

The demands on the Air Force are significant: there are pilots flying missions in Syria, Iraq, and Libya against ISIS, and in Afghanistan against the Taliban. Strategic and deterrence flights are flown off the coasts of China, Iran, and North Korea, and training exercises with NATO are ongoing. Drone pilots, who typically work 13- to 14-hour days, are mostly engaged in intelligence, surveillance and reconnaissance missions. But some drone strikes keep the operational tempo high.

The Air Force is also charged with maintaining two-thirds of the strategic nuclear triad: ICBMs and the Strategic Air Command, while the Navy operates its ballistic missile submarines. The Air Force is also responsible for the Space Command, joint cyber operations and heavy airlift capabilities. In short, it is a heavy responsibility that has been made heavier by budget sequestration.

“While each military service can make a legitimate claim for additional resources, no service faces a greater challenge than our Air Force,” former Air Force Chief of Staff Gen. Norton A. Schwartz told the Observer. “Operational demands are intensifying: Iraq, Syria, Afghanistan, Libya, Yemen and multiple other locations. Seriously needed modernization of existing equipment is underway: F-35, KC-46 and B-21 with significant nuclear mission requirements just now coming into clear budgeting focus. And, the secret sauce of our force—our airmen and their families—deserve a reasonable quality of life that matches the demands and sacrifices of their profession.”

People are the most important element in any military force, but technology counts as well. The average age of Air Force planes is 27—about the same age as many of the pilots who fly them. However, the original lifespan of most combat aircraft is 20 to 30 years. That means scraping for parts and more downtime for maintenance. Some fleets, such as the B-52 bombers and the KC-135 tanker fleets, are more than 50 years old.

Yes, the news media have accurately reported problems with cost overruns and delays on such projects as the F-35 joint strike fighter; and whether it is an effective replacement for the A-10 Warthog. But people have been held accountable and the number of planes ordered slashed to reflect the increased cost. Significantly, the F-35 is a fifth-generation plane and is essential to maintain air superiority over Russian and Chinese aircraft. Pravda brags that only Russia has deployed fifth-generation fighters, while China boasts its FC-31 Gyrfalcon is every bit the F-35’s match.

The general’s position is echoed by Congressman J. Randy Forbes, chairman of the House Armed Services Seapower and Projection Forces Subcommittee, who told the Observer: “Like the rest of our military, the Air Force is dealing with near-term readiness challenges and a shortfall in funding for strategically critical modernization programs. Simply put, this administration has not been providing our airmen with the resources they need to fight ISIL today and deter high-end conflict tomorrow without wearing out the force.”

Events around the world demand our vigilance and our involvement. Adequately equipping and training our troops must be our top priority. 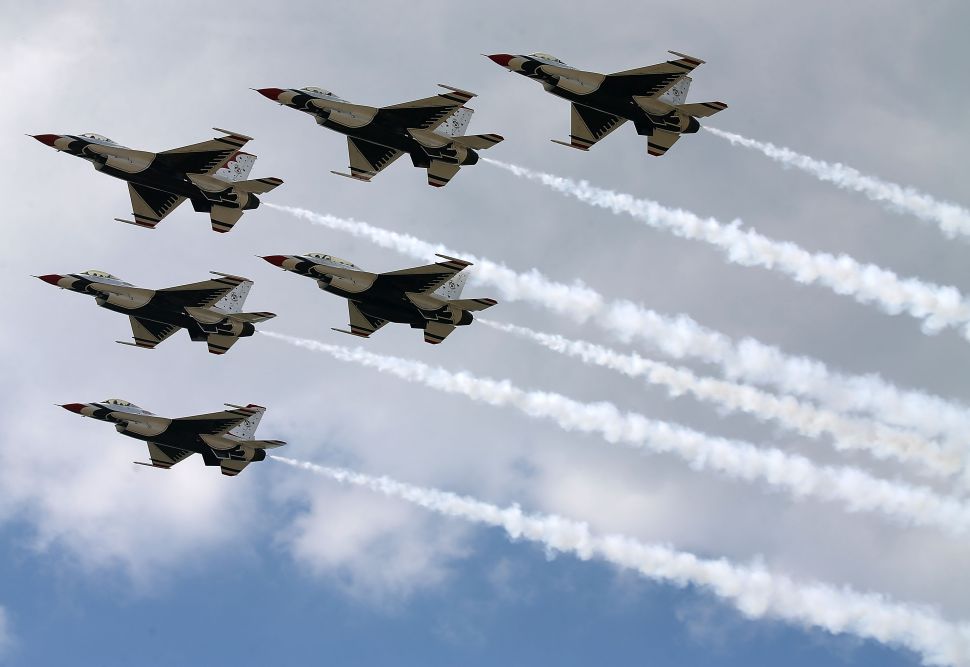