Now in its 50th year, Aspen’s Anderson Ranch Arts Center—a sprawling property in Snowmass, Colo.—features more kilns than horses, despite its rustic sounding moniker. In fact, the tally is 19-0, at latest count.

The Ranch boasts a talented group of art educators in lieu of wranglers, and kale salads and quinoa cakes instead of chili and sirloin. While there’s plenty of green space and a simple feel to the wooden buildings, most visitors come for the public talks or the top-notch art facilities and equipment. The Ranch has become a destination for art enthusiasts of all stripes and origins—collectors, practitioners, gallerists, and instructors from around the world, many of whom fall into multiple categories.

Earlier this July, New York-based artist Holly Hughes taught a painting workshop at the Ranch called “Staking Out the Terrain”—a title that resonated with the setting. Her students included a roller coaster designer from Copenhagen, one of the Ranch’s former board members and a recent MFA graduate from California College of the Arts.

Over Hughes’ years of involvement with the Ranch, this kind of classroom diversity has become standard. “The groups here would contain anyone from a fabulously successful retired architect who has an incredible visual skill set but [is] not necessarily a painter to people who are finishing grad programs,” Hughes said. During the year, she teaches more uniform groups of young aspiring artists at Rhode Island School of Design.

Hughes’s husband, New York University Professor of Museum Studies Bruce Altshuler, accompanied her. He wasn’t teaching, but enjoying trout fishing in the nearby Gold Medal waters. That week, Hughes attended a ceramics opening at Harvey / Meadows Gallery (run by longtime Ranch faculty member Sam Harvey) in town and partook in another local tradition unavailable to east coasters: visiting the Aspen pot store. “We don’t get off the plane and say ‘where are the gummy bears?’” she said. “But we do go visit. We don’t have that in New York. It’s fascinating.”

Midway through the week, New York based artists Fred Tomaselli and Tom Burckhardt offered critiques with Hughes’s students. While at the Ranch, they gave a public talk about their own artistic processes that many of Aspen’s community members attended. The next day, collectors Eleanore and Domenico de Sole spoke in the same room, this time packed with many of their friends and fellow collectors. Artist Tom Sachs was also literally running around the Ranch. Dressed in athletic wear, he preferred sprinting to walking across the lawns. At the end of the week, artist Lynda Benglis was to speak at the Aspen Art Museum, where an Alan Shields exhibition was on display. Shortly after, photographer Catherine Opie would arrive at the Ranch as a Featured Artist, yet another of the Ranch’s programs to bring internationally renowned practitioners to the campus. Opie would be trying her hand at ceramics—the Ranch encourages cross-disciplinary work and experimentation.

“You know, Tomaselli, Burckhardt, Tom Sachs, Alan Shields show, Lynda Benglis in a week? At a place in the mountains somewhere? It’s amazing,” Hughes summed up. Whether it’s marijuana, fishing, or art that you’re after, the Ranch and its surrounding region have it all.

With a cafeteria, residential housing, an onsite gallery, and 24-hour studios, though, the Ranch also features enough amenities that some might never want to leave. “It’s like living on a commune in some ways,” said Liz Ferrill, an artistic director of the Ranch. She has taught at universities and shown her own work internationally and has her own studio at the Ranch.

Throughout the summer, instructors teach weeklong workshops, like Hughes’, in a variety of disciplines: ceramics, photography and new media, digital fabrication, furniture design and woodturning, painting and drawing, printmaking and sculpture. In the fall and the spring, the Ranch hosts a small group of artists-in-residence, selected by outside jurors, for ten weeks at a time. The January Studio Concentration allows artists to immerse themselves in the studio for three weeks.

No matter when an artist visits the Ranch, Director Nancy Wilhelms ensures that the communal atmosphere persists. “Our residency is community-based, and when you come here, you become part of our community. If you want to go in your mole hole, you are in the wrong place.” Wilhelms exudes enthusiasm and energy—a chipper blonde woman with a perpetual smile, she transitions easily between speaking to collectors at a benefit dinner and eating meatballs in the Ranch cafeteria.

“People have moved here because of Anderson Ranch,” said Wilhelms. “This is a community that keeps growing. It’s becoming a very strong valley of artists all the way from Glenwood Springs to Independence Pass. We’re very connected in terms of what we do and how we support each other. We really work to be involved in and supportive of the local artist community.”

While housing prices in downtown Aspen aren’t quite amenable to most artists—emerging or established—Wilhelms notes that the area is “like any regional center where you can have a really expensive pocket, and then as you go out from that the costs may go down.” Down valley, in Basalt and Carbondale, artists can rent studios, live comfortably, and access all that Aspen has to offer. There may be no subway, but there is fresh air, mountains, and endless opportunity to enjoy nature. If the local buses don’t run as frequently as the L train, they do provide much better views.

“The setting is magnificent. You can’t help but be inspired by it,” said Wilhelms. She noted projects at the Ranch that took inspiration from the region’s nature and history—one delved into the underground mining tunnels in Aspen, another studied the flows of the Colorado River. People sometimes come to the Ranch with one project in mind and push it aside after the landscape inspires them to develop something else equally challenging and stimulating, Wilhelms said.

Wilhelms has been with the Ranch for four summers. If she represents a fresh, new vision for the place, associate director Doug Casebeer represents its long history as a resource for the international art community. With a thick gray mustache and glasses, he exudes a certain steadiness—part scholar, part frontiersman—that compliments Wilhelms’s effervescence. In his 31st year of running workshops at the Ranch, Casebeer can easily recite the place’s origin story, how a developer in the 60s told a group of local artists that they could work on the land. “The deal was that the developer said, as artists you can come in and work as long as you want. Once you leave, it’s over. Well, the artists never left. We’ve been here ever since.”

The roller coaster designer in Hughes’s class, Will, spoke to me about what brought him to the Ranch. As an undergrad at RISD, he studied painting under Hughes. He moved away from painting for a while and began working in design. He described his week at the ranch as “a way of rediscovering painting.” “Even in preparation for coming to a course here, I started making a lot of new work,” he said. “It sort of excites you. You want to push yourself and get pushed. Since February I made 48 new pieces.”

While I was speaking to Will and Hughes in wooden chairs on the lawn outside a studio, Jim Chaffin, the husband of the former board member in Hughes’s class, walked by. Chaffin, a Colorado-based real estate developer, once owned Anderson Ranch’s land. His wife, Betsy, convinced him that Ranch should own the land itself. Since 1979, it has. Situated off a downward sloping gravel road, the Ranch is just far enough from town to feel like a bohemian haven, but still a short drive to the Aspen Art Museum and galleries downtown.

Digital fabrication intern Elazar Abraham left New York, where he was freelancing and teaching digital art to kids, to spend the season at the Ranch. He quickly summed up the Ranch’s appeal. “Look where you are,” he said. “You get to play with all these toys, be with all these people.” What more do you need? 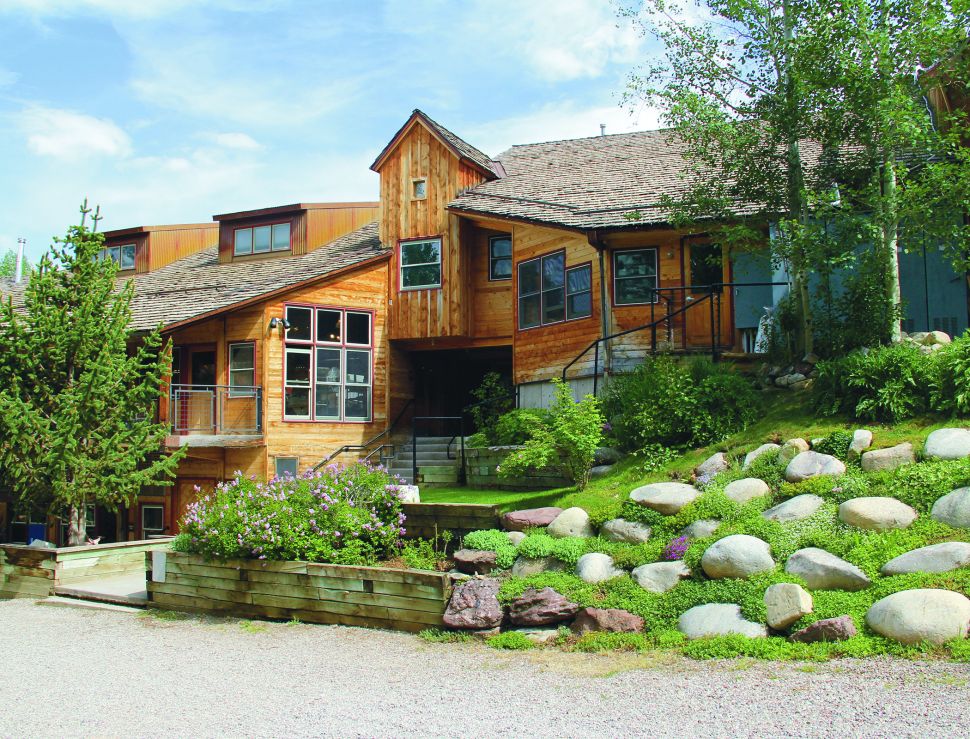