The magical and enchanting Kosmischer Läufer: The Secret Cosmic Music of the East German Olympic Program 1972 – 83 Volume III is possibly the best album I’ve heard all year (move over, Let’s Eat Grandma; I had thought you had the top spot aced until I heard this).

This triumphant, all-instrumental collection of (mostly) synthetic baubles, bubbles, hums, whistles, and moonscapes may also be one of the 10 best Krautrock albums ever released. It’s so good that it’s largely irrelevant that it’s the fruit of a well-executed hoax.

That is pretty goddamn remarkable: although music history is rife with genre reproductions and pranks, I can think of none that could totally stand alongside the work they honor, and which would still be fascinating to a listener who didn’t “get” the joke.

Here’s the official back-story of Kosmischer Läufer: The Secret Cosmic Music of the East German Olympic Program 1972 – 83 Volume III (FYI, Kosmischer Läufer means “Cosmic Runner”). Apparently, it’s the third volume of recently rediscovered/re-released music someone named Martin Zeichnete produced to help East German athletes train for the Olympics during the 1970s (Volumes I and II were “re-released” in 2013 and 2014, respectively). According to the official bio, “Like many young East Germans of the time, (Zeichnete) would listen furtively to West German radio at night and became infatuated with the Kosmische Musik or ‘Krautrock’ epitomised by the likes of Kraftwerk, Neu! and Cluster emerging from his neighbouring country. Martin, a keen runner, hit upon the idea of using the repetitive, motorik beats of this new music as a training aid for athletes.”

Let’s assume that there is (next to) zero possibility that this wonderful tale is true. Let’s also assume that this delicious album does not lose a fraction of its greatness because it is a fake.

Often, these serve to display how enormously clever an artist is (for example, insufferable Todd Rundgren’s insufferably insufferable yet impressive Beatles’ recreation, Deface The Music; Klaatu’s entertaining but dated prog-psych spin on Fab Faux-ism; or XTC’s excellent psych-rock alter ego, The Dukes of Stratosphear). Other times, these recreations are done purely for comic effect (consider the Rutles or Spinal Tap).

Genre recreations best succeed when an artist is attempting to seamlessly channel a genuine love for the energy and artistry of another era, as Billy Childish did with Thee Milkshakes (who released a dozen albums of passionate, period-perfect recreations of early Mersey and Brit freakbeat), and more recently, Omni’s nearly flawless attempt at making a completely plausible slice of herky-jerky Brit post-punk.

Rarely are these genre replications fantastic records in their own right (though Omni came damn close). But Kosmischer Läufer: The Secret Cosmic Music of the East German Olympic Program 1972 – 83 Volume III (which I shall henceforth refer to as KL V 3) raises the bar dramatically: it’s actually equal to the very best of the genre that it’s attempting to imitate.

(Note: Kosmischer Läufer is likely a Scottish musician/label entrepreneur named Drew McFadyen, though I am not 100 percent certain about that, and no else seems to be, either.)

It would be a mistake to consider KL V 3 an homage to the entire krautrock genre. Krautrock encompasses a rather huge variety of music, from the ambient metal of Ash Ra Tempel to the rubbery angst-jazz of Can to the hippie prog-punk of Amon Duul II, and many etceteras. Rather, KL V3 is a pastiche of three specific albums: Harmonia’s Deluxe (1975), Cluster’s Zuckerzeit (1974), and Neu!’s Neu! 75 (1975). If you are familiar with those three (truly) classic albums, you pretty much know what you’re getting on KL V3. To both understand and appreciate the accomplishments of this album, it’s worth reviewing the archival work it’s based on.

On Zuckerzeit, Cluster attempted to make a sweet, almost bubblegummy version of the German synth-dream future (Zuckerzeit means “Sugar Time”). These simple, highly melodic, lightly throbbing radioactive nursery rhymes are like a child’s version of the House and electro revolt to come.

Harmonia’s Deluxe explores the tension of melody, technology, and rhythm, all done with a light, sweet hand; a dreamy yet tense album (imagine an electro mash-up of the Velvets, Satie, and Meddle-era Floyd), it is so utterly likable that you forget how completely original it is. It is the soundtrack for a child’s playroom in a planetarium with just a chalk outline of a noise and tension, and a pastoral edge that was virtually unique to Krautrock at the time.

Neu! had made two albums prior to Neu! 75; each of these are essential and contain moments of near-incomprehensible brilliance (“Hallgallo,” the first track on Neu!’s 1972 eponymous debut, is probably one of the 10 most important rock songs ever recorded). But both Neu! and 1973’s Neu! 2 are erratic, and even the most avid fan will find themselves skipping tracks. However, Neu! 75 is consistent and satisfying, alternating dreamy protopunk, piano landscapes of great delicacy and melodicism, and frantic, metronomic pieces of visionary power. Neu! 75 is the most fully realized and satisfying album by one of the most original and influential bands of all time.

Conceptually, stylistically, and sonically, KL V 3 is largely indistinguishable from the trio of albums listed above; it aspires to the grace and buttery, burping melodicism of Harmonia and Cluster while also seeking the verby majesty of Neu! 75.

KL V 3 also features much smaller nods to ’74 – ’81 Kraftwerk (notably in the very occasional use of synthesized vocals, and a few distinctly Kraftwerk-esque melodic lines) and La Dusseldorf (a band led by Neu!’s Klaus Dinger), who had a sound that married “Sister Ray”-like three-chord repetition with lovably saccharine football chants.

It also must be underlined that more than anything, KL V3 is a tribute to the extraordinary melodic grace and musical invention of Hans Joachim Roedelius, a prime member of both Harmonia and Cluster. Throughout his entire career, Roedelius (who is still active at age 82) combined a Satie-esque ear for melody with a Robert Oppenheimer mind for invention. More than any one person, Roedelius pioneered modern ambient music, and he so deeply influenced Brian Eno that it is impossible to think of Eno without acknowledging the debt he owes Roedelius.

But KL V3 is far, far more than a spot-the-influence treat for Krautrock geeks, and the album goes from strength to strength.

With its mixture of earthly hummability and alien atmospherics (and an almost Brian Wilson-esque framing bass line) “Fur Seelenbinder” will be one of the most beautiful and haunting tracks you hear all year (presumably named after Werner Seelenbinder, a legendary German Wrestler of the 1920s and ’30s who was persecuted and eventually executed for his refusal to support the Nazis); “Der Traum Des Mädchens” is a gorgeous undersea adventure that morphs into a knit of melody, pulses, and sighs; “Der Traum des Jungen” is a effervescent, nodding march offset by a bird-like high synth melody; “Unterwasser” is a shimmering, (very) Roedelius-esque breath of autumn sunlight reflecting off of ; and “Anfunkt im Stadion/Das Rennen” (“Arrival at the Stadium/The Race”) is precisely that, perfect monumental stadium-entry music.

I’ll say this again: KL V3 is so much bigger than the “idea” that conceived it.

It’s also easily the best of the three Kosmischer Läufer records so far (Volume I is terrific, but somewhat limited in musical scope; Volume II is erratic, and at times comes precariously close to going off plot and merely sounding like an album inspired by the era, not “of” the era). But on Volume III, Kosmischer Läufer has made a grand leap: not only have they produced an album that is completely indistinguishable from the “real” thing, it’s also the only Kosmischer Läufer record that undeniably passes the “still amazing even if you’re not in on the joke” test.

I would also be remiss if I didn’t mention that KL V3 is an extremely pleasant manifestation of Ostalgie.

Ostalgie, which is rampant throughout exceedingly hip Berlin (but with pockets throughout the Western World), is the desire to celebrate the fascinating and unique cultural traits of the former East Germany. I have fallen prey to it myself: I can listen, almost endlessly, to the deeply evocative eight-tone identification chime of the long-gone DDR’s Radio Berlin International, and imagine the strange, foreign and forbidding world it emanated from.

Do you have to know Krautrock to love Kosmischer Läufer?

Absolutely not. This makes it virtually unique amongst the category of genre replications (for instance, imagine loving the Rutles if you had never heard the Beatles).

To a novice, I suspect KL V3 will sound like a vastly inventive, adorable, rapturous, bubbling, hooky cotton-candy coated space-age adventure, too anchored in structure and melody to be exotica, too intimate to be dumb and danceable, and so sincere and engaging that one would never suspect that it’s part of a hoax. 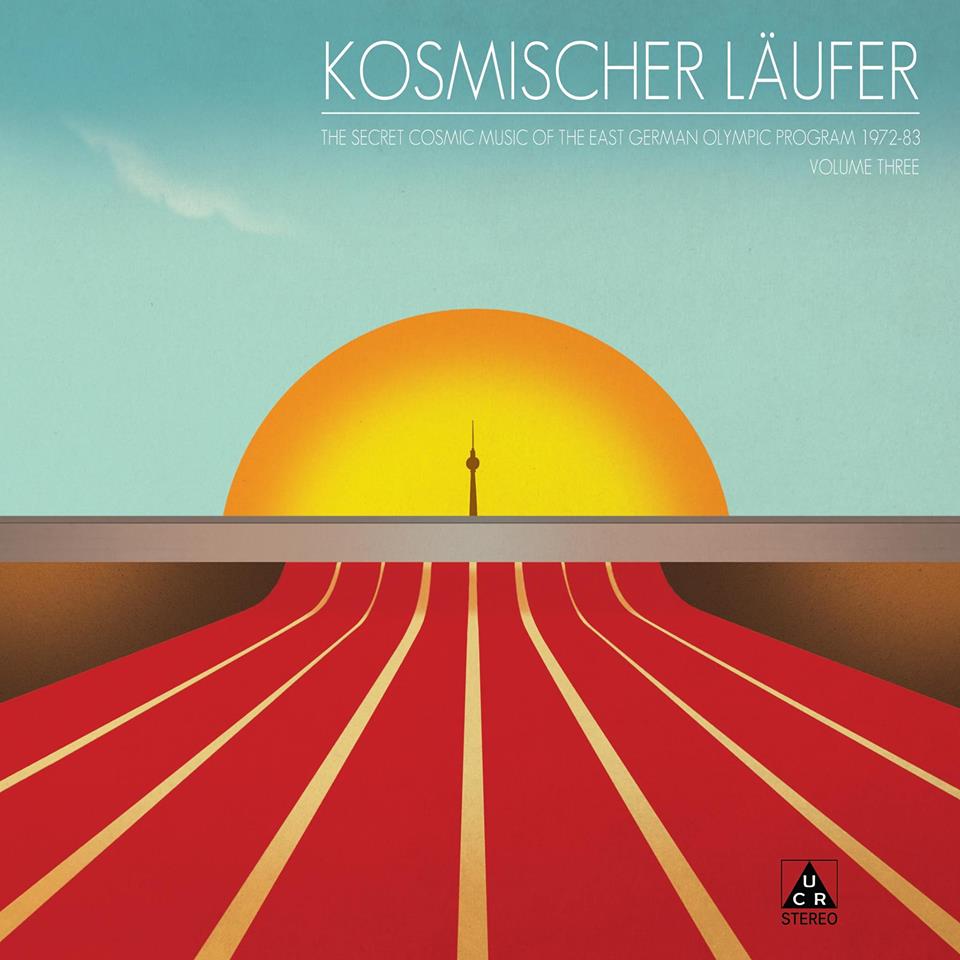