“There’s a Barry’s pretty much right downstairs, so it’s perfect,” cooed one model manager on a recent evening at the pop-up restaurant du moment, Casa Cruz, established by jet setting restauranteur Juan Santa Cruz. In addition to this temporary eatery, there are permanent counterparts by the same name in London and Buenos Aires. Casa Cruz at Spring NY is accessible by invitation only, and housed on the 6th floor of Spring Studios at 50 Varick Street. The space has never played host to any type of eatery. It’s most often used by creatives for editorials and big brands for look books, and during fashion week as a runway show venue. By digital standards, Casa Cruz flies so under the radar that an Instagram geotag doesn’t exist, and guests are discouraged from taking photos.

Mr. Santa Cruz has a talent for filling a room with the powerful and attractive. Jessica Chastain and Jenna Lyons have mixed seamlessly in recent weeks with lesser known artists, models, and of course, actors. “Actors are the most fun,” Mr. Santa Cruz told me with a laugh as we sat in the lobby of the Mercer Hotel. “They like to have fun.” It all came together rather serendipitously since the newly opened Spring Place co-working offices and Casa Cruz share mutual investors. “We built it out in 4 days,” Mr. Santa Cruz said raising his eyebrows. “I wanted everything to be right, so we brought in everything from London – the silver, place settings, oil lamps, cutlery. It’s as much of a copy cat as possible of what we have in London and Buenos Aires.”

What started as a white concrete cavern is now a plush cube clad in emerald velvet panels. “I immediately saw it – how I wanted to set it up, and play out, and who would be there,” added Mr. Santa Cruz. “I drew a sketch of it in 20 minutes, and sat down with a builder and said, ‘This is what I want.’ New York efficiency made it happen. We took two and a half weeks to build everything out, and spent 4 days putting it all together in the space.” Among his numerous visions was a towering faux oak tree covered in twinkling lights in the center of the space, as well as a resident DJ, David Katz, whom he met at a Christmas party in Chile. When the whirlwind installation was finished on June 28th, he planned to keep the restaurant open for just 20 days. However, it shows no signs of stopping. “We want to grow some firm feet here, and open a more permanent space” Mr. Santa Cruz added. “I’m quite excited, but for now we want to stick around for some important moments in September.” 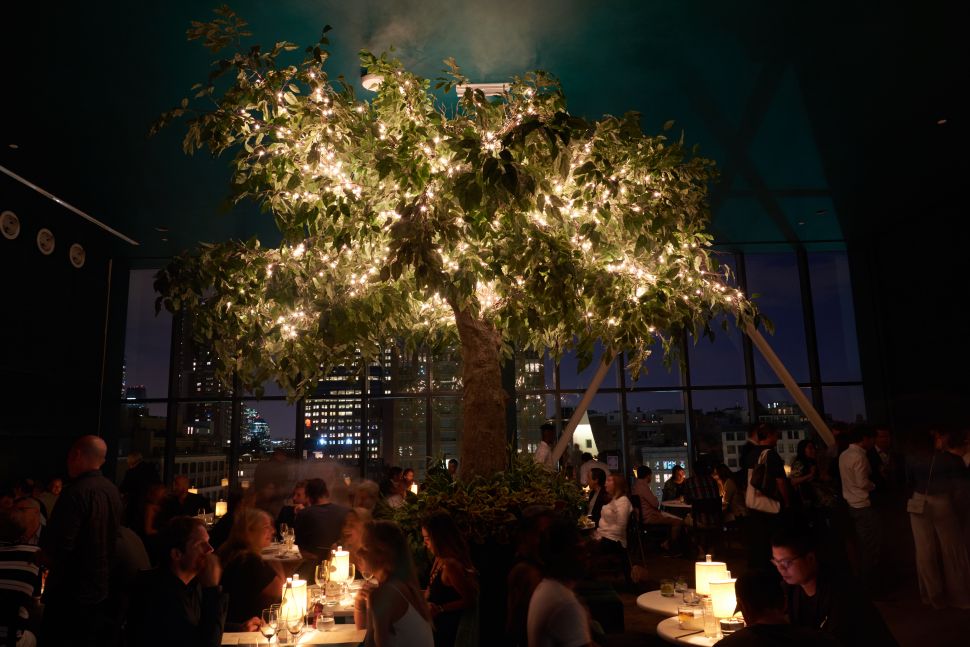