In twenty minutes on the phone with Thomas Middleditch, the fast-talking actor and improviser lapsed into the voices of no fewer than half a dozen characters he created. He imitates Bachelor contestants, audience members at Harry Potter and the Cursed Child, boring actors on talk shows—all as naturally as if he were talking in his own voice, or at least, as naturally as if we were joking around with one of his closest friends and not a stranger across the country who just called him to record everything he’s saying.

If you don’t already recognize Thomas Middleditch from his starring role on HBO’s acclaimed Silicon Valley (for which he was nominated for an Emmy),  in a few years you’ll be recognizing him as that guy who’s in everything. Now, he’s starring in Jeff Baena’s newest indie comedy, Joshy, as the titular Joshy who’s still gathering with his friends for a would-be bachelor party after a tragedy. Joshy, like his Silicon Valley character, is a nice boy who never prepared to become anything other than the sidekick. The same might be true for Middleditch—nice, funny, and talented: an unlikely, but inevitable leading man.

OBSERVER: So you watch Bachelor In Paradise!

MIDDLEDITCH: I love it. Best show on television.

What else are you watching?

I just finished Stranger Things and I loved Baskets. You know, I also watch Game of Thrones and all of the big ones, but I DO love The Bachelor, The Bachelorette, and Bachelor In Paradise.

Who did you want JoJo to pick this season?

Jojo! Laughs. I honestly, I think, like most people on that show are just the antithesis of me, so it’s like always an okay, sure.

You know what’s strange about that show? They all come out of the limo, and they’re all super attractive—guys and girls—they’re all models, and you’re like, what do they have trouble finding people? Why are they so lamenting about their singlehood? And then you meet them.

And then you’re like, oh yeah, that’s why. You’re all narcissistic weirdos who haven’t done any introspection whatsoever.

Yeah, they don’t really seem to have hobbies or interests.

I thought Kaitlyn was fun—her season. I like Jubilee—she just got kicked off Bachelor In Paradise.

Lot of girls are like the girls that, if I see out, I try to avoid. They’re like a Nick Kroll, or Jenny Slate character.

Luckily you’re don’t have to deal with that anymore! How’s married life?

Married life is the same as dating life, except now you have a ring, and the state of California has a vested financial interest in the outcome of your marriage. But outside of that, it’s the same thing.

I saw from Instagram that you two went to see Harry Potter and the Cursed Child! How was it? You a big Harry Potter guy?

I’m not so much. I’ve watched the movies and that’s about it. My nerdy pursuits are more like video games, Dungeons and Dragons, stuff like that. But [my wife] Mollie was raised on it. It was pretty impactful for her. she really enjoyed going to it. It’s undeniable that it’s, like, six hours of theatre, but I got to admit, I found myself, by the end of it, wanting to know what happens next!

I’ve seen the movies all kind of multiple times because those movies always get put on TV and then you end up seeing them again. The funniest part is, when you watch those plays, they reference such and such a character, or this and that thing that happened, and people are gasping.

That honestly was the most entertaining part for me. Just witnessing—the fans love Harry Potter.

That was a lot of theater. #keepthesecrets

It also looks like you’re best friends with Patrick Stewart…

Oh yeah, we’re BFF. I know P-Stew from this improv comedy show I’ve been doing for over ten years called The Improvised Shakespeare Company. We were born out of Chicago and now there’s a core group of us playing at the Largo twice a month in Los Angeles. The show tours—the cast is actually really big but we manage to have the core members here in LA. And at one point, Patrick Stewart—at one point he sat in for a mini-thing, and we asked him to play, and he’s played a handful of times now. And through that, I don’t know. We just happen to get along. Age aside, I think we’re quite kindred spirits to be honest. I really like him!

Is he good at improv?

For someone who’s never gone through longform improv training, he’s great. Obviously he gets the Shakespearean thing, and I want to be fair, some of the Patrick Stewart shows, he’s running around ripping people’s imaginary dicks off, and we’re covering for him like, “Ehhh, Mr. King! King Learius, what are you doing?”

Honestly the cooling part for him, for someone who’s been in the game for so long, who’s probably experienced so many things, comedy is relatively new for him. He started kind of with Extras, and doing straight up comedy on stage I think, outside of a Much Ado of Nothing, comedy in the sense of “Oh, Shakespeare was a hoot!” A bunch of red wine drinkers all trying to open up a Shakespearean dictionary to get the jokes. But I think he’s really enjoying it. It’s fun to see that spark.

I couldn't resist another. Get this @variety issue and check out the interview because dammit, how cool is that?

Speaking of improv, from the trailer, Joshy looks pretty improved.

Oh, it was entirely improvised. I mean, we had a script in the sense that we had like fourteen pages of like, this is what happens in this scene and this is what happens in the next scene, so we know where the movie is going, but in terms of dialogue and what action happens, we kind of go through the whole scene and then take it apart. And that’s how we made the whole movie. We shot it in twenty-five days or something.

And the cast—Adam Pally, Aubrey Plaza—people you were also in Search Party with!

We’ve all done some stuff. I think when you go in, with film or television, you want to tell this narrative. And with Joshy, you want it to be grounded with moments—it’s not like, everyone be as funny as you can, quickly, at all times! It’s not like that. You have to pick the right improvisers. You just have to make sure everyone is willing to build scenework as opposed to just saying the funniest thing all the time.

Joshy is, I think he’s the. I had to be told this, because I’m not Jewish—everyone on that film is jewish,and there is a term! Joshy is also a term for just a good Jewish boy.And that’s kind of what he is. What we see in the movie is him coming out of the woods with a pretty traumatic event and because everyone that is with him at the house at which they’re sort of having a failed bachelor party, everyone is such a bigger personality, Joshy the majority of the film takes a backseat.

You have major Jewish passing privilege.

I know! It’s so weird. I don’t know if I should—isn’t that anti-semitic? I get—by Jewish people, saying “Are you sure you’re not Jewish?” And I go, “Why do you ask that? What? Because of my curly hair and my big nose? Doesn’t that make you anti-semitic? Doesn’t that make you racially profiling someone? I mean, sure there’s my hooves and my golden purse of coins… my little horns that are clacking around, is that why?” All the time! And then you look at my last name and go, absolutely not. I’m like a WASP.

My last name is Schwartz so I’m allowed to say that without being anti-semitic at all.

Well, you were nominated for an Emmy, which means the Hollywood Jews like you! How’d you celebrate when you found out?

I was sleeping in that morning. It’s just not on my radar; I just totally assumed that would never happen. So I woke up, honestly because my dog had peed the bed. She kind of has a weak bladder and you roll the dice every time she sleeps in the bed with you. So I tore off the sheets, washed them, and I’m letting them dry, and I saw my phone had like 20 messages and I thought, oh god, someone’s dead. I thought it was bad news. So that’s that story. I was totally surprised it was good news, and then in terms of celebration, I don’t know. I think I probably had a drink with my wife at some point.

Has being nominated for an Emmy changed your life?

Okay, sort of weird question, but I’ve always wondered. You’re on so many talk shows—is it stressful having to come up with so many charming, funny anecdotes on demand?

You know, what, now it IS a source of anxiety. For the first round of talk shows it was like, Great! I’ve had ideas in the bank for a while, let’s go! And now, since I am such a dull person I don’t come up with fun, exciting stories all the time. Each year, maybe yields one half-mediocre story at best, or if I have great stories, and someone’s on the phone asking me, “So what’s cool?” AS IF I’ll be able to recall that one cool thing.

It’s like having to do those horrible freshman year icebreakers saying one interesting fact about you.

I will say I hope to never do one of those boring actor stories: un-relatable, unfunny. Like, I’d rather chat about a bunch of things me and the host think are funny than be like, “Let me tell you this great story. So I was shooting in Milan, and the guide, he didn’t know where he was going, so were lost, and it was just like Stand By Me!” Who cares. Who cares.

If that happens when you’re Emmy WINNER Thomas Middleditch….

Yeah, I mean, as soon as I’m an Emmy Award Winner all bets are off.

Anything else you want to add? Any hilarious stories about being lost on fancy movie sets?

No. Just, you know, respect animals and the planet. And don’t vote Trump. Just end this article with #MakeAmericaWhiteAgain.

Joshy is out in theaters today. #MakeAmericaWhiteAgain 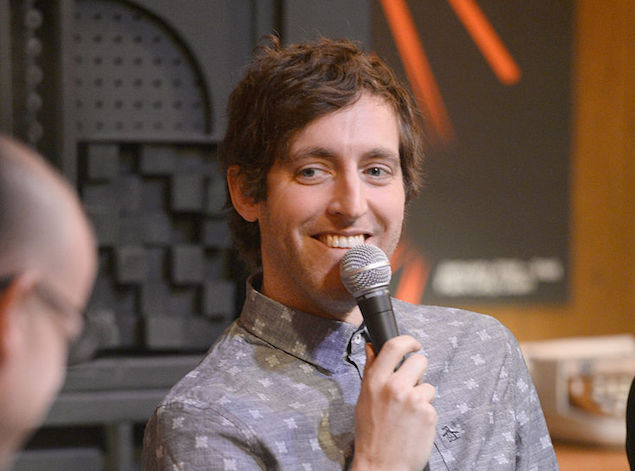