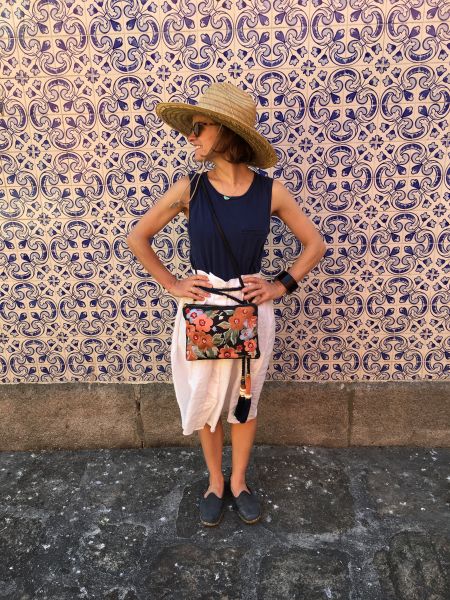 Often one of the forgotten locales of Europe, Portugal is having a resurgence. Dozens of five-star hotels have opened up across the country, and the fashion set is flocking to its shores (think designers Lisa Marie Fernandez and Thaddeus O’Neil). Here, Kathryn Fortunato, co-founder of the jewelry label Lizzie Fortunato, shares her guide to the destination. 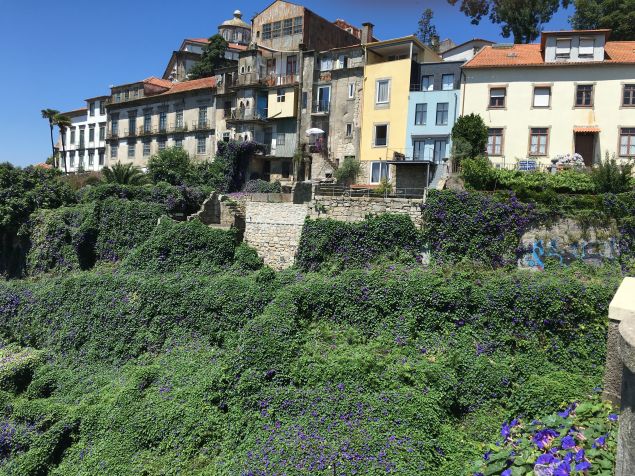 A stunning view of Porto, from a bike tour (Photo: Courtesy Kathryn Fortunato)

We flew into Porto, Portugal’s second largest city (which isn’t saying much, it feels small and is very easy to navigate). At the end of the Douro River, where it reaches the Atlantic, you can see many beautiful boats sailing up the river for day trips or longer cruises into the heart of the Douro Valley–one of Portugal’s most famous wine regions. It’s the home of “Port” wines and is incredibly scenic, especially the old town Ribeira which is a maze of narrow streets and hundred year old houses along the river. It’s so fun to get lost wandering around there. 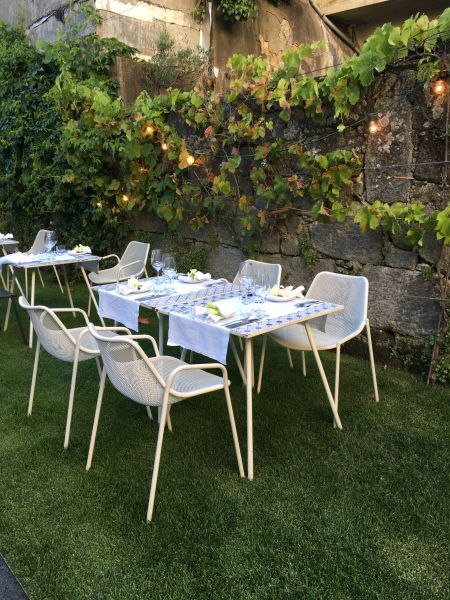 Where to Stay:  Rosa Et Al Townhouse, a restored townhouse with six suites and tons of charm. It’s owned by a brother/sister duo with amazing taste who have decorated each room in a minimal, mid-century style. They’re known for their fantastic kitchen (book dinner at the hotel’s back garden one night, it was a highlight) and their weekly cooking classes. Their in-room spa services are apparently incredible (though I didn’t have time for one, was too busy exploring) and their gift shop in the lobby is like Lizzie Fortunato’s Fortune Finds of Portugal: all the soaps, tiles, cards, olive oils and port wines you need to collect to prove you visited the country. I was so impressed by the service at Rosa et Al; upon our arrival we were served fresh juice and sat down to discuss how to make the most of our few days in Porto.

Where to Eat: Lunch of meats and cheeses (and wine, of course) at Mercearia Das Flores, a quaint little spot in the middle of the bustling Rua das Flores. Dinner at Cantinho Avillez, a casual outpost from renowned Portuguese chef Jose Avillez; his primary restaurant in Lisbon is a two Michelin Star recipient. Lunch at Adega São Nicolau where we sat outside for a gem of a lunch listening to live music, drinking Vinho Verde and eating the most incredible fresh prawns I’ve ever tasted. 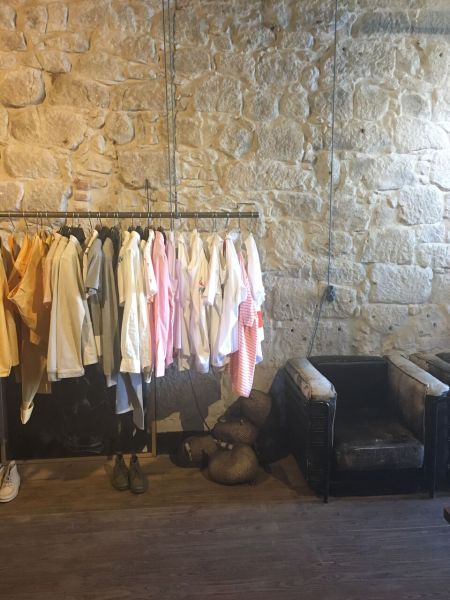 Where to Shop: We stumbled upon La Paz in the Ribeira neighborhood, a menswear store that would feel equally at home in Brooklyn as it does in Portugal. My fiancé Nick was immediately absorbed in great button down shirts and fall bomber jackets, while I picked out fishermen’ sweaters for him to buy, so that I could steal them.

Best Kept Secret: A bike tour! We booked a private bike tour through our hotel and got to see so much more of the city than we would have on foot. We cruised through the fancy local neighborhoods, explored Parque da Cidade, Porto’s Central Park where local Portuguese walked their dogs and did their daily exercise, cycled along the Porto side of the Douro river as the morning fog cleared for the daily bright blue sky and up and over the expansive Dom Luís I Bridge for incredible views of the city. We finished our tour with sparkling rose and Iberian ham sandwiches while basking in the sun. 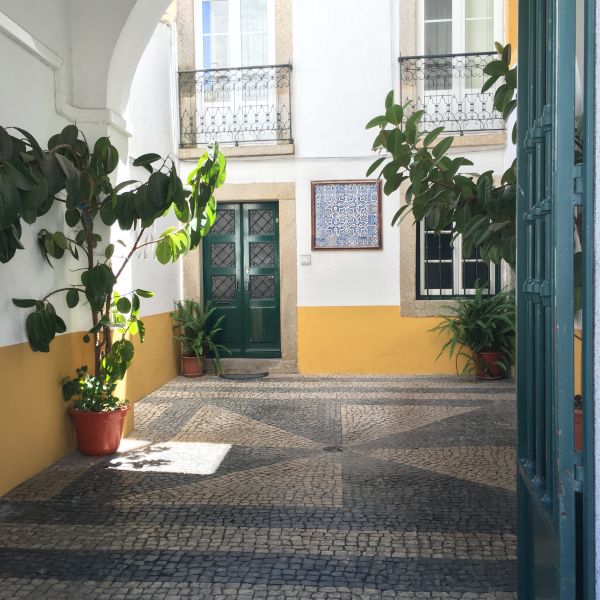 Spotted in the town of Evora (Photo: Courtesy Kathryn Fortunato)

We rented a car and headed out of Porto to drive three hours southeast, to the tiny town of Arraiolos in the Alentejo region of Portugal. The drive was beautiful, through fields of cork and olive trees, which are two of the region’s main exports.

Where to Stay: Villa Extramuros was our favorite abode from the trip. It’s the brainchild of Parisians Jean-Christophe Lalanne and François Savatie who relocated to the area after 20 years in Paris to create “a contemporary villa, decorated with furniture and art from the 1950’s until today, and with a Parisian twist.” The villa was so relaxing; it almost made you not want to leave! The contemporary space was filled with Parisian treasures, including beautiful furniture, artwork and hundreds of art, design and decor magazines in piles everywhere, perfect for perusing over breakfast or by the pool. Long breakfasts were served in a beautiful courtyard, gelato was available poolside and the bathroom products were exclusively Aesop. It was a luxurious experience in a really beautiful (and simple) setting. 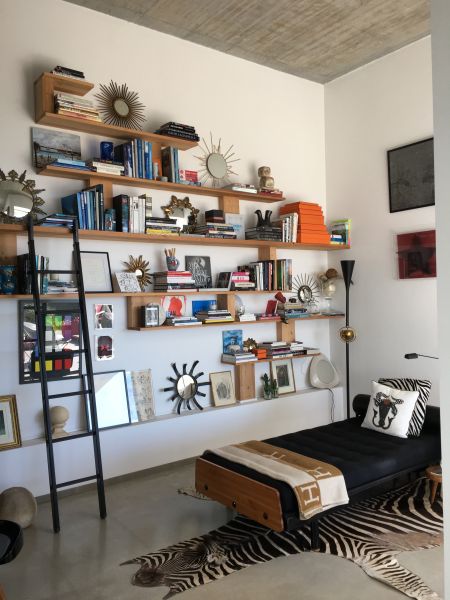 What to Buy: Handmade espresso cups and the local olive oil made from the olive trees on Villa Extramuros’s property.

Where to Eat: Restaurante Típico O Alpendre. A small, local restaurant in the little town of Arraiolos, just a five minute drive from Villa Extramuros. We were treated to Iberian ham, olives, quail eggs, fresh bread and olive oil before the meal even began. Starters and main courses and a bottle of wine for two came to about 50 euros.

What to Do: Explore the town of Evora where the medieval old city lives on from the 14th century. Every town has to have its sceney restaurant, so if you can stomach the wait (people apparently line-up before it opens) check out Botequim da Mouraria for lunch of traditional food and wine at a nine-person counter. 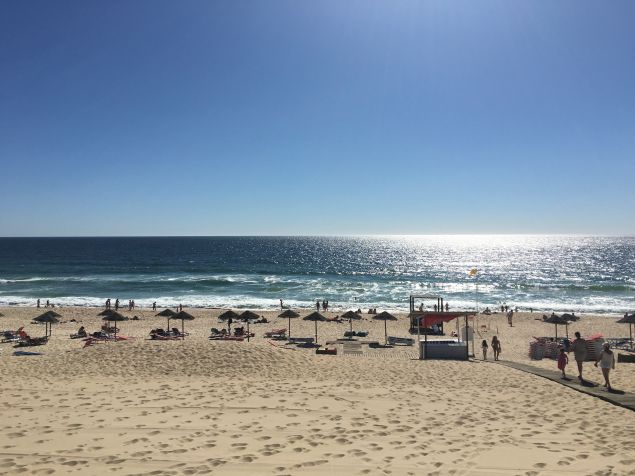 About an hour south of Lisbon, Comporta is a chic but cool beach town along Portugal’s Troia peninsula. It’s a windswept, beautiful coastline that feels like a secret, off-the-beaten-path destination for the European jet set. 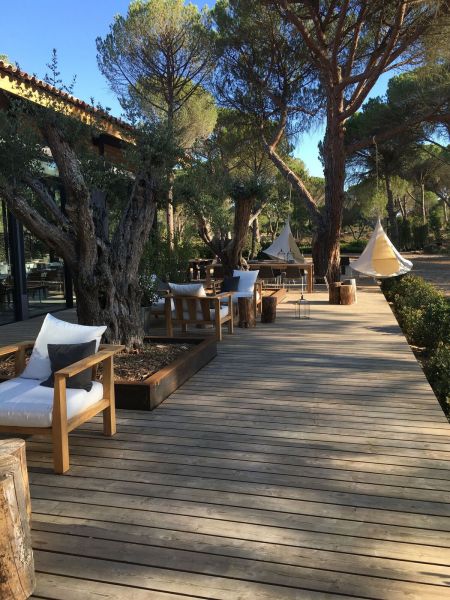 The Sublime Hotel offers a peaceful oasis only minutes from the shores of Comporta beaches (Photo: Courtesy Kathryn Fortunato)

Where to Stay: Sublime Hotel Comporta. I had heard about Sublime from a few friends before we started organizing our trip. Although the hotel has been around for two years as a relatively small property, they have just expanded with additional standalone cabins equipped with your own plunge pool and kitchen. It feels like adult summer camp in the best way possible: rooms in the woods, minutes from the beach, beautiful pool and fire pit, exquisite restaurant and eating area. But despite the luxury, it blends in with the rustic landscape.

What to do / Where to Eat: Hang on the beach at Praia do Pego. This was the beach closest to our hotel and there was no reason not to spend the entire day here. Restaurant Sal is the only structure on the beach and renders all other restaurants obsolete: the rosé was crisp, the clams tasted as they’d been caught that morning, the sea bass was the best I’d ever tasted, and the people watching was perfection. We also loved dinner at Dona Bia where we drank more Vinho Verde and ate more fresh seafood, that trend didn’t get old. 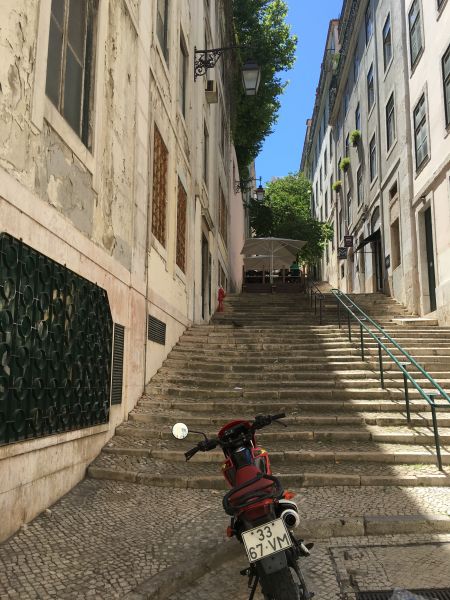 Our next destination was Lisbon, the capital of Portugal, where we were meeting friends for our last weekend in this magical country. The drive up the coast from Comporta was easy and beautiful (like all of the driving in Portugal) and included a 12.3km stretch over the Vasco da Gama bridge, the longest bridge in Europe!

Where to Stay: Baixa House Gorgeous apartments in an 18th century building in the heart of Lisbon’s downtown area, it felt like home away from home (if only our apartment in New York had such high ceilings and European charm). Baixa has all of the perks of a hotel without being one: the rooms are cleaned daily, the refrigerator is stocked with juice, yogurt and breakfast supplies, and fresh bread is left at your door every morning. 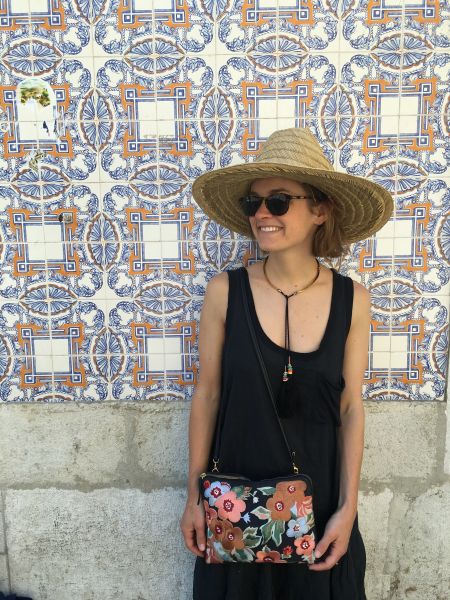 Where to Eat: Our first lunch in Lisbon was at Taberna da Rua das Flores. Four of us ordered everything on the menu and loved the intimate spot where the wine flowed and the food felt incredibly local. Cervejaria Ramiro has become more renowned after it was featured on Anthony Bourdain’s No Reservations, but it’s still considered among locals to be the best seafood in Lisbon. They don’t take reservations so everyone lines up outside. The weather was beautiful and we ordered beers while we stood in line, so the 20 minute wait didn’t matter much, plus, the food was so good. What the restaurant is missing in charm it makes up for in taste.

Where to Shop: A Vida Portuguesa for beautifully packaged soaps, incredible woven blankets from Alentejo, and other hand-crafted, tasteful Portuguese home goods. Fabrica Sant’ Anna, the storefront of a 275 year old ceramic factory where you can buy handmade tiles and other ceramics. 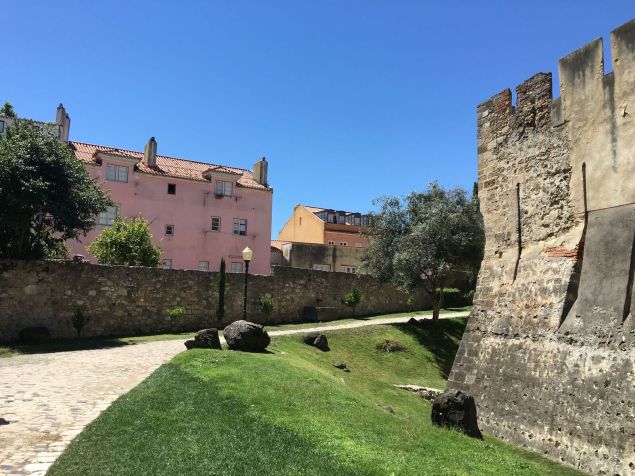 What to Do: Explore the Sao Jorge Castle, a Moorish castle overlooking Lisbon. The walk up is worth the views and the ruins date back to 2nd Century.

What to Do: A guided tour with Sandra from No Map Tours to the towns of Sintra and the beach town of Cascais. Sintra is home to Pena Palace, a Romanticist castle that combines a multitude of architectural, artistic and religious influences; the result is a Disneyland-esque palace. Exploring the castle, manmade gardens from the 18th and 19th centuries and historic town with Sandra—a fantastic historian fluent in a multitude of languages—was an absolute treat and is not to be missed.

Favorite Neighborhood: Principe Real. This feels like the Soho of Lisbon, a well-appointed neighborhood with concept stores, home stores, well heeled locals, and a plethora of bars and restaurants. We ate our last dinner in this neighborhood at The Decadente, which felt like the Ace Hotel of Lisbon. 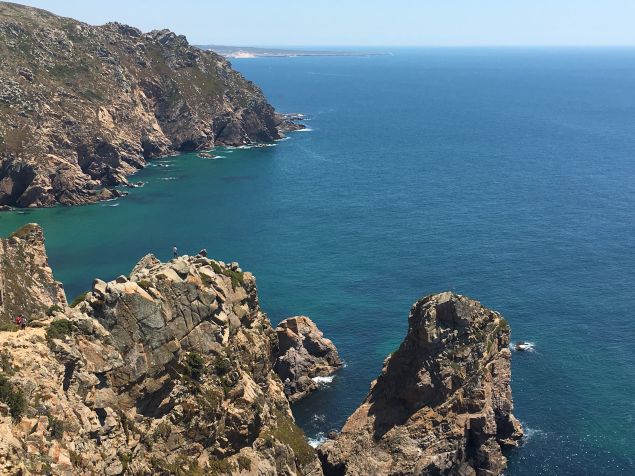 Best Kept Secret: On our way back from our Sintra day trip we detoured to Cabo da Roca, the westernmost tip of continental Europe where it was once thought that the world “ended”. The views were breathtaking and the detour was a highlight.

Favorite City: Porto, for its charm.

Local Food to Eat: Seafood, whatever is fresh and recommended was consistently A+.

What to drink: Vinho Verde. It’s a crisp white wine native to Portugal that sometimes comes in a sparkling variety (my preference). I am now lusting to find it in Brooklyn. 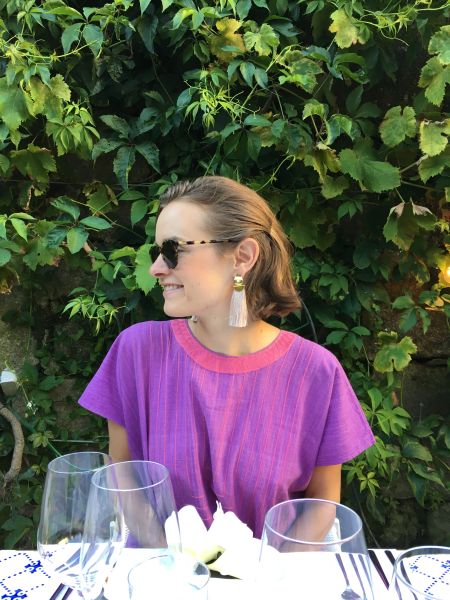 What to Pack: Light! I packed a carry-on for 10 days in Europe filled with linen dresses and skirts, Sabah shoes for walking around the city, a big straw hat to protect from the 14 hours of sunshine a day (Portugal gets 2800+ hours of sunshine per year), a new Lizzie Fortunato wrap rope belt to make any cotton dress a little fancier for evening, Ancient Greek Sandals, a Lizzie Fortunato Safari Clutch with removable strap for your essentials and plenty of statement earrings to pack a punch.

How to Get Around: Rent a car, it’s easy.

Must Buy: Tiles! And Soap! 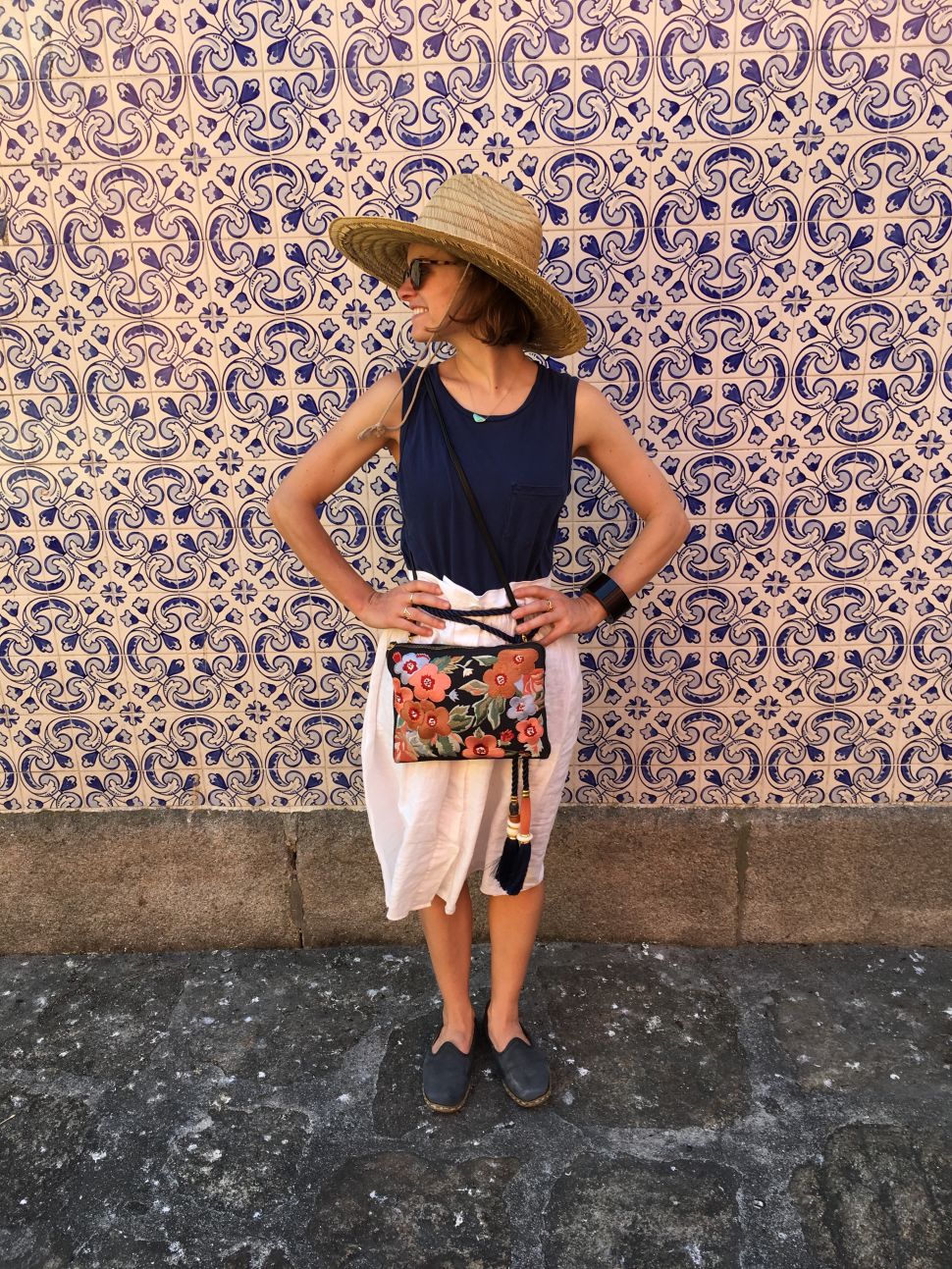