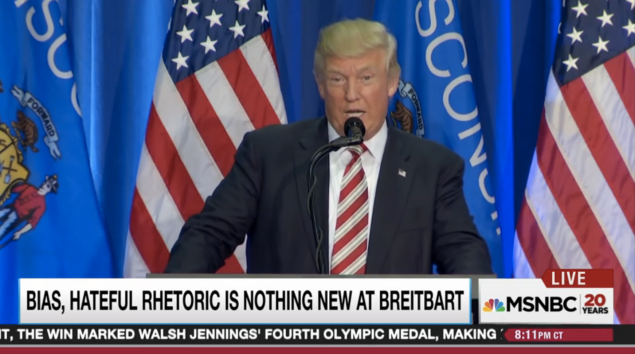 At 8 p.m. on Fox News Channel Thursday night there was no O’Reilly Factor, although it touts itself as the most-watched program in cable news for 15 years.

Instead, there appeared something more ominous than Bill O’Reilly’s “Talking Points Memo.” The screen was filled with Republican candidate Donald Trump shouting out the end of a long tirade against the Democrat Hillary Clinton during a rally in Charlotte, N.C.

This should have been a good omen for Fox’s prime time hours. Trump performed well off a teleprompter. He ranted about the usual stuff but from a more polished script. And he made a bit of news by sort of saying something he hadn’t yet said in this presidential campaign.

He almost apologized for something. But that news didn’t surface on Fox until an hour later, when Martha MacCallum—subbing for Megyn Kelly on The Kelly File—brought it up.

MacCallum could address the Trump speech because her show was live, unlike those of Sean Hannity and O’Reilly, which felt stale and canned, making no mention of Trump’s curious phraseology and show of humility.

Chris Stirewalt, generally a clear-eyed umpire, told MacCallum “The most important thing he did in his speech tonight was to use the word ‘regret.’ He almost said he was sorry . . . that was a signal moment.”

An hour before on MSNBC, Joy Reid used the word “apologized” in her short read before showing the sound bite of the night.

“Sometimes, in the heat of debate and speaking on a multitude of issues, you can’t choose the right words or you say the wrong thing,” Trump said to his audience in Charlotte. “I have done that. And, believe it or not, I regret it.”

“And I do regret it,” Trump said, “particularly where it may have caused personal pain.”

His very cloudy quality annoyed Reid, who called it a “vague Mea culpa . . . an apology without specifics.”

The conversation turned to Trump’s hiring this week of two news campaign aides who will be less in the shadows than Roger Ailes. They are Kellyanne Conway and Stephen Bannon. Pundits gave both credit for Trump’s more measured tone in Charlotte.

Conway is a veteran aide to Republican campaigns and Bannon has been editor of Breitbart, an alt-right, very white website that has distinguished itself with Jew-baiting, race-hating and love for the Confederate flag.

Reid asked, rhetorically “Is there any way to hide the alt-right bushel enough that white, college educated voters don’t notice it?”

One of her most outspoken guests was Brad Woodhouse, a Democratic strategist who viewed Trump’s performance with a skeptical eye.

“If you listened to the crowd, they didn’t even believe it,” he said. “They started chanting ‘Trump! Trump! Trump!’ He kind of smiled, like, you know, wink-wink . . . it was very tortured. It sounded like it was something he was really urged to do.”

He predicted a rivalry or worse between Conway, an inside political pro, and Bannon, a novice at politics but a success at many other things.

“I don’t understand how that push-pull is going to exist,” he said, predicting that, under pressure, Trump will “retreat to his instincts, which are Bannon’s instincts and not Conway’s instincts.”

This began a strong night for MSNBC. Rachel Maddow followed with a fast-paced and newsy hour on The Rachel Maddow Show. She did a deep dive into the consciousness behind Bannon’s Breitbart site by showing the tweets of a Breitbart editor named Katie McHugh.

“Close the borders and expel the invaders.”

“British settlers built the USA. ‘Slaves’ built the country as much as cows ‘built’ McDonald’s.”

Another of Maddow’s good items came from the official Trump campaign account of the reviews of his  “Law and Order” speech in suburban Milwaukee Tuesday, where he spoke of the African-American community—his new best friends.

The campaign insisted Jill Colvin of the Associated Press raved that “Trump sounds like he’s talking directly to African-Americans.”

“Trump sounds like he’s talking directly to African-Americans,” she wrote, “but I don’t see a single non-white person in the crowd.”

In the 10 p.m. hour, Don Lemon on CNN interviewed Michael Reagan, son of the former president, who said his father would have had better stagecraft.

“He would have had blacks peppered throughout the audience,” Reagan said. “The staging in that case was absolutely amateurish.”

In the 10 p.m. hour on The Last Word on MSNBC, host Lawrence O’Donnell chatted with anti-Trump Republican strategist Rick Wilson.

“This is a guy who cannot be tamed or mastered or controlled,” Wilson said of Trump. “It’s amazing that the American media falls for this . . . He’s a sociopath. It’s astounding.”

O’Donnell countered by noting that Trump has trimmed his availability to the cable TV media.

“At this point,” O’Donnell said, “he’s down to Bill O’Reilly and Sean Hannity.” 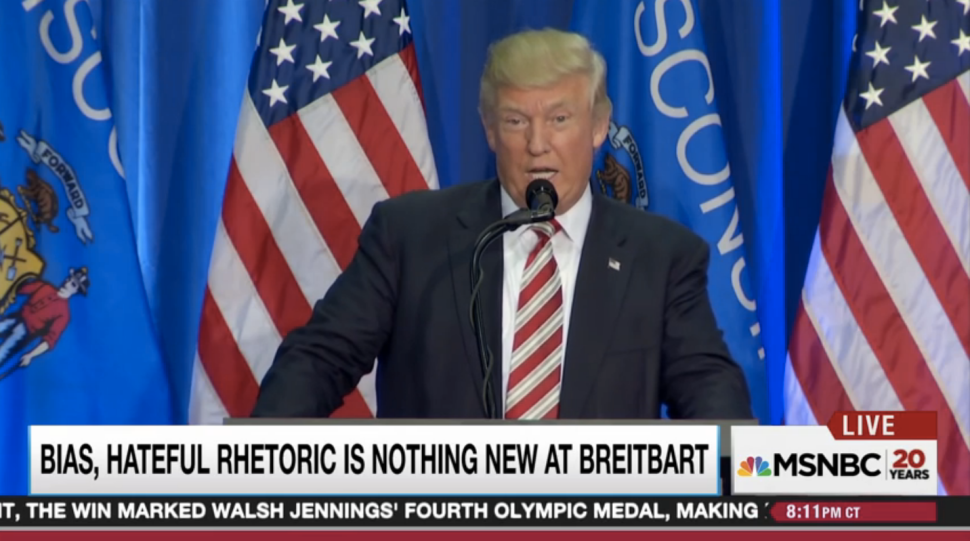