Conway appeared with Rachel Maddow on MSNBC on Wednesday for a long and lively discussion that delighted the host.

“To be able to have a conversation that covered that many different topics and was that substantive and that didn’t devolve into a shout-fest and wasn’t mean toward either of us makes me feel good about this as a medium,” a smiling Maddow gushed after their conversation.

But that all made sense. Conway, the campaign manager, is the good angel on one of Trump’s shoulders, the good cop questioning the suspect. Think of her as Dr. Jekyll.

Bannon, who hides in the shadows, doesn’t do television interviews, even though he is the chief executive officer of the Trump effort.

But he’s clearly the evil angel on Trump’s other shoulder, the bad cop who intimidates the suspect with tough questions. Think of Bannon as Mr. Hyde.

His site, he’s proud to say, is a destination for the “alt-right,” a trendy term for the racists, anti-Semites, Confederate flag-wavers and white supremacists who pollute the internet and loudly support Trump.

With Bannon silent, Clinton allowed his headlines to speak for him Thursday afternoon during a speech in Reno, Nevada.

“I’m not making this up,” she said before reading:

“Would You Rather Your Child Had Feminism or Cancer?”

And: “Hoist It High and Proud: The Confederate Flag Proclaims a Glorious Heritage.’”

Referring to Trump’s scary warnings about Muslim immigrants and Mexicans crossing the border, Clinton said Trump is bringing “prejudice and paranoia” into the campaign.

“He is taking hate groups mainstream,” she said, “and helping a radical fringe take over the Republican Party.”

‘Tell me where he was when everyone’s calling for gun control—He wrapped himself in the flag of the NRA.’

Later, Trump had a simple answer when interviewed in Manchester, New Hampshire, by Anderson Cooper of CNN.

It was the first time in a while that Trump has crawled out of his “Fox” hole to talk to another network and it was just another chapter in a bizarre week of a bizarre campaign.

On Tuesday, Trump hinted that he could be “softening” his promise to deport 11 million undocumented residents, many of them of Mexican heritage.

On Wednesday, Trump went further, hinting he could accommodate those with good records on American soil.

“Throwing them out—which is a family, where they’ve been here a long time—it’s a tough thing,” Trump told his obsequious questioner, Sean Hannity of Fox News Channel. “There’s no amnesty. But we’ll work with them.”

But Trump went back to his old, draconian promises Thursday in both his Manchester speech and in his interview with Cooper. On a CNN pundit panel, Maggie Haberman of The New York Times analyzed Trump’s flip-flopping when Cooper asked her if Trump’s immigration policy was clear.

“No,” Haberman said. “It is clear to me that he said two very different things, one to you and one to Sean Hannity. He talked about being in favor or open to a softening—his words—of the immigration laws . . . I don’t think this has clarified anything.”

Hannity’s interview was a “town hall” in a theatre in Austin, Texas. He stretched it out over two shows. As is often the case when he’s boosting his pal “Mistah Trump,” Hannity threw underhand softball questions to Trump who nevertheless interrupted him constantly.

HANNITY: “So, you’re saying there is—and you have been sort of indicating that there’ll be some flexibility. That you, originally, you had said ‘They’re all out.’ There was a big brouhaha. But you’re saying that if somebody can prove that they’ve been here, proven to be a citizen . . . But here’s the big question.”

HANNITY (to audience): “Everyone agree with that?”

The background to all this is Trump’s recent “pivot” toward African-Americans and Hispanic Americans, who tend to support Clinton by large margins.

Although speaking to mostly white audiences, Trump has been telling blacks and Hispanics that they live in squalor and might get shot if they walk down the street in their neighborhoods and this is all the fault of Democrats so why not try voting for a Republican like him?

He said Thursday he might actually go to Detroit next week with Dr. Ben Carson, a former Republican candidate who is from the Motor City.

This didn’t impress Basil Smikle, a black Democrat who said that Trump uses “every negative racial stereotype of the African-American community” in his “outreach” to blacks.

“Tell me where he was when everyone’s calling for gun control,” Smikle said on CNN. “He wrapped himself in the flag of the NRA.”

The mood was much more pleasant when Maddow interviewed Conway on Wednesday night. Both were in Maddow’s MSNBC studio in New York.

MADDOW: “I have to ask you, self-consciously, off the top, if it’s a hard decision to do a show like this with liberal commie pinko like me.“

CONWAY (smiling): “I’ve never described you that way. No, it’s a real pleasure. I did want to pass along a hello from Donald Trump.”

Maddow offered congratulations to Conway for becoming the first female to lead a GOP presidential campaign. She let Conway speak in long answers. The two rarely talked over each other. Maddow pressed on Trump’s recent statement of “regret” that was not specific.

Was he apologizing for insulting a Gold Star family? Or for mocking a handicapped reporter? Or for stereotyping millions of people for ethnic and religious reasons?

“But I do hope, Rachel, that people who feel they have been caused personal pain by Donald Trump, looked at his regrets last week in a very public forum,” Conway said. “And it’s very unusual for anybody who is running for political office to—frankly—to every say that they regret causing personal pain.”

When Maddow turned to Trump’s promise to ban Muslims from the United States, Conway said it has been revised to immigrants from countries supporting terrorism.

“But does that statement rescind the earlier statement?” Maddow asked. “It was very clear what he said in December, and he put it in writing, right? A total and complete shutdown of Muslims entering the United States. It was very clear. Is that no longer operable?”

CONWAY: “Well, I don’t think it supplants it at all.”

MADDOW: “So they both exist?”

CONWAY: “I think that—well, yes, they do, because I think it clarifies it, in terms of, well—what does this actually mean.”

Later, Maddow turned the conversation to Bannon, whose website has attacked the Republican establishment.

“He’s after John McCain,” Maddow said. “He stood up and cheered about John Boehner and about Eric Cantor. The way that he celebrated Eric Cantor losing his seat. I understand, if you’re a Republican insurgent, why that must be very exciting. But if you’re in the Republican Party, if they’re going to be responsible for a lot of the ground game and all this stuff, how could they work with him?”

Conway deflected the question to how Sean Spicer has arrived at Trump Tower from Republican headquarters in Washington to bridge the distance between Trump’s campaign and establishment Republicans.

Maddow asked Conway about the campaign’s claim earlier in the week that the Clinton Foundation “is the most corrupt enterprise in political history.”

Conway allowed that “the Clinton Foundation does some good work.”

MADDOW: “But they’re the most corrupt enterprise in political history, that’s your statement.”

CONWAY: “Apparently, you can be both.”

In answer to Maddow’s late question, Conway denied again that Roger Ailes, the former emperor of Fox News, is helping the campaign directly or indirectly, although a New York Times story has said he is counseling Trump since resigning after being sued for sexual harassment.

“They’re old friends,” Conway said of Trump and Ailes. “I mean, he’s Donald Trump. He talks to a lot of people.”

Conway and Maddow ended the 45-minute conversation with a firm handshake and pleasant words.

“Not every woman gets what we got, which is our shot,” Conway said. “And for that I’m most grateful. And I feel most blessed.”

She also hinted that she would try to get Trump to visit MSNBC.

“I know you disagree with us, perhaps, philosophically,” Conway said to Maddow. “But I hope Mr. Trump will take the seat one day. Thank you for having me on.” 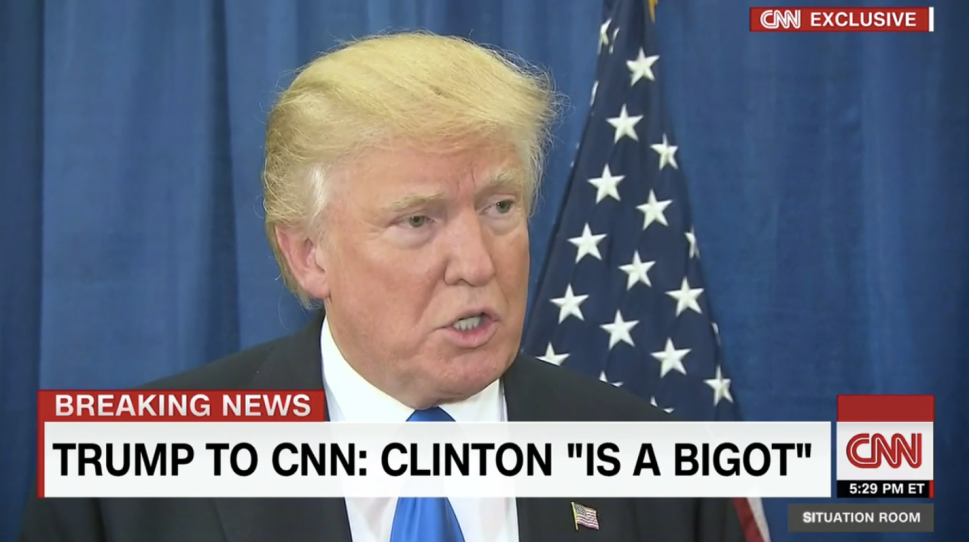