In a moment we’ll address the calculated pretzel and examine those who baked it and those who continue to distribute the twisted product via Media Privilege.

But first, The Donald’s behavior: Candidate Trump’s tangle with Mr. and Mrs. Khan deserves rebuke. The Khans’ son, U.S. Army Captain Humayun Khan, died in combat in Iraq in 2004. The Khans are a Gold Star family and Trump owes them an apology. I endorse what Sen. Tom Cotton, a veteran of Iraq and Afghanistan, said on Hugh Hewitt’s radio program, “that every American speak to Gold Star families tenderly and with respect and even love.” I served in Iraq in 2004. Cotton gently speaks the truth.

Yet—mainstream media continue to ignore Hillary Clinton’s Benghazi lie to Patricia Smith, who, in something of a political mirror to Khan, spoke at the Republican National Convention.

“I blame Hillary Clinton personally for the death of my son,” Smith said. A moment later she addressed Hillary’s lie: “In an email to her daughter (Chelsea) shortly after the attack, Hillary Clinton blamed it on terrorism. But when I saw Hillary Clinton at Sean’s coffin ceremony, just days later, she looked me squarely in the eye and told me a video was responsible. Since then, I have repeatedly asked Hillary Clinton to explain to me the real reason why my son is dead. I’m still waiting.”

Cruel? Stupid? Deserving rebuke? Yes. Clinton’s behavior reflects what criminal prosecutors call a fact pattern. The parents of other Benghazi victims have also accused Clinton of blatant lying. Tyrone Woods and Glen Doherty were both former U.S. Navy Seals. They resisted the terrorist attack on the Benghazi consulate. They were security guards, they weren’t on active duty but they died in combat, just like Captain Khan. Yes, combat. They died fighting terrorists. Outmanned, outgunned, at great odds—and calling for reinforcements.

Yet Hillary’s hideous falsehoods, boldfaced lies to grieving parents, go unrequited. Instead of ferocious outrage, mainstream media treat Hillary’s vicious misconduct with intense disinterest. Trump’s response to the Khans was stupid and rude, but Hillary went beyond stupid and rude and accused Smith of lying.

Can an astonished American jaw drop, pass through the Hell of Earth’s molten core, and express righteous indignation in China?

Much too frequently, to the point of injuring his presidential prospects, Trump “talks awful,” demonstrating an inability to differentiate between inexcusable rudeness and the New York street moxie that marks his business persona. For this rhetorical misconduct he is fairly chastised.

Hillary, however, actually “does awful.” She commits a dreadful (and at times criminal) action with calculation and an unrestrained presumption of privilege. Her dreadful action is provable, having witnesses (grieving parents), or, in the case of her national security information crime, a feckless Jim Comey discovering evidence verifying her gross negligence.

Which takes us back to the phrase “an unrestrained presumption of privilege.” After her awful deeds, so-called objective media—self-proclaimed media of record, by golly by damn—try their best to ignore her wrongs, or, that tactic failing, attempt to justify them.

In comparison, Trump faces the Khan tsunami—a genuine restraint. It is guaranteed he will face more tsunamis, throughout this election and, should he win, throughout his presidency.

Based on the fact pattern: No. At best we’ll get a drip drip drip of sighs followed by a “move on, little to see here…”

Media Privilege is a central subject in this election. The stark, evident and biased difference in mainstream media conduct wages war on honesty. A substantial plurality of the American people sensed it thirty years ago, now they know it. Truth be told, they’re sick of it.

How large is this plurality? I don’t know. I’m not sure anyone does. But they may be a majority of likely voters. Their disgust  with mainstream media bias and liberal Democrat Media Privilege are, collectively, Trump’s first election ace. This ace card is why The Donald may well emerge from the Khan tsunami—and emerge swimmingly.

Powerline’s John Hinderaker told PBS in 2007, “Anybody who’s in politics as a Republican knows that when you’re talking to a reporter, there’s probably somewhere between an 85 percent and 95 percent chance that you’re talking to a Democrat. I think that’s the basic reality.”

Out of such slime claims of objectivity still burble. Hey, in 2014 ole Dan and Robert Redford produced a movie, Truth, which continues to promote his damnable lie. The fake documents were Ole Dan’s story, not his allegation. But that’s Media Privilege with a Hollywood Privilege follow-on fraud.

Donald Trump’s genius political move was to go head-to-head with the Democrats’ Media Privilege and say To Hell! with anything the frauds threw at him—absolutely anything they threw, fraud charges or legit critique. Trump bet the mainstream media elites’ legacy of lies would dog them and theirs more than any mistake he might make. Pressure defense, baby, and pressure offense.

Donald Surber, author of the newly published book Trump The Press, understood Trump from the get-go: “His plan was simple: use the summer (2015) lull in news to dominate the cable news networks, and make the race a referendum on him.” (p.48)

According to Surber, Trump made several astute assessments based on inside experience with electronic media. Here’s Surber, at length:

“Trump copied the marketing plan that Aaron Spelling and Fox broadcasting used to make Beverly Hills 90210 a hit series. The series fin­ished in eighty-eighth place after its first season. But that summer, when the other networks showed reruns, Fox offered fresh episodes of 90210, which drew viewers and developed a following. The show moved up to forty-eighth place in its second season. Providing fresh material to the cable news networks in the summer boosted Trump’s ratings as well. He knew television better than its talk­ing heads did.”

Now for Media Privilege. Trump also “knew his audience hated the press as much as it hated Congress and both political parties. His criticisms of the press endeared him to the public. Battling the press made him a fighter, which was part of his attraction to the ignored rank-and-file Republicans: he fights.”

If you are unfamiliar with the Copperhead “Peace” Democrats who opposed fighting and winning the Civil War, here’s a War On Honesty historical bonus.

Back to 2016: Surber observed that Trump’s media strategy “was a high-risk strategy that worked because it separated him from the politicians.” Surber credits several pundits—Mark Steyn and Pat Buchanan in particular—with recognizing that Trump challenged opponents and media who would seize on any gaffe. Hark, another Civil War echo. Damn the gaffes, full speed ahead!

I asked Surber to evaluate the last 10 days of the 2016 presidential campaign. “Remember, he’s a rookie candidate,” Surber replied by email. “Trump will stick to his game plan and amend it as the campaign proceeds.”

He added, Trump “hijacked her convention. All this BS about the Russians was very entertaining to his supporters, as well as it linked the DNC emails to Hillary’s State Department fiasco.”

More: “Having learned nothing, Democrats will show her (Hillary) chirping in ads on news programs following one of his speeches. That’s what they do. That’s how they buy the ads. And it will backfire. Again. So what will they do after that? I have no idea. But so far, Trump is sticking to his game plan while amending it as he learns from the first half.”

What’s he learned? Based on his August 2 interview with Bill O’Reilly, he’s going to double down. Damn the gaffes.

Let’s return to the treason innuendo, to get a feel for the vast moral vacuum of Media Privilege Trump challenges.

As previously noted, on July 22—in what I suspect honest histories will describe as an act of political desperation—the Dems (led by Robby Mook) pivoted to Old Glory-waving display and creepy Joe McCarthyesque charges of treasonous collaboration with the Kremlin.

Alas, the Democrats are not the party of American defense and the American flag—and the American people know it, despite what the mainstream media may try to sell for the next two weeks.

In 1993 Bill Clinton press aide Dede Myers told a general serving as a deputy national security adviser that “We don’t talk to the military.” Ouch—such an awful little snit she was. In 2007, as General David Petraeus prepared to brief Congress on the Iraq surge, Dems like Barack Obama and Hillary Clinton, in collusion with their friends at Media Matters and The New York Times advertising section, warned of General Betray Us. Ugly incident, that truly vicious attack on a serving officer. Then, 2008—terrorist Bill Ayers in reprise, now buddy buddy with Barack Obama! 2009—President Obama’s apology tour. American imperialist sins committed against Muslims. Cairo speech. Peace Now! Then the Russia Relations Re-set—with Vladimir Putin.

Hey man, we’ve a fact pattern, man, not innuendo. To say otherwise is to wage war on honesty. 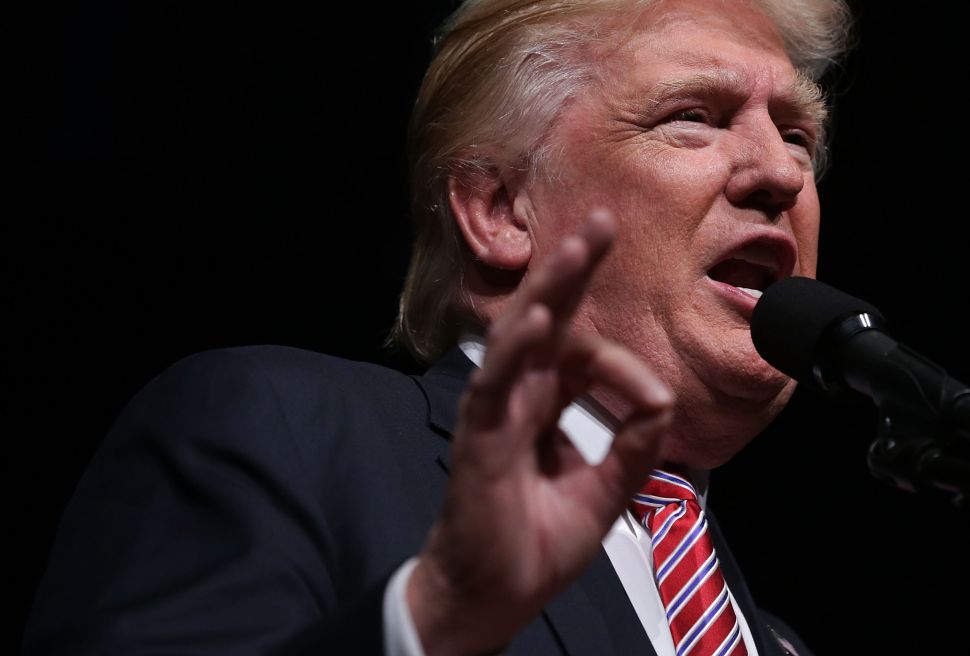