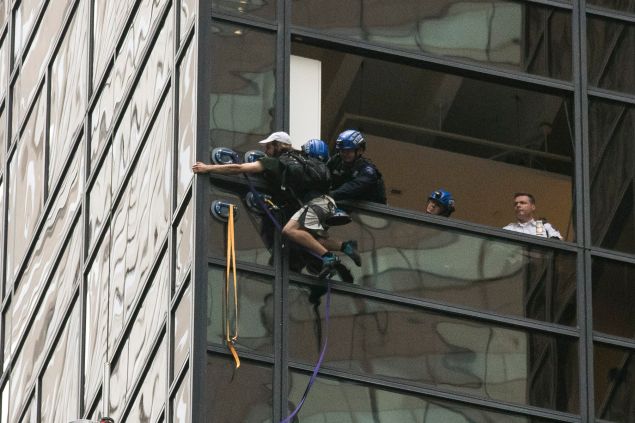 The man who transfixed the city with his attempt to scale Trump Tower using suction cups is a 20-year-old Virginian with a dual identity—and is now undergoing psychiatric analysis at Bellevue Hospital.

That’s what the NYPD revealed to reporters at a press conference outside the GOP presidential nominee’s Fifth Avenue Xanadu, where they spent three hours trying to stop the Southerner’s ascent up the 58-story building’s gilded-glass exterior. Cops said they first got word of the young man’s stunt shortly after 4 p.m., when someone reported a jumper.

With TV cameras and countless bystanders watching, police made contact with the climber through a window at the fifth floor, just above the tower’s public atrium. They repeatedly attempted to intercept him, first by sawing out several of the building’s exterior vents, then by busting a window a distance above him, raining sheets of glass just feet from where he clung to the facade.

The NYPD also deployed large airbags to cushion him should he fall.

Finally, the police devised what they described as a “very good plan” to bring a window washing scaffold up the adjacent side of the building while removing a large glass pane at the 21st story—leaving him only a narrow path to continue upward.

“What we tried to do is try to isolate and contain him to the point where it would give us a tactical advantage to take him into custody. We wanted to proceed,” said NYPD Chief Vincent Giordano. “We got to a point where his only, his only way to ascend was to go pretty much away up a two, two feet of pane of glass between the scaffold and the officers in the window.”

Giordano said police advised him that the thin strip of glass might fracture if he attempted to climb further. When the 20-year-old proceeded anyway, three officers reached out the window and seized him.

“I was waiting for the perfect time to present itself, when I thought it was safe for him and myself,” said Lieutenant Michael Lictria, who said he offered the culprit his hand before hauling him inside.

Once safely inside, Lictria said the climber did not physically resist further.

William Aubry, chief of detectives for the Manhattan South command, confirmed that a YouTube video that surfaced in the news media during the incident was in fact the young man now in custody. Aubry seemed to stress that the Virginian only sought to meet one on one with Donald Trump and not to attempt to harm him or his property.

“That YouTube video explains that he’s an ‘independent researcher’ and wanted to meet with him, and that’s the reason why he climbed this building,” Aubry said, adding that the man repeated in custody that he only sought a private audience with the candidate. “At no time did he express that he wanted to hurt anybody. His sole desire was to meet with Mr. Trump.”

Ironically, the brash businessman was in Abingdon, Virginia, this afternoon for a campaign event.

According to Aubry, the climber’s backpack contained several identifications, and he had explained to police that he had previously gone by a different name. Several outlets reported the man’s name as “Steve,” though it is unclear whether that was his birth name.

“We’re researching that—we’re looking into that. It’s part of the investigation,” Aubry said.

Aubry said police took the urban mountaineer to Bellevue’s psych ward and would arrest him and have District Attorney Cyrus Vance arraign him on the appropriate charges once the evaluation is complete. The chief of detectives also confirmed the NYPD had been in touch with the Secret Service throughout the event but said it was unclear how the climber was able to reach the height he did before authorities got notice. 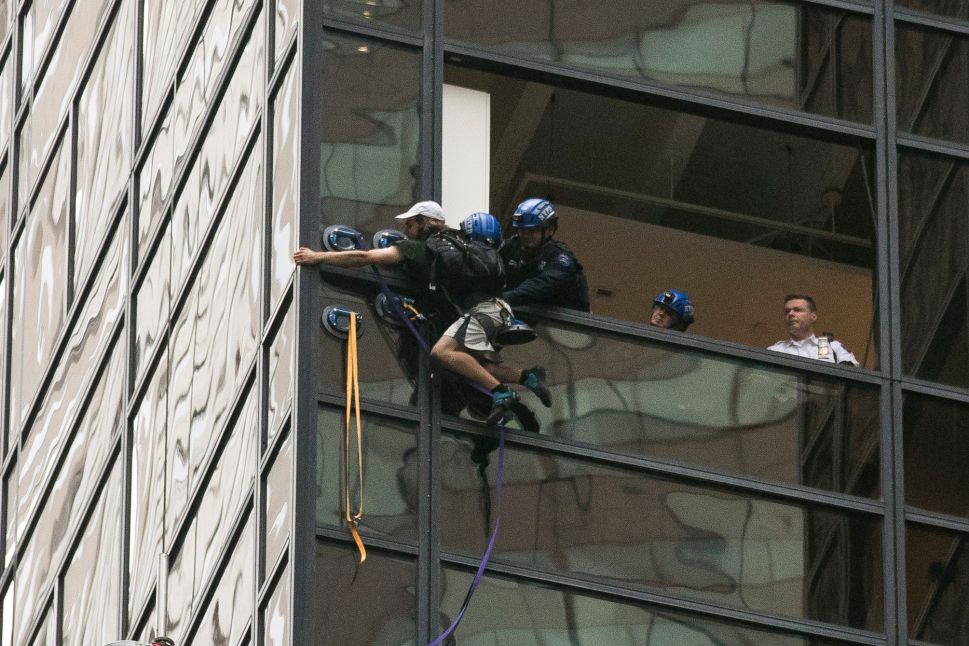