I was expecting to be offended by War Dogs—banking on it, really. That is part of the fun, one assumes, of seeing a movie in which Todd Phillips, the force behind all the amoral mayhem of Hangover movies, tells the story of how a couple of in-over-their-head stoners become international arms dealers as a result of the United States’ twin wars in Afghanistan and Iraq. But instead of outrage or any sense of shock and surprise, all the film has on offer is mild entertainment. Given the company, that feels like a bit of a miss.

To offend would require a point of view beyond “Would you get a load of this,” something Phillips and his two fellow screenwriters just can’t seem to muster. It was certainly there in the source material, Guy Lawson’s Rolling Stone article, which had the temerity to call the pair “the least likely merchants of death in history” by its third graph. No such harsh language here; that might endanger our sympathies towards these miscreant middlemen looking to make a killing, so to speak, by bridging the glut of cold war munitions in storage in eastern Europe and the emerging police forces in the Middle East looking to fire something, anything.

Even the main hook of that story—that these guys dealt with angry generals and arms suppliers while baked out of their heads—is toned down considerably, especially in the case of Miles Teller’s hero of sorts, David Packouz. (He has stopped toking by the second act and there’s no sign of his preferred means of intake from the article, the $500 plus Volcano vaporizer.) He starts the film a man adrift, working as a masseuse in Miami and trying to build a nest egg by selling high-end bed sheets to old folks homes. That changes when he reconnects with his best bud from 8th grade, Jonah Hill’s Efraim Diveroli, who has found the scam of all scams: undercutting the big boys by lowballing small government military contracts. Much of the early film is spent with the boys scouring the government bid website like a couple of Hummel collectors looking to make a few bucks flipping figurines on eBay.

Both as conceived by the screenwriters and played by Teller, Packouz is very Jimmy Stewart, meant to act as the common man to whom we are all supposed to relate. While the Whiplash star is extremely effective at this kind of acting, it is the wrong film for that kind of role; the real guy was more complicated and interesting. (There is no mention of the real Packouz’s musical aspirations, for example, though he does appear in the film playing an acoustic version of “Don’t Fear the Reaper.”) For his part, Hill once again channels Joe Pesci by way of John Belushi. His high pitched cackle of a laugh—it garnered more audience chortles than anything else in this largely humor-free film—along with his penchant for snorting coke, is meant as shorthand to indicate that his character is a bad guy. Indeed, Diveroli’s greed and lack of loyalty prove to be the pair’s downfall.

There are so many subjects here—from the toxicity of bro culture his films celebrate to the recklessness of government defense spending—that would serve as perfect targets for Phillips’ rapier. Unfortunately, he never lands so much as a timid thrust. He is not helped by his choice to lard the film with AM gold pop hits that are meant to help the medicine go down but end up just softening the film’s edge.

The presence of both Hill and the white boy marauders armed with little more than modems and cell phones bring to mind Martin Scorsese’s misunderstood 2013 masterpiece The Wolf of Wall Street. That film was also accused of having a lack of point of view in choosing to not properly chastise the morality free capitalist pigs it exposes. But Scorsese’s movie did something crucial that this one doesn’t: it told the truth as it knew it. Honesty, or at least some version of it, would have been a very good place for War Dogs to start. 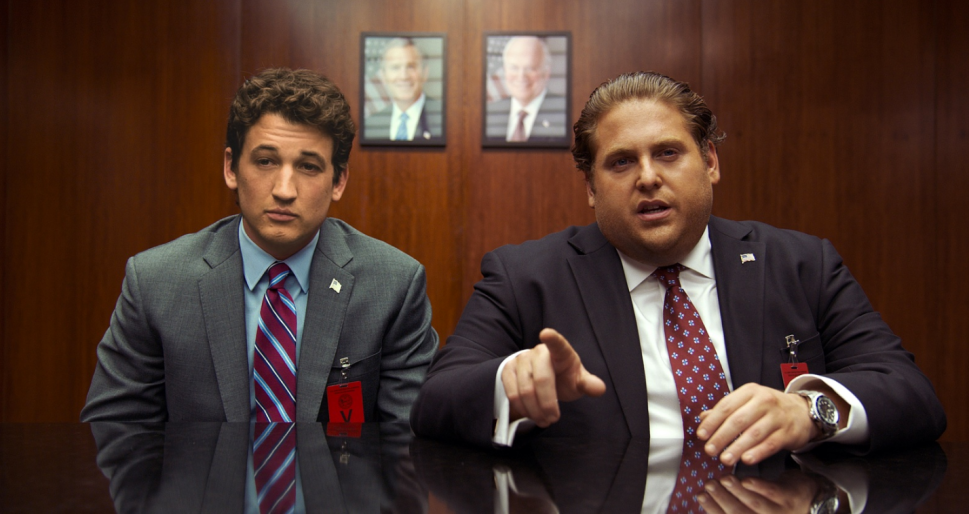