With each party’s convention in the rearview mirror, certain issues are settled.

A few of them: the nation needs earplugs and a windshield for spit and food particles when former New York City Mayor Rudy Giuliani does his Il Duce imitation. Bill Clinton has a rapturously innocent fascination with balloons. Congressman John Lewis, lonely no more, needs to turn his table for one into a table for three, as the country has a new moral conscience in the astounding Khizr Khan and his wife, Ghazala. Hillary Clinton’s chic, soigné white acceptance look owes a debt of gratitude to the “You Don’t Own Me,” finale from The First Wive’s Club, as well as suffragist history.

And while the Democrats stressed colorful, joyful diversity and strength-through-inclusion over four happy days in Philadelphia and by all accounts won the summer, in a four-day Cleveland steamer of a hate rally in Ohio, Donald Trump handily and openly confirmed that today’s Republican Party is, at its core, a white power movement.

What have been decades-long dog whistles are now a roar; what have been nudge-nudge wink-winks are now block letters. What were open secrets, or all-but-unsaid policy points or messaging themes, are all in the open.

If Trump and his supporters had their druthers, they’d make Charles Manson and his supporters proud with all-out Helter Skelter. They have given not just home and sanctuary, but top billing to what was something that was central since the sixties to the Republican party, but was under the surface. Kind of a shameful family secret like an en famille groping or an embezzlement.

Trump and many of his supporters are proud of it. It’s despicable—but at least it’s now in the open. At least it’s out of the closet: it’s all about race. It always was, since Nixon all but it wrapped himself like well-cooked bacon around a scallop, in national security, or small government, or economic opportunity.

So, with that in mind, thank you, Trump! We owe you one.

Here and now, I’m publicly thanking Donald Trump. Not for being the least stable, most narcissistic, least prepared candidate in modern politics. While he is undeniably all of those things, he has settled what has become a nagging, uncomfortable question playing out on the national stage and just under the radar for decades. For the GOP, does it just boil down to race?

We can now say yes: Donald Trump’s Republican National Convention sealed the deal and affirmed without a doubt that the white power movement and the Republican Party have become one.

This is not to say that every Republican is a racist—patently that isn’t so. There remains a country club wing, a Chamber of Commerce wing, a national security wing. But that’s no longer the nucleus.

Thanks to Trump, his message, his campaign, candidacy, the wildly enthusiastic party base that has gone all-out for him; the elected officials and movement leaders on the front lines supporting him like David Duke, and the party that has become all his own and at one with him, we can now incontrovertibly say in no uncertain terms that the Republican Party is a white power movement in its DNA. There is no more dancing around the issue and no more glossing over the naked, ugly fact.

Today’s GOP from its core—its politics, its policies, its sum total—is a gathering of white grievances against black and brown Americans and is a racially motivated movement with a goal of stoking and exploiting race-based conflicts and pushing white supremacy. Economically. Socially.

To be clear: it has come to pass that one of America’s two mainstream political parties is dedicated to the preservation and promotion of white power. Let that sink in.

And it took Trump, whose first foray into New York politics was full page ads in the tabloids weighing in on the Central Park Five, calling for the death penalty and trying to successfully manipulate public opinion against five black teens—remember that?—to blow the cover off this thing.

It came into sharp focus and hit a point of no return as Donald Trump’s Republican National Convention, in all of its white-lives-matter glory, a display so full of race-based anger, resentment, violence, hate and vitriol its collective vein, its swollen pustule, essentially burst open on national television in a raging, screaming, triumph of the shill. That’s all it was, from GOP Grand High Wizard Steve King questioning whether nonwhites have contributed anything to civilization to a caterwauling finale in which an unhinged Trump railed in a manner that would make George Wallace stand tall against immigrants, basically comparing them to rabid dogs marauding through a sleeping (white) town by night. Republican party faithfuls screamed back in rapturous, bug–eyed ecstasy, “Build the wall! Build the wall! Build the wall!”

And proving that it all goes back to Game of Thrones, because everything does, in this version, the white walkers are trying to keep everybody else out.

How did we get here? First, a minor brush-up on party history. 50 years ago, the Great Society flourished under Lyndon Johnson and civil rights legislation was passed and crafted by a coalition of Northeastern and Midwestern liberal Democrats and moderate Republicans. After signing the Civil Rights Act of 1964, Johnson famously quipped of Democrats that they, “just lost the South for a generation.” It turned out, in fits and starts, to be much longer than that.

Richard Nixon, sensing furiousness among Southern whites at being forced to desegregate—and, at least, no longer openly legislate based on race and officially live in a society lawfully separated by black and white—smelled blood and the option of electoral low-hanging fruit. Pursuing what was internally called the “Southern Strategy,” the Republican Party staked its future on appealing to resentful, angry white Americans. That has proliferated. It’s how the base of the GOP moved squarely into the rump of the Bible Belt, and why race-baiting messaging and policies with racial motivations in their DNA have been central to the Republican Party and the conservative movement ever since. I have a bridge to sell anybody who thinks this is all about low taxes.

From the rallying cry of state’s rights; to Reagan declaring his candidacy—and federal government the enemy—in Neshoba County, Mississippi, miles from where three Northern civil rights workers were killed during the Freedom Summer of 1964; to George H.W. Bush’s invocations of Willie Horton and welfare queens; to the “Hands” ad—and entire life, really—of Jesse Helms; to the militarization of police forces to the danger of black men; to the purposeful arming of white America by the National Rifle Association, better known as the Republican Party’s Department of Defense; the furious, disrespectful hate leveled at Barack Obama and his family, by elected officials representing and absorbed by a hateful white mob who fought on barely concealed racial terms.

Remember: as recently as last month Republican legislators don’t just get away with but won favor in the party by citing Psalm 109:8—”Let his days be few; and let another take his office. Let his children be fatherless, and his wife a widow. Let his children be continually vagabonds, and beg: let them seek their bread also out of their desolate places.”

GOP fenders throughout what passes for the heartland blared this in 2012. Most recently, Senator David Perdue of Georgia read this aloud to applause among his caucus. Repulsive.

Finally, Trump: a man who rode the white tiger to victory and won a 17-strong competitive primary featuring some of the most prominent members of the Republican party, by being the one who best pushed women and Americans of color around and who best played to white anger. That’s what it takes to win now.

These steps led the party here: to the general election of 2016 showcasing the afterbirth of a nation; propelled by a wet, hot American dumber led by a great white dope.

Paul Ryan’s career and his brand are based on legislation created to devastate lower income communities of color, in Ayn Randian cynical dystopia, the “takers.” For their part, the Bushes turn their manipulation and acceptance of racist forces on and off as they see fit depending on if it wins an election or not. For his part, Mittens Romney had absolutely no problem begging for Donald Trump’s endorsement when Trump made his first foray into contemporary Republican politics by morphing into birther-in-chief and, once again, mainstreaming a marginal group who insisted that our first black President was not legitimate due to his being born in Africa.

As for the base, about whom I can say nothing good—and for whom that lower back tat removal coverage in Obamacare was ostensibly inserted—they’ve been willingly whipped into white rage by Fox News and talk radio during the Obama Presidency. From Black Santas to New Black Panthers to All Lives Matter to Bill O’Reilly—who maintained last week that the slaves Michelle Obama named as having built the White House were, in fact, happy and well fed—they are motivated by rage and political (and in some case literal) bloodlust.

The party has reached a point where it’s showing its true colors (white, white and white) and fearlessly flaunting their hate and contempt. Donald Trump has emboldened and given shelter, place and pride to the most base instincts and loathsome forces in America and the GOP hasn’t so much capitulated but flung its doors open. The party establishment desperate for an engine and some energy and having sold their souls long ago, has embraced Donald Trump’s campaign which has gleefully united racists, anti-Semites, Neo-Nazis and race warriors and, in one final push, mainstreamed and legitimized some of the most evil elements in our society.

Since Cleveland, the unembarrassable Trump has continued. Doubling down on policies to impose religious litmus tests for Muslims; ramping up plans to round up and expel groups of immigrants. Punching way up in class by attempting to shame Gold Star parents Khizr and Ghazala Khan, who made the ultimate sacrifice. Trump’s version of a sacrifice is letting a female foursome play through on the eighteenth hole at Mar-a-Lago.

Sadly, there’s a huge audience for his hate and fear-filled message—and he intends to ride them all the way to the bottom. It’s up to us to stop him. And Republicans need to prove that, indeed, it’s country first. We are waiting. 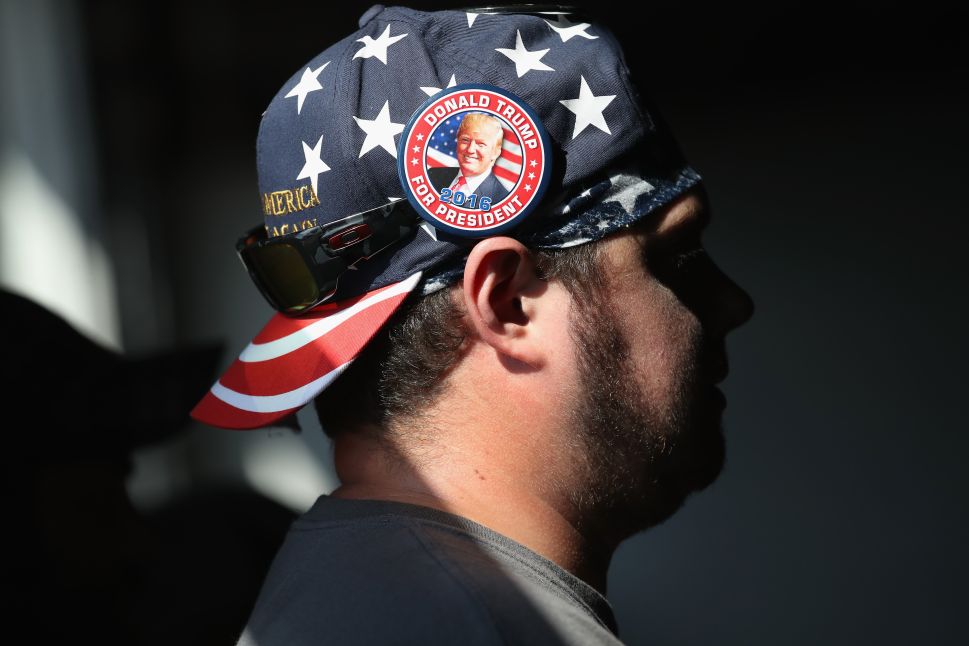