It looks like most of America is better at decision-making than Ms. Fletcher. Although how could any of us really respect her judgment after she kept around Chad (and Vinny) for as long as she did? Once she sent home adorable horse-loving Luke, the game was already over. Her choice was between a slice of white bread and a slice of white bread with big hair that’s not as good at football as his older brother.

Robby (who’s from Florida) took the heartland—the electoral college boost from Texas, Florida, and Pennsylvania would easily have been enough to get him to the oval office if this show were a democracy.

Jordan (from California) captured the coasts, and the Midwest with a few notable exceptions: Minnesota, and Illinois. This reporter’s guess? Fans of the Minnesota Vikings or the Chicago Bears probably wouldn’t have been too happy to a victory go to the little sibling of Aaron Rodgers of the Green Bay Packers.

Jordan also took Tennessee—maybe some loyalty from his days playing football at Vanderbilt?

Jordan vs. Robby doesn’t quite align Democrats vs. Republicans, but Jordan from California seemed to resonate more with blue states and Robby with red. See the side-by-side comparison with FiveThirtyEight’s polls for the upcoming election. It looks like, at least for now, America is better at making decisions than JoJo.

Her latest Instagram caption? “Fight for the fairytale, it does exist.” ….Whatever you say, Jo.

Fight for the fairytale, it does exist. 🦄 @jrodgers11 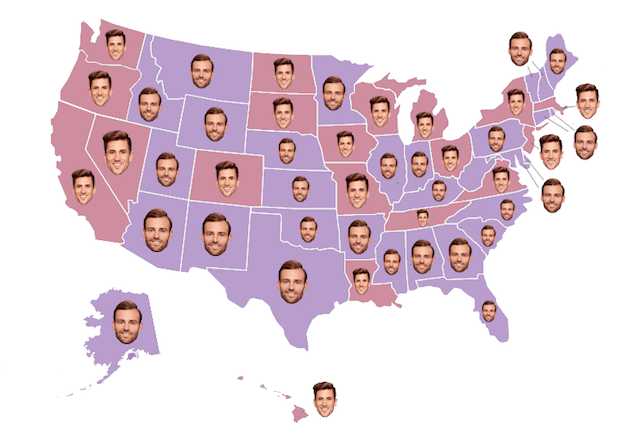