As every scorned artist is always reminding us, the critics hated the Impressionists, too.

But within about 10 years of their first group exhibitions, the French Impressionist painters were both beloved by the public and esteemed by critics. Andrew Wyeth (1917-2009) has one of those—the love and admiration of the general public—but critical acclaim is still largely absent for the painter who is best known for his highly detailed depictions of rural life. At best, one might say that the most virulent haters are dead or are moving on, but the void is still not exactly filling up with love. Maybe there is some grudging respect, which might count as a victory for this most singular of artists.

“I think he’s O.K.—he is sophisticated although kind of boring. Dead and dry,” The New Yorker’s Peter Schjeldahl told the Observer, which is actually an upgrade for Wyeth in the eyes of the 74-year-old art critic. In the past, Schjeldahl has called the artist “immune to fevers of imagination apart from the most idly literal-minded kind” and called his artwork “formulaic stuff not very effective even as illustrational ‘realism.’ ” A Wyeth nude “generates approximately no sensual charge except maybe of a repressed sex-in-the-head, Republican variety that I’d rather not think about.”

Certainly, critics have held the artist’s conservative political leanings against him, as evidenced in Wyeth’s New York Times obituary in which critic Michael Kimmelman found it relevant to point out that “he voted for Nixon and Reagan.” Time magazine’s Robert Hughes disparagingly described Wyeth’s art as suggesting “a frugal, bare-bones rectitude, glazed by nostalgia but incarnated in real objects, which millions of people look back upon as the lost marrow of American history.”

That seems mild compared to what others have said. Robert Storr, for a time curator of Contemporary painting and sculpture at New York’s Museum of Modern Art and currently dean of the Yale School of Art, wrote of Wyeth as “our greatest living ‘kitsch-meister.’ ” Hilton Kramer, art critic at The New York Times and later editor of The New Criterion, complained about Wyeth’s “scatological palette,” which perhaps is a nicer version of critic Dave Hickey’s claim that Wyeth worked in a palette of “mud and baby poop.”

Meanwhile, next time you are visiting the Museum of Modern Art, you might notice that some of the largest crowds are huddled around Wyeth’s 1948 painting Christina’s World, which is hung next to one of the escalators and probably reflects the curators’ own distaste for what is arguably the museum’s most famous painting. “I once asked a guard at the Modern what questions he received most often,” said Jamie Wyeth, the artist’s son and a painter in his own right. “He said, ‘Where’s the men’s room?’ and ‘Where is Christina’s World?’ ”

So, perhaps it is time for a reset in the discussion of Andrew Wyeth. Next year, starting June 24, the Brandywine River Museum of Art in Chadds Ford, Pa., is opening a Wyeth retrospective that will include 100 works (drawings, temperas and watercolors) from the 1930s until shortly before his death. The exhibit, which includes borrowed works from the Metropolitan Museum of Art, Dallas Museum of Art, St. Louis Art Museum, the Whitney Museum of American Art and Crystal Bridges of American Art, as well as a number of other public collections, will later travel to the Seattle Art Museum. Only two museums are participating, sure, but this does not mean there’s a lack of interest, said Audrey Lewis, Brandywine curator and one of the two organizers of “Andrew Wyeth: In Retrospect.” The decision was made because the lending institutions were “concerned about the works being on the road for more than six months.”

Wyeth generally painted in egg tempera, which consists of pigments mixed with an egg yolk binder, on wood, and lending institutions are also “worried that vibrations from the paintings being moved might knock the paint off the wood.” They also feared that changes in temperature during transit would cause chemical reactions in the egg binder leading to what is called “efflorescence,” resulting in white powdery deposits forming on the painting surface. “I think those concerns are overblown, but we have to respect the wishes of the museums willing to lend works to us.” One museum that so far has refused to lend is the Modern, which won’t allow Christina’s World to travel at all.

Next year’s Wyeth retrospective, marking the centennial of his birth, will be the first full-on examination of the artist’s career since one at MoMA in 1976. That affair was a critically unloved event that caused friction even within the institution. Then curator of Contemporary art Henry Geldzahler refused participation, according to Thomas Hoving, the director of the museum at the time, who wrote in his book Making the Mummies Dance: Inside the Metropolitan Museum of Art that the curator said to him, “My clique wouldn’t like having me associated with Andrew Wyeth.”

Other museums have shown themselves to be more favorably disposed to the artist. In 2014, the National Gallery of Art in Washington, D.C., featured 60 works that showed Wyeth’s fascination with windows, and in February of this year the Denver Art Museum concluded a three-month exhibition of the work of both Andrew and Jamie Wyeth. In 2005-06, the High Museum in Atlanta and the Philadelphia Museum of Art teamed up to show approximately 100 works from the Wyeth family collection that revealed both Wyeth’s thematic connections to artists of the past (most notably, Winslow Homer, Thomas Eakins and Edward Hopper), as well as his singular approach to human, landscape and still-life subjects.

“There has been a real ground shift in opinion on Wyeth, seeing him more in context of other American realist traditions and artists, such as Paul Cadmus, Ivan Albright and Edward Hopper,” said John Wilmerding, a retired Princeton University art historian who wrote a catalogue essay for that 2005-06 exhibition. “There has been a debate in recent years among scholars over who was the greatest American realist. Was it Hopper, whose compositions are better known? Or Wyeth, who is technically a better painter?”

Wyeth’s reputation has taken dramatic swings over the course of his 70-year career. In the 1940s and into the ‘50s, he was one of the most esteemed artists in the country. Painter Elaine de Kooning was a big fan, as was Alfred H. Barr Jr., then director of collections at the Museum of Modern Art, who purchased Christina’s World for the institution in 1949. However, by the late 1950s and early ‘60s, a “modern art establishment” was in the process of consolidation that “promoted the avant-garde and found Wyeth to be the antithesis of what they were interested in,” said David Cateforis, an art historian at the University of Kansas and editor of the 2014 Rethinking Andrew Wyeth (University of California Press). “Wyeth was a threat to their values. His popularity with the public was held against him, and his work was met with outright contempt.”

Wyeth’s small town and rural imagery frequently rubs urban (read: most) art critics the wrong way. (“Wyeth’s dreary vignettes celebrate the cultural and social immobility against which the avant-garde has been traditionally locked in struggle,” Robert Storr wrote back in 1990 for a museum catalogue essay that had nothing to do with Wyeth, just because.) Modernist and postmodernist art tends to be urban art—the structure and pace of life and media experienced in cities—while most traditional realists have directed their attentions to the countryside. It is for this reason that critics have tended to see realist art as sentimental and nostalgic. There are not just differing ideas about art at stake but competing visions of America.

Perhaps, commercial success should compensate for art criticism’s version of Bronx cheers, and it may even be that the critical nay saying is a result of the commercial success. Richard Merryman, who wrote a 1996 biography of Wyeth, told this reporter, before he died last year, that “it angers critics that people go to see Wyeth’s work and not so much the work that the critics themselves like.” Evidence of that sentiment may be found in a review of that biography, written by Kimmelman: “Mr. Wyeth is not a great artist. Why, then, should we bother about him at all? Because for half a century his fame has been a barometer of popular taste.” That pontifical view was underscored by art critic Peter Plagens, who ruefully noted that “critics seem to say, ‘This artist already makes a lot of money and is so popular—why should I add to it?’”

The “problem” with Andrew Wyeth is complex; it also doesn’t even stop with the artist himself. His sister, Carolyn, also an artist, sought to be represented by the Tatistcheff Gallery in New York City in the 1970s and was told by Peter Tatistcheff that he would need to check with every one of his other artists for their consent. “My personal feeling toward the whole Wyeth phenomenon is that I wouldn’t want to participate in it,” Tatistcheff said. In another example, the first show that Wyeth’s son Jamie had in New York’s James Graham Modern gallery, in September 1993, was well attended and sold well, but there was not one write-up in any of the city’s newspapers or art magazines. “I think the name Wyeth itself sends out red flags,” Jamie said.

At this point, however, many of the most virulent Wyeth haters have passed from the scene—Hilton Kramer and Robert Hughes are dead; Dave Hickey has retired from art criticism; and both Robert Storr and Michael Kimmelman no longer write about art. A newer generation has begun to take a look at the artist and found a lot to its liking.

“In the 1960s, abstraction was the most dominant form of art,” said Henry Adams, an art historian at Case Western Reserve University in Cleveland, Ohio, who has written about how Wyeth was influenced by early Hollywood films. “Now, the most engaging art tends to the representational, and we have seen a big resurgence in scholars writing about Wyeth’s work. There have been more exhibitions, more scholarship, some dissertations.”

Next year’s retrospective at the Brandywine River Museum will take a chronological look at Wyeth’s work, seeing how his painting evolved over time and how it connects to traditions in American and European art.

Wyeth is dead, and his haters are not far behind, but all that has changed really is the quantity and decibel level of the knee-jerk condemnations. One still needs to push through the crowds to get a close view of Christina’s World at the Modern, and the slow pace of that world is mirrored by how long viewers take the work in. “Wyeth has become a very interesting artist,” Adams said. But, of course, he always was. 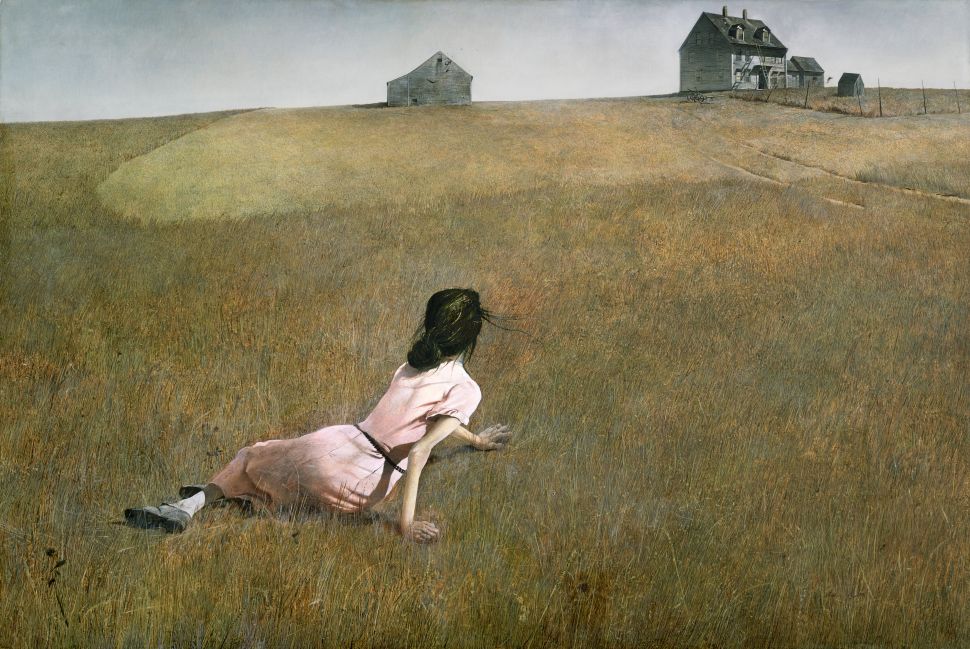